Let's hit rewind! A much closer look at the year's most stirring cinema moments 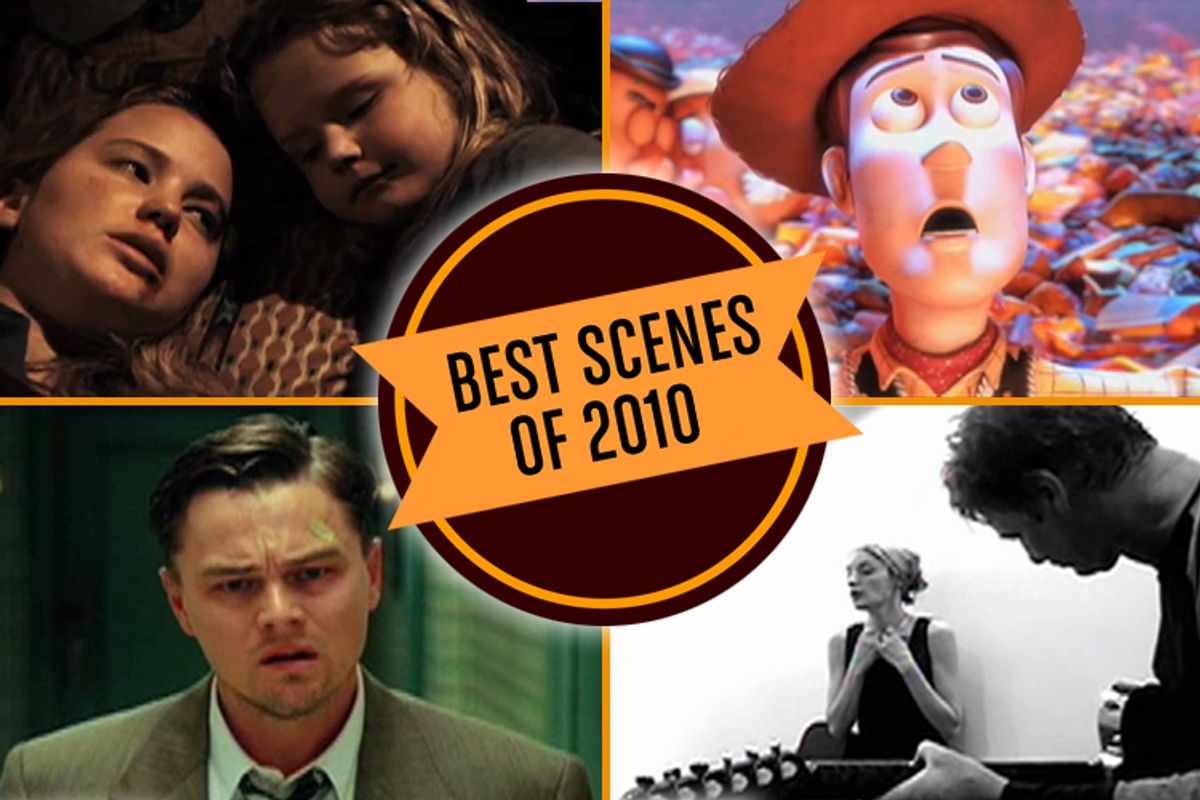 Despite the definitive, down-from-the-mountaintop title of this series -- the Best Scenes of 2010 -- the group of 10 video essays we're unfolding over the next day is less about list-making than exploration. It's an opportunity -- an excuse, really -- to zero in on the DNA of movies: the shots and cuts, lines of dialogue and music cues that illustrate a film's personality and sum up its style, themes and sense of life. We're launching with the last three in the series, and we'll keeping rolling out more entries till we hit No. 1 on Friday afternoon.

The scenes run the gamut in terms of genre, budget and storytelling mode. There are a spectacular action sequence, grueling suspense scenes, two dreams, a mortifying display of family dysfunction and a couple of intimate moments so dependent on pop songs that they could double as stand-alone music videos. The most popular movie on this list cost $200 million to produce and has already grossed a half-billion worldwide. The smallest cost less than a used car and was such a labor of love that it didn't open in U.S. theaters until five years after its completion. Taken together, these 10 scenes give a sense of the dazzling range of movie year 2010 and illustrate the idea that there is no single, irrefutably "correct" way to make a good movie. It's all about the material and what the artists do with it; in other words, alchemy. We can parse the result, but only up to a point.

Casual moviegoers should be warned that because this series is more about form than content, we're not concerned with protecting virgin eyeballs. At least two of the scenes are taken from the very end of plot-driven films. Most of the rest showcase pivotal moments in the lives of their characters. Spoiler alerts have been affixed to a couple of the videos, but readers are strongly encouraged to read the articles and the title cards leading up to each scene, and decide how much they value plot before going further.

One final note on the videos themselves. Rather than stop the scene or mute the dialogue to allow for voice-over commentary, we've decided to let each clip play out in real time, with observations appearing in the letterbox area of the image. We strongly recommend watching each scene all the way through without looking at the text, then running it again and scanning the notes as the scene plays out again. You can use the play/pause button and the toggle bar at the bottom to pause, rewind or skip forward. The videos are also embeddable (the code automatically cuts-and-pastes to your computer's clipboard when you click that option). And they can be enlarged to full-screen size by clicking the little TV symbol.

To enjoy all the entries we've published so far, click here.