Whatever happened to the "ground zero mosque"? 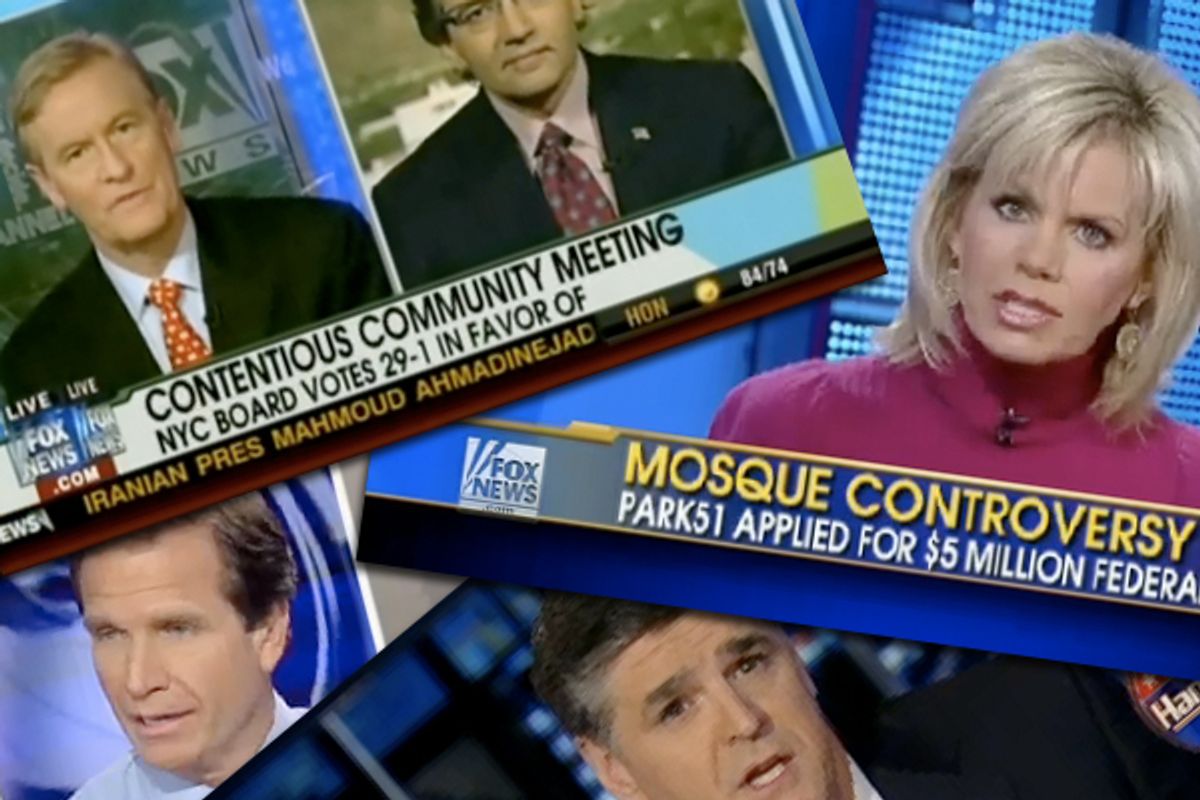 Punch the terms "Park51" and "Ground Zero Mosque" into Google News' timeline creator and this is what you get:

To be sure, Google News is a blunt instrument for measuring volume of press coverage. But the timeline nevertheless conveys a lot about the strange, still somewhat inexplicable burst of coverage surrounding what became known as the "Ground Zero Mosque."

The story began inorganically, with misleading framing pushed into the mainstream by a right-wing blog and the New York Post. It evolved into the national political obsession of the summer and, finally, into a midterm election issue. And then, just like that, it disappeared.

The course of the media coverage had little to do with the facts on the ground at 49-51 Park Place in lower Manhattan, the proposed site of the mosque. To review what happened:

News of the proposed Islamic community center first broke in a front-page New York Times piece in December 2009, but it garnered very little attention. The attention it did receive -- including from the likes of Fox News -- was positive. Then in May, when the project was facing some local bureaucratic hurdles, anti-Muslim blogger Pamela Geller stepped up her coverage of what she called the "Monster Mosque" of "Death and Destruction." The New York Post adopted Geller's perspective on the project: that it was something to fear and defeat. (See Salon's detailed timeline on the origins of the story here.)

The first peak in the coverage came when a wave of national Republican figures weighed in. Rudy Giuliani, Newt Gingrich and Tim Pawlenty each took shots at the project and its organizers. Sarah Palin took to Twitter to call on "peaceful Muslims" to "pls refudiate."

Meanwhile, the proposed community center had gotten all the necessary regulatory approvals -- though there were (and still are) serious questions about whether the organizers could raise the money needed to make the project a reality.

Again, very little about the project itself shaped the media coverage. There were distortions that are, at this point, well known: A mosque was only a small part of the proposed center; it was not at ground zero, but a few city blocks away; the organizers had been operating a progressive mosque in a nearby neighborhood for many years; there were no links to terrorism; lead organizer Imam Feisal Abdul Rauf had in fact worked with both the Bush and Obama administrations promoting the United States in the Muslim world.

The second peak in coverage came in mid-August when President Obama weighed in at a press conference, citing religious freedom. Those comments gave political reporters an excuse to keep writing about the story for weeks.

But then, after a last gasp in October in the run-up to the election (including a few memorable anti-mosque campaign ads), the story all but disappeared. What changed? Well, on the ground, exactly nothing. The organizers had not changed their plans. Fundraising continued.

There can be no single explanation for why a news story of this magnitude disappears. But, given the timeline here, it seems likely that the electoral calendar played a role. National Republicans who used Park51 as a bludgeon against Democrats suddenly were less interested in talking about the project after the election. In addition, there was suddenly action in Congress again after Nov. 2. And political analysts turned their focus to what Washington would look like with a Republican House majority in 2011.

The media, too, decided that a proposed Islamic community center in Manhattan was not deserving of daily, granular coverage. Looking back now, it's pretty good evidence of a manufactured story when coverage spikes and then vanishes, even as nothing has fundamentally changed.

In 2011, the "ground zero mosque" story will probably live on -- but primarily on Fox News and Pamela Geller's blog. It's unlikely that anyone else will pay much attention ever again.