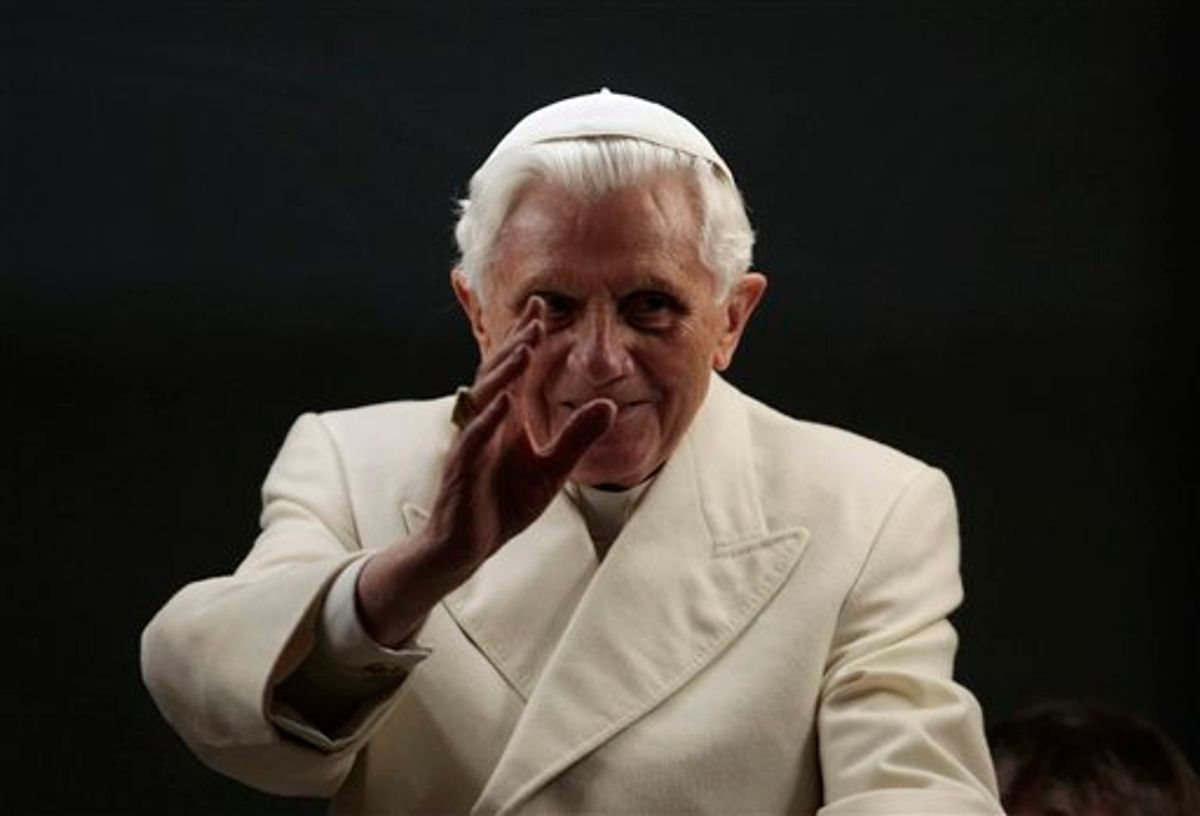 Pope Benedict XVI blesses the faithful as he arrives in St. Peter's square to bless the nativity scene at the Vatican, Friday, Dec. 31, 2010. Pope Benedict XVI marked the final hours of 2010 on Friday with public prayer and a word of concern for families struggling with economic troubles. Benedict gave thanks for God's grace and love throughout the year as he presided over a traditional New Year's Eve vespers service in St. Peter's Basilica. (AP Photo/Gregorio Borgia) (AP)
--

Pope Benedict XVI urged Christians to remain strong in the face of intolerance and violence in a New Year's appeal Saturday that came hours after a bomb blast outside an Egyptian church killed 21 people as worshippers left Mass.

The pope condemned a widening campaign against Christians in the Middle East in his homily at St. Peter's Basilica, echoing comments last month in which he called a lack of religious freedom a threat to world security.

"In the face of the threatening tensions of the moment, especially in the face of discrimination, of abuse of power and religious intolerance that today particularly strikes Christians, I again direct a pressing invitation not to yield to discouragement and resignation," he said.

Benedict has repeatedly denounced a campaign against Christians in Iraq blamed on al-Qaida militants, including an October attack on a Baghdad Catholic church that claimed 68 lives, two of them priests.

The Vatican is very worried that a steady exodus of minority Christians from Iraq will permanently reduce their numbers and discourage the wider community of Christians in the Middle East.

Benedict cited what he called two negative extremes at work in the world: secularism, "pushing religion to the margins to confine it to the private sphere," and "fundamentalism, which instead would like to impose (religion) with force on all."

On Saturday, a bomb exploded in front of a Coptic Christian church in the Egyptian city of Alexandria, killing at least 21 people in an attack that raised suspicions of an al-Qaida role.

Benedict recalled his speech last month in which "I stressed that religious freedom is the essential element of a state of law -- you cannot deny it without, at the same time, undermining all rights and fundamental freedoms."

After leaving the basilica, the pope removed his gold-colored robes, donned an ermine-trimmed crimson cape to guard against the chill, and greeted from his apartment window pilgrims and tourists in a packed St. Peter's Square.

The new year, he said, is an opportunity to reflect "on the great challenges that our epoch poses to humanity," calling the threats to religious freedom urgent.

"Wherever religious freedom is effectively recognized, the dignity of the human person is respected to its root, and through a sincere search for truth and good, moral consciences are shored up and institutions and civil coexistence are reinforced," the pope said. "That's why religious freedom is the privileged way to build peace."

Benedict also announced that in October he will make a pilgrimage to Assisi and invited non-Catholic Christians as well as world religious leaders to join him in the Umbrian hill town of St. Francis.

He said he wanted to mark the 25th anniversary of a similar pilgrimage made by Pope John Paul II and highlight his conviction that "the great religions of the world can constitute an important factor of unity and peace for the human family."