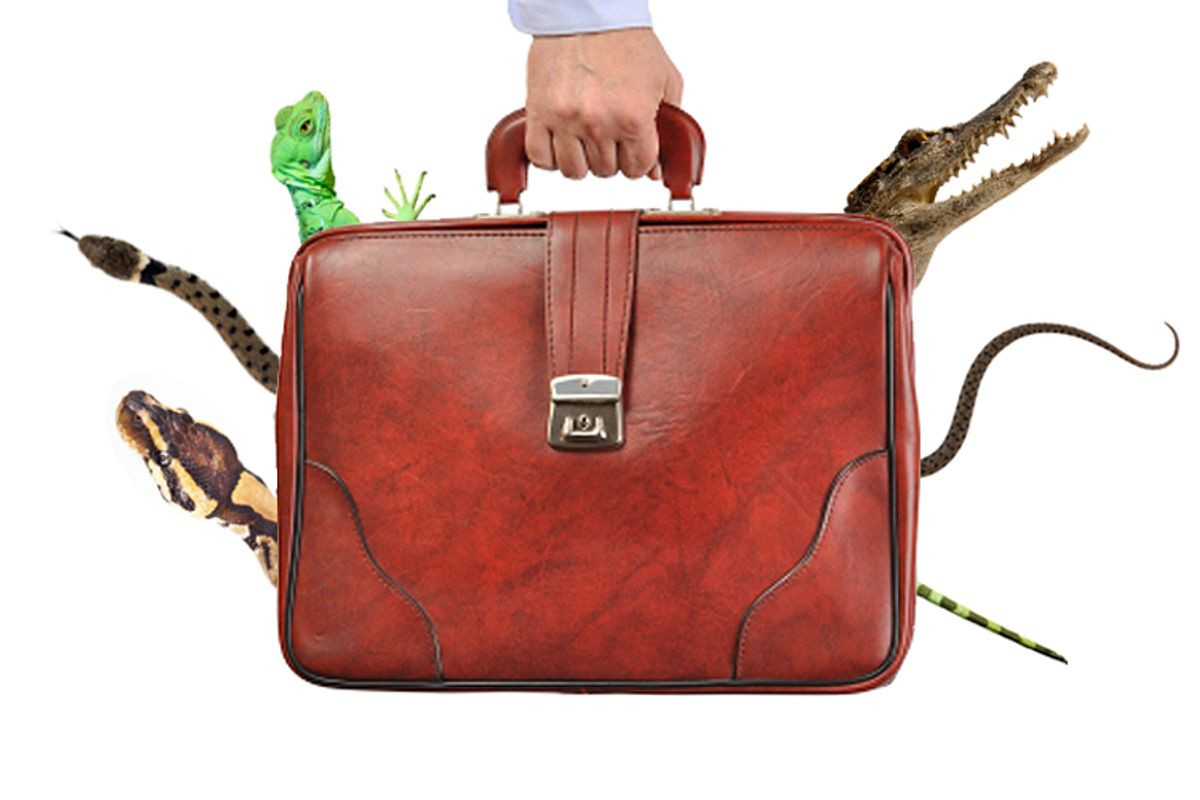 Any work of nonfiction that contains the sentence "He boarded a plane to Stuttgart with a Tasmanian devil in his hand luggage" is a title worth attending to, but when the man with the carnivorous marsupial in his carry-on is merely a supporting character — and not the most interesting one at that — it's time to cancel your dinner date and take the phone off the hook. Jennie Erin Smith's "Stolen World: A Tale of Reptiles, Smugglers, and Skulduggery" is a book that fully justifies such measures, a flabbergasting chronicle of atrocious behavior, foolhardy schemes and dangerous animals that reads like a real-life Elmore Leonard novel. (And yes, a lot of it takes place in Florida.)

"Stolen World" is the story of two men, Hank Molt and Tom Crutchfield, who, at one time or another since the 1960s, have been players in a shady, scruffy scene that Molt refers to as "the reptile world." It is populated by men who have been obsessed with scaly creatures since their youth and have devoted their adulthood to studying, collecting and trading in the animals, frequently in contravention of U.S. and international law. They are, in short, snake geeks, although the geekery of this particular subculture has a distinctly bikerish aspect, complete with ponytails, tattoos and stints in the federal pen.

As Smith details in an obligatory but blessedly short potted history of biological-specimen collection, there has long been a class divide between the academically credentialed pooh-bahs ensconced in museums and zoos and the "shooters and baggers" who are sent off to remote areas to bring back the goods. Despite their own lack of scholarly background, the field men often considered themselves the "true naturalists," while the "museum men" regarded their emissaries as semidisposable grunts. Roaming the tropics in search of rare vipers and geckos is not only extremely perilous; it can also turn the men who do it into risk junkies and "did not," in the opinion of one 19th-century collector's daughter, "fit them for so-called civilization."

Molt belonged to a generation of guys who grew up reading the two-fisted, pith-helmeted adventures of Frank "Bring 'Em Back Alive" Buck, and by 1970, when he first ventured to New Guinea in search of the elusive Boelen's python, he'd already been running a rowdy, mammal-free pet shop in Philadelphia for a couple of years. The mentally disturbed ex-con who lived over the store helped out when he wasn't setting fire to police cars or shoplifting "large quantities of meat." "He had a talent with the animals," Molt said of this individual. "Plus you couldn't make him go away — he would burn your house to the ground."

At that time there were few regulations on the international animal trade, rendering it an industry "totally devoid of conscience," according to Molt — a man who by his own account seems to have tried to swindle everybody he ever met. Soon enough, restrictions tightened, most notably in 1973, when the U.S. signed on to the Convention on International Trade in Endangered Species and President Nixon signed the Endangered Species Act.

After that, Molt and his cronies (he had a knack for gulling naive young snake buffs into serving as his mules — and paying him for the privilege to boot) were obliged to become smugglers in earnest. They hid contraband reptiles in crates with false bottoms, in cassette tape cases, and amid their socks and underwear — even strapped to their bodies. One man had to persuade an airport security officer that the strange lump in the small of his back was a tumor. Another carried several Fiji iguanas into the U.S. inside his prosthetic leg. Still, Molt has his limits; he refused to go through the airport with an early protégé, a taxidermy enthusiast who traveled with "a suitcase filled with knives and dead birds and LSD."

Even the most prudent of Molt's factotums ran into trouble, like the guys who had to immobilize the cobra that got loose in their room at the Zurich Airport Holiday Inn. A disgruntled junior smuggler broke into Molt's shop and stole his best illegal stock, demanding, as ransom, money that Molt already owed him. He got the cash, but then made the mistake of getting into a car with Molt, who choked him until he gave it back. "We were running more on testosterone than common sense at the time," the ever-quotable Molt confessed to Smith.

Eventually, Molt got busted and did time, apparently never grasping that his habit of conning even his closest associates, then sending them multipage letters filled with baroque threats and abuse, did not foster the minimum level of trust that even crooks need to run a profitable business and elude the authorities. As Molt's star waned, Crutchfield's waxed. With his background in the Southern tradition of private roadside zoos, Crutchfield knew enough to treat his suppliers well (he was famous for dispensing Rolex watches) and was more responsible than the hard-drinking Molt. His employees, however, suffered his explosive temper, which they attributed to steroids, since Crutchfield was an obsessive weight lifter who removed all his body hair with depilatories and covered the walls of his house with floor-to-ceiling mirrors so he could watch himself pop a muscle whenever he felt like it. He once threw a peach pit "so hard it chipped the window of his office."

Crutchfield got fairly rich, but he also ran afoul of the law, which led him into a feud with Molt, who, after serving his time, had created a bogus research institute, a "not-for-profit corporation with the sole purpose of defrauding Papua New Guinea of its choicest reptiles." In time, Crutchfield's legal defense encompassed forged documents, files obtained from the San Diego Zoo under mysterious circumstances, and a Southern lawyer who claimed that Fiji iguanas, when in their natural habitat, were regarded as "the chickens of the trees. The natives eat them" (a lie). Crutchfield and his lawyer attempted a double-cross of Molt that Molt parlayed into a triple-cross of Crutchfield.

All these escapades will take you through a little more than half the book, in which you will learn, for example, that there is nothing that agents of the U.S. Fish and Wildlife Service hate more than being referred to as the "duck cops," and that the line between dodgy animal smuggler and respectable zookeeper can be vanishingly thin. And there's still more to come: the infamous theft of 74 extremely rare plowshare tortoises from a reserve in Madagascar ("one of the heists of the century" according to the New York Times) and an Ethiopian caper involving a recently discovered variety of deadly mountain viper. Smith spent the better part of a decade nailing down the facts of each of these murky events, and she delivers them with an often hilariously laconic deadpan.

Yet the abundant human comedy in these stories never entirely distracts Smith from a central, piteous irony. As often as the major figures are commended by their confederates for "loving the animals," you can't help but notice how many of the poor creatures end up dead as a result of their exploits — frozen, starved, infected, suffocated or simply battered while in transit or under the "care" of the inexperienced and negligent. You don't even have to like reptiles to wind up feeling sorry for those rare and striking enough to attract the covetous attention of Molt, Crutchfield and their ilk. If that's love, the humans could teach the reptiles a thing or two about coldbloodedness.

Books Crime Noble Beasts Nonfiction Our Picks What To Read