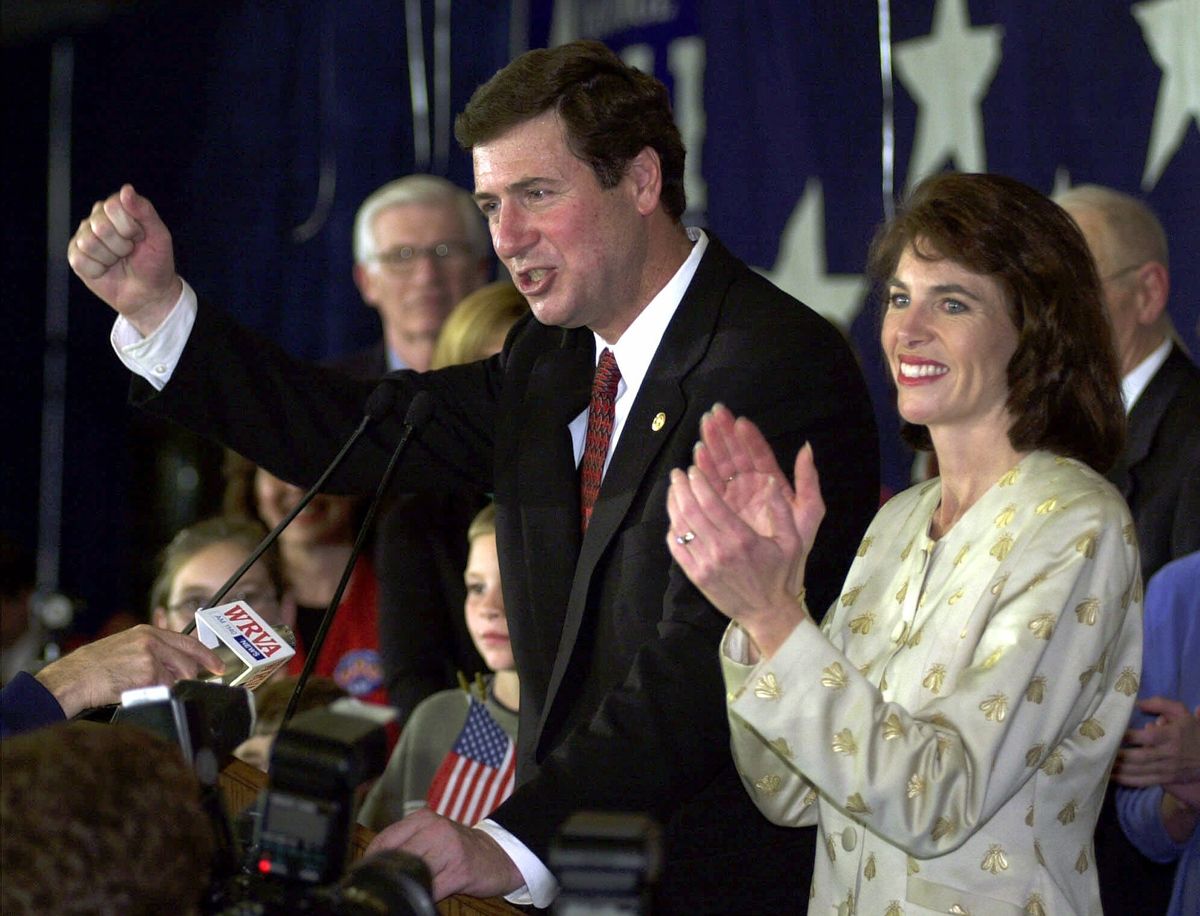 Senate candidate George Allen reacts to the cheers of the victory party along with his wife, Susan, in Richmond, Va., Tuesday, Nov. 7, 2000.
--

Last week, the Washington Post explored George Allen’s likely pursuit of a rematch with Sen. Jim Webb, the Democrat who unseated him in 2006, next year -- and the potential that Allen could face a stiff GOP primary challenge from the right.

The Post was smart to play up the likelihood of a primary battle; Allen would only be the latest prominent conservative to be targeted for supposed ideological impurity in this Tea Party era. But there's a bigger problem with Allen's comeback attempt, one that goes far beyond his own party's base: He is fundamentally a creature of Virginia's political past -- to the point that he would have a difficult time reclaiming his seat despite Webb’s currently weak poll numbers.

Before his infamous meltdown in '06, which was triggered by his infamous "macaca" moment (and also by Michael Scherer's report here at Salon about Allen's use of the n-word as a collegian). Allen had earned recognition as a shrewd politician, an up-and-comer who had won the three major races of his career in resounding fashion: for a seat in Congress in 1991, for governor in 1993, and for the Senate in 2000 (by defeating two-term incumbent Charles Robb).

As a campaigner, Allen matched his bread-and-butter issues -- opposition to abortion and support for the death penalty (and tough-on-crime policies in general) -- with unrelenting efforts to tie his opponents to Democrats who were (then) unpopular in Virginia -- mostly notably Bill Clinton, whom Allen made the focal point of his nasty race with Robb.

But the Virginia of 2010 is not the Virginia of the early 1980s, when Allen launched his political career as a member of the House of Delegates, or even the Virginia of 2000, when he last won elected office. Allen captured the governorship on the cusp of the 1994 Republican Revolution and ousted Robb while George W. Bush was running well ahead of Al Gore on the top of the ballot. Today, Virginia is a burgeoning swing state, and the issues that Allen relied on are no longer as effective or simply as important.

Granted, Virginia is hardly a blue state right now. Republicans easily recaptured the offices of governor, lieutenant governor and attorney general’s offices in 2009, and won three new House seats this past November (and came within a hair of picking up a fourth).

But the broader trends are unmistakable. Mark Warner, a Democratic senator who served as governor from 2001 to 2005, is Virginia’s most enduringly popular leader today. And, more importantly, President Obama defeated John McCain in the Commonwealth in 2008 on the back of impressive strength in Fairfax, Loundoun, and Prince William’s Counties. Democratic-friendly Northern Virginia continues to grow exponentially, and very early poll numbers for 2012 suggest that Obama will be stronger in the state than conventional wisdom might suggest. What was once red is now purple.

Consequently, Allen -- even if he were to fight off a challenge from the right and claim the GOP nomination -- would have a difficult time gaining his footing in a general election. Like many Republicans in the 1990s, he rose to state and national prominence with a caustic political approach. But he had few accomplishments during his one term in the House and one term in the Senate, and those accomplishments Allen had as governor -- going after the welfare system and abolishing the state parole system -- have zero resonance with the current electorate.

The rise of Bob McDonnell, the state's current Republican governor, is strong evidence of this. McDonnell may be as conservative as Allen, but in campaigning for governor, he avoided much of the poisonous, reflexive partisanship that Allen relied on, winning easily on a banner that deemphasized abortion and gun rights and has remained popular through 2010.

Of course, the outcome of the '12 race will depend heavily on two other factors: Obama’s own popularity and Webb’s status. If the economy remains stagnant (or worse), Obama's presence will badly hurt down-ballot statewide Democratic candidates, buoying even a flawed GOP candidate like Allen. And if anyone might conceivably say "screw it" and leave the cushy Senate, it would surely be a loner like Webb, who has shown virtually no interest in the perks of power. With Webb out, Allen’s chances would brighten significantly, because in politics, as Harry Reid just showed, you can never beat something with nothing, and the Democratic bench in Virginia is very thin. Either way, Allen’s only asset with nonconservatives would be name recognition.

That Allen would even want to stage a comeback is itself telling, given that when he was in office he was known to be largely uninterested in his Senate career and saw his seat mainly as a springboard for a run at national office in 2008. Obviously, that plan didn't pan out, so perhaps it should come as no surprise that the old pol is bored and itching to get back in the game, even if it is to win what is probably a consolation prize to him.

Still, Allen is a political anachronism, one that will be exposed even more clearly if he runs. "Macaca" may have been a slip-of-the-tongue, but it also exposed the inherent risks of living on the political edge as Allen always has. It cost him in 2006, and it could cost him again in 2012.