A whitewashed version of Twain's novel is on the way. Is that the worst thing in the world? 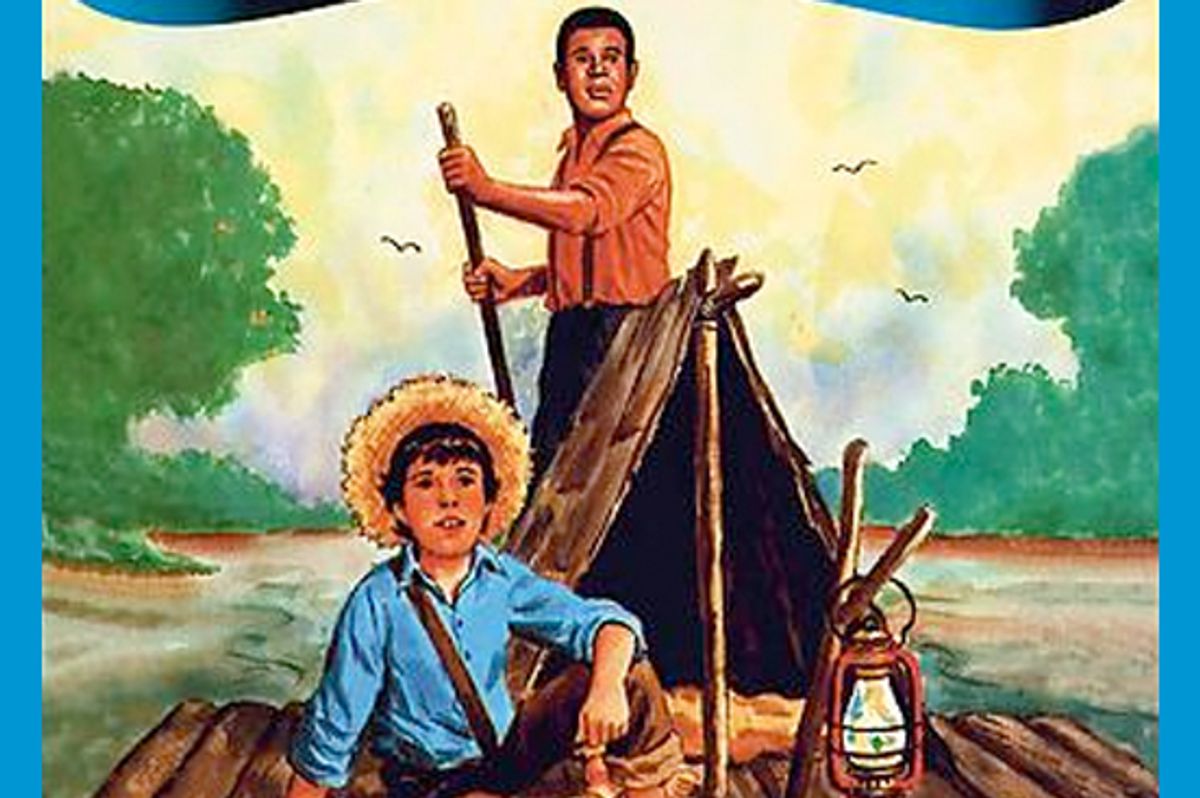 If we can cut out the offensive words in the radio version of a hit song or a sitcom based on a Twitter stream, why not do it for a great American novel? On Tuesday, Publisher's Weekly announced New South publishing will release a new, racial epithet-free version of "Huckleberry Finn." So go bleep yourself, Samuel Langhorne Clemens.

The literary canon is full of works whose language and themes make modern readers bristle. Right now, you can see Al Pacino in a searing Broadway production of "The Merchant of Venice," and wince at Shakespeare's depiction of the greedy Jewish money changer Shylock. You can pick up "Tropic of Cancer" at the bookstore and revel in the truly epic profanity and misogyny of the characters. And if you should flip open a random page in "Huckleberry Finn," you will likely see enough N-bombs to constitute a week's worth of Chris Brown's Twitter stream. The word appears 219 times in the text. But while Shakespeare's and Henry Miller's and a slew of other authors' works are generally relegated to the bookshelves of adults, Mark Twain's novel has for years endured an uneasy relationship with the reading lists and libraries of children. Is it a classic work of young adult literature, or a racist tract? Should it be removed from school curricula, pulled from the shelves of libraries? It's one of the most banned books in print.  It's also one of the most beautiful.

So why shouldn't New South produce a slurless version of the book? Publishers abridge classic works to suit the reading and maturity levels of different audiences all the time. And if a youngster can thrill to the adventures of the boy Huck and runaway slave Jim without the upsetting presence of unrepeatable words, is that a bad thing? Auburn University professor and Mark Twain scholar Alan Gribben, who has adapted the novel for New South, doesn't think so. "This is not an effort to render Tom Sawyer and Huckleberry Finn colorblind," he told P.W. "Race matters in these books. It's a matter of how you express that in the 21st century." To that end, he's substituted "slave" for "nigger" throughout the text. He's also swapped "injun" for a less incendiary term as well.

The unease that many contemporary readers feel when facing Twain's characters is natural and appropriate. It's certainly something to be keenly attuned to, especially when introducing the book to children. I have a tough time imagining my kids sharing the experience of reading the words "Jim had an uncommon level head, for a nigger" with their fellow students in school, let alone saying them out loud in their classrooms. I sure as hell wouldn't envy the teacher whose job it was to steer the discussion afterward. And it's not as if Twain's original version is going away. New South is simply giving educators and other readers the option of enjoying Twain's work without tripping over a derogatory term, especially one coming from its hero.

And yet, as painful as it often is to confront head-on the issues of race -- and our often conflicted-to-downright-nightmarish American history with it -- I believe librarians and educators and parents owe it to kids to do more than simply excise out the bad words, to participate in the implicit fiction that Mark Twain's pre-Civil War characters, living in the South, existed in a world where they weren't spoken. To do otherwise is as dishonest as tacking on a happy ending to "Anne Frank: The Diary of a Young Girl."

When my elder daughter was in the second grade, her teacher did a special exercise on Rosa Parks' birthday. She lined up the chairs in the class two by two and asked all the kids to sit down. Then she had the ones who were white move to the front and all the kids who were African-American sit in the back. Mixed race? Latino? Get in the back too. This, she explained, is what you would have had to do if you wanted to ride on public transportation in many parts of our own country, not that long ago. You couldn't sit with your friends. You couldn't sit where you wanted, until Rosa Parks helped change things. That afternoon, as we rode a real bus to pick up her sister from nursery school, my daughter told me the story, amazed. Did I know this had happened? Could I believe it? It shocked her, and I'm forever grateful to her teacher for that shock.

As my girls grow up, they -- and their friends -- hear older kids throwing around Huck Finn's controversial word on a regular basis. They hear it outside the local middle school, they hear it down at the park. They know that it's hurtful and that that's why we don't say it, but they don't quite understand why it's so common. Someday I want to hand them an unexpurgated copy of "Huckleberry Finn" and say, this is why. Because people used to be treated like property because of the color of their skin. Because to call someone that distinguished him as something not quite human.

It's a tough task to invite readers to think. It's far more difficult than handing someone a book, worry-free, and saying, enjoy yourself some Norton Juster! It requires exhausting amounts of work, deep wells of compassion, and an open acknowledgment that our acceptance of a work and its author's intent will be considerably affected by our own race, religion, gender and sexual identity. My daughters and I, after all, will never be called that contentious word of which Twain was so very fond.

But sensitivity doesn't have to mean censorship. Years ago, Dorothy Allison wrote the definitive last word on these matters in her essay "This Is Our World." "Art," she wrote, "should provoke more questions than answers and most of all, should make us think about what we rarely want to think about at all." And it should make us look at things that are very hard to look at. Twain understood that. He didn't shy away from Huck's flaws and his small-mindedness. He didn't shy away either from his bravery and love. He didn't make it easy for readers to unconditionally embrace that scamp; he didn't want to. That was his genius. If a modified version of Twain can bring that brilliance to a new audience, that's probably not the worst thing in the world. But the great satirist who created Tom Sawyer would surely appreciate the irony of finding himself subjected to such an impressive, selective whitewashing.