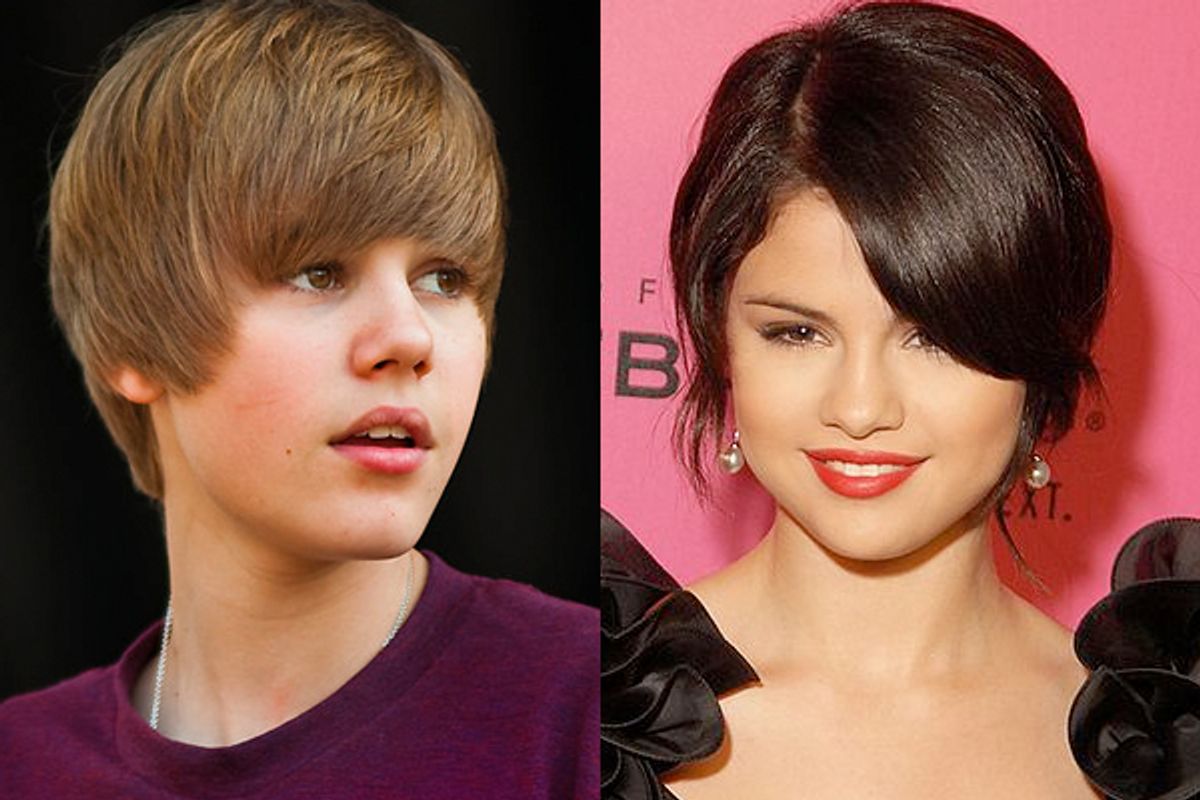 Girls are made of sugar and spice and everything nice, and they will cut your goddamn heart if you get between them and Justin Bieber.

When Life & Style magazine published photos Monday of the blow-dried Canadian tween sensation canoodling in St. Lucia with "Wizards of Waverly Place" star Selena Gomez, the prepubescent Internet promptly rioted in outrage. "I'll kill you I swear on GOD!!!" tweeted one irate Bieber fan, while another was less subtle, calling her a "Whore cancer whore" and threatening, "stay away from Justin pedophile, retard wait i'm gonna kill ya in the night underneath your smelly bed." I think my favorite is from the kid who goes by Mrs. Bieber, who threatens " SELENA GOMEZ I KILL YOU I PROMISE" shortly after admitting that "Jaden [Smith] is better." [Note to Jaden: Keep your girlfriends on the low.]

Though it may seem absurd, the passion of those bloodthirsty, punctuation-challenged Bieber fans is undeniable. Young boys get the biggest bad rap for aggression and out-of-control hormones, but anyone who's ever been a girl -- or in the presence of one -- knows that all that's separating the average pack of fifth-grade females from a feeding frenzy is a few chords of "Baby Baby." If you're a woman, chances are you've shrieked your head off to the Beatles or Duran Duran or N'Sync or maybe Olivia Newton John at one time or another. You've shaken like a leaf and burst into tears outside the hotel where David Cassidy or Nick Jonas was staying, your body going into shock at the mere proximity of an idol. And that pitch of emotion -- hysteria in the classic, oft misused and always disparaged sense of the word -- is a significant part of the joy and terror of growing up.

Culturally, we often claim that boys are just animals, that they're all dogs, that they're only after one thing. And we treat girls like the guardians of virtue, delicate flowers passively waiting to blossom and share their, uh, pollen. So the moment a girl feels that frisson of something intense inside her, something bigger than the old "He's so cute in that non-threatening boy way," it's like a bomb going off inside her brain. Hence the screaming.  Hence the stampeding in shopping malls. Right now, lovesick boys aren't tweeting their intention to pop a cap in Justin Bieber for getting close to Gomez. And if you followed the appalling, harrowing chronicle of Jessi Slaughter last year, you'd know that threats, bullying and out-of-control behavior are not the exclusive province of either gender.

But what's relatively new is that all those dark, immature "Why is he with her and why can't she just DIE?" thoughts now have a platform -- and often, an assenting audience. It's one thing to doodle idly in a notebook during geometry class. It's quite another to have the means to directly tell Selena Gomez or Miley Cyrus or Demi Lovato that she's a slut and a whore and deserves to die. Ah, Twitter, you great equalizing train wreck, you.

The odds are good that anyone who gives a crap about who Justin Bieber is kissing these days is well under the age of 18. So let's ergo assume that anyone posting her wishes for Selena Gomez's speedy demise has a family that either doesn’t know or doesn't care what she's publishing for the universe. And that's tremendously sad. Because that wild jealousy, those intense, early lust sentiments that are still so new aren't just terrifying to read -- they're likely scary as hell to the girl who's feeling and expressing them. And without any guidance on how to behave with compassion or restraint and not blurting out death wishes, she and everyone in her circle are in for a world of pain.

Before long, that girl posting her wishes for "a hit on" Selena will outgrow her childish attachment to Justin and Jaden and all the rest. But she'll still have desires and envy and anger. Only it'll be toward the kid in English class. It'll be for his girlfriend. And unchecked and unguided, those over-the-top little Gomez haters of today are the mean girls of tomorrow. But by then, they won't be gunning for a Disney star. They'll be aiming their rage squarely at your own kid.