Debt ceiling dilemma: How do you win a fight with crazy?

Obama's biggest drawback in the upcoming fight over how the U.S. pays its bills will be his sanity 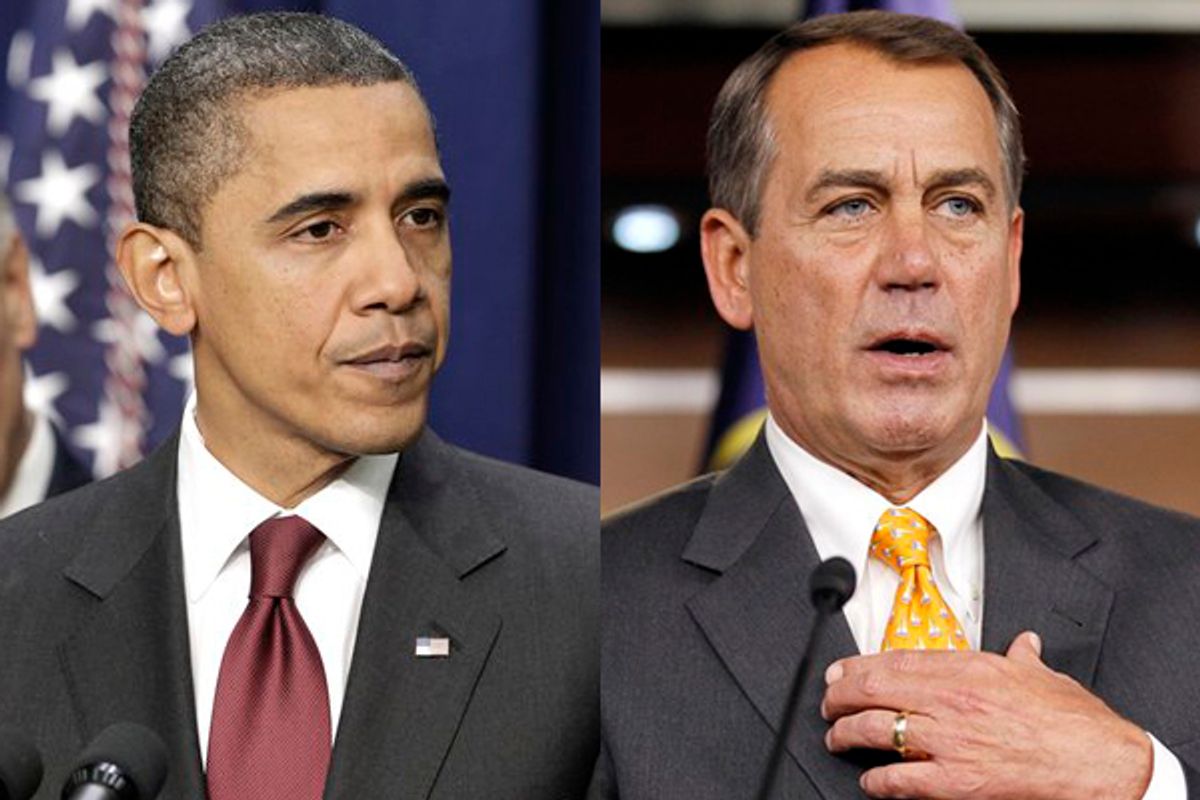 It's a new year, and the time is ripe for a new political battle, full of sound and fury and posturing about government finances. Tax cuts are last year's news; the stage is now clear for a furious struggle over the "debt ceiling" -- the legal limit, set by Congress, on how much debt the U.S. government is allowed to carry on its books. The current limit is a ridiculous $14.3 trillion, and the current best guess is that we'll smack head on into that wall sometime in early March.

Since it doesn't bear the responsibility of actually governing, which includes signing the checks that pay the bills, the minority party always enjoys the luxury of decrying the necessity of raising the debt ceiling as a national disaster, a stain on the Puritan DNA that traces back to the frugal colonists of old. Unfortunately, such tactics can come back to bite you -- conservatives are having lots of fun letting fly with cries of hypocrisy this week, as they pass around a quote from then-Sen. Obama uttered in 2006, when Republicans controlled the White House and Congress. (During the Bush administration, the national debt almost doubled, from 5.6 to 10.6 trillion, requiring numerous "adjustments" of the debt ceiling.)

"The fact that we are here today to debate raising America's debt limit is a sign of leadership failure. It is a sign that the U.S. Government can't pay its own bills. It is a sign that we now depend on ongoing financial assistance from foreign countries to finance our Government's reckless fiscal policies. Increasing America's debt weakens us domestically and internationally. Leadership means that 'the buck stops here.' Instead, Washington is shifting the burden of bad choices today onto the backs of our children and grandchildren. America has a debt problem and a failure of leadership. Americans deserve better."

But four years later, Obama's favorite economic advisor/pit bull, Austan Goolsbee, is singing a different tune. On ABC's "This Week," he warned Republicans not to play "chicken" with the debt ceiling, telling co-host Jack Tapper, "This is not a game. You know, the debt ceiling is not something to toy with ... If we hit the debt ceiling, that's essentially defaulting on our obligations, which is totally unprecedented in American history."

The potential economic consequences of failing to raise the debt ceiling, or even hinting that the U.S. government's word is no longer its bond, deserves a post all of its own. As does the question of why the U.S. is the only country in the world silly enough to think that the amount of debt the government holds is an independent variable from the tax-and-spend budgetary decisions that Congress makes. If, for example, you are willing to vote for tax cuts that aren't matched by spending cuts then you are, by default, endorsing a debt ceiling hike. But we'll get to those questions in the days and weeks ahead. For now, as we wait with bated breath for the new House to convene on Wednesday, a simple consideration of the political economy that is likely to define this battle will suffice.

Republicans are clear about their plans -- their bargaining position is that they want serious, dramatic spending cuts in return for raising the debt ceiling. Some people might think it is just flat-out gibbering insanity to use the threat of U.S. sovereign default as a poker chip in political negotiations, but here's the thing: We've never seen a crazier group of Republicans than the batch about to be sworn in Wednesday morning. Either they don't understand the potential consequences of their actions, or they don't care.

And of Obama, the one thing we know for sure about the man is that he is definitely not crazy. In fact, his sanity is likely to be his greatest liability in the upcoming test of wills. The last time the White House and Congress had a real showdown on the debt ceiling, Bill Clinton won his game of chicken with Newt Gingrich. But Obama's counterparts are even more conservative than the 1994 Contract With America crew, while he has yet to demonstrate a willingness or desire to play Clinton-style hardball.

This doesn't necessarily mean that the worst fears of the left will be realized, and that the Obama White House will agree to big cuts in, say, Social Security, in return for avoiding the possibility of default. The White House does have options if the Republicans get too greedy -- there are ways to avoid an immediate fiscal disaster that will give Obama some negotiating room. They're not particularly fiscally prudent -- for example, it's very difficult to justify raiding the Social Security trust fund to keep the rest of the government operating -- but there is a scenario in which the White House could gain breathing room to rally political support against an irresponsible opposition without running into the hard limit of a March default.

But what it does mean is that some kind of compromise is the likely end-game here, and almost by definition, that compromise is likely to include cuts to domestic spending programs that will act as a potent anti-stimulus on a fragile economy. There's a distressing paradox here. Obama's popularity was recently measured by Gallup as breaking above 50 percent -- an eight-month high -- and that is at least in part attributable to the recent resurgence of economic growth. But if his willingness to make a deal to keep the government running ends up punching the economy in the face, then in the long run he is likely to suffer drastically from his own sensible-ness.