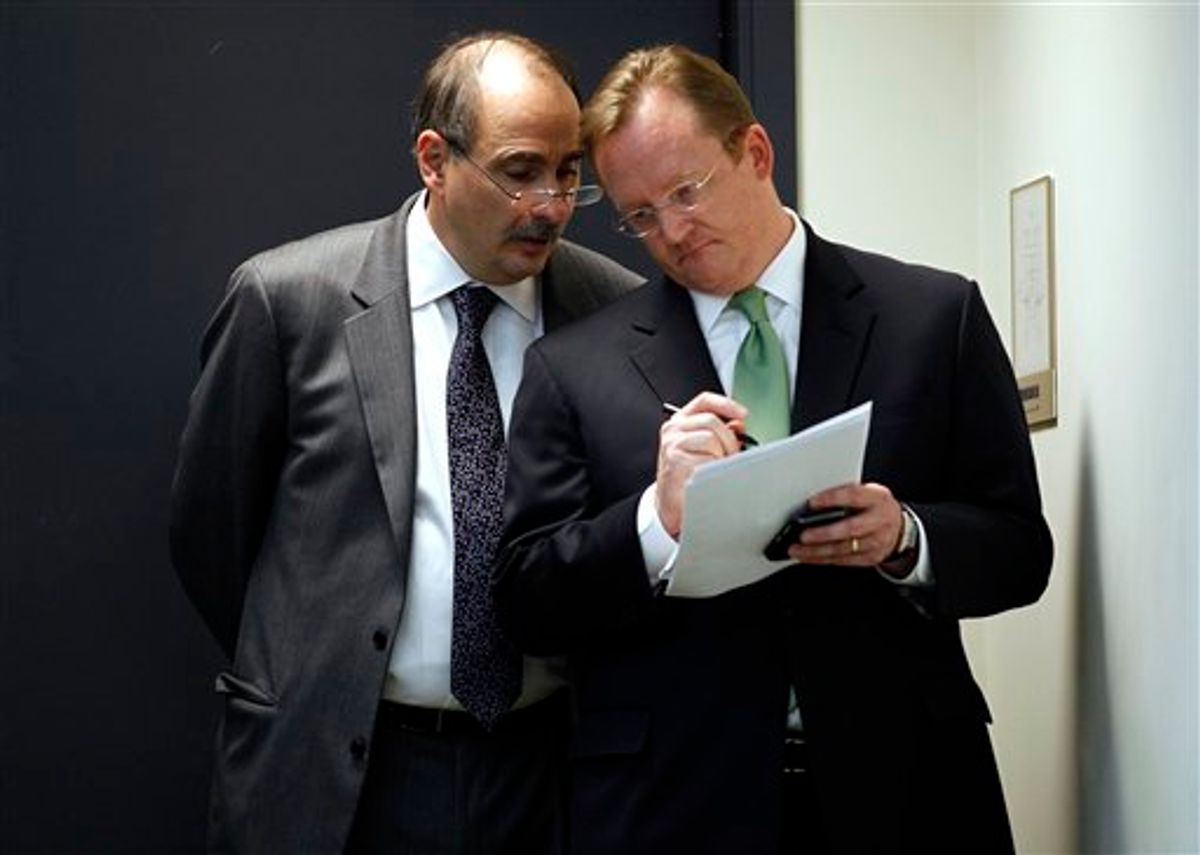 Robert Gibbs, the White House press secretary and one of the most visible and forceful advocates for President Barack Obama, said Wednesday he is quitting his job to become an outside political adviser. The change is among the many expected in the coming days as Obama redefines his leadership team to gear up for a re-election bid and a more powerful Republican Party.

Gibbs said he would be leaving the White House by early February. The top contenders to replace him are two of his deputies, Bill Burton and Josh Earnest, and Jay Carney, who is communications director to Vice President Joe Biden.

The move allows Gibbs to escape the grinding pace of the press secretary's job, make money giving speeches and spend more time with his wife, Mary Catherine, and their 7-year-old son, Ethan. From the outside, he will still be a key voice in Obama's decision-making, and he will end up back in a pivotal role in Obama's campaign for a second term.

The move will also change the dynamic of the White House, particularly combined with the coming departure of senior adviser David Axelrod, who, like Gibbs, has been at Obama's side for his entire presidential run. Obama is losing daily proximity to two of the aides who best know the way he thinks and who remember personally all the pledges of the campaign.

To the world outside of Washington's insular political scene, Gibbs is the rare White House staff member who is considered a familiar face. His sparring with reporters during his press briefings have filled hours of television the last two years.

Gibbs, 39, expressed huge gratitude for getting to serve in the White House. "Over the course of the next two years, we're going to be involved in discussions about which direction to take this country, and in 2012, we'll have a presidential election," he said. "I don't have any fears that there won't be plenty of roles (for himself) outside of the White House."

Obama is also weighing a change at the top staff job at the White House and perhaps in all of politics: his chief of staff. The interim holder of that job, Pete Rouse, may leave soon, and the president is considering bringing in William Daley, the banking executive and former Commerce secretary under President Bill Clinton.

In the coming days and weeks, Obama is expected to have a new chief economic adviser, a new senior political counselor, and two new deputy chiefs of staff. Collectively, the moves reflect that change is coming to the White House in ways that will alter the dynamic of the place -- and, in turn, will influence the agenda affecting the nation.

For all the insider intrigue that surrounds who is coming and going, the overlooked element is why.

One core factor shaping Obama's thinking is the new dynamic in Washington. Republicans have won control of the House and eroded the Democratic majority in the Senate, which fundamentally changes the White House agenda.

Obama's chief of staff must reorient his legislative and legal departments to deal with a Republican-led House. The White House will be on the defensive much more than the offensive, trying to protect and enforce the huge health care and Wall Street reform laws of the last year, and getting more organized to deal with aggressive Republican oversight.

Another issue at play is fatigue. People like Axelrod and Gibbs who have been with Obama from the start are ready for a break. So are others in a White House that has kept a crushing schedule. Some senior staff members are eager for fewer hours, more family time and a bigger private-sector salary. Staff members are being asked to either leave shortly or stay for the remaining two years of the term.

Soon to join the White House staff is David Plouffe, the architect of Obama's presidential campaign, who will essentially replace Axelrod as the top political adviser. Gibbs, in turn, will work out of the private office near the White House that has been used by Plouffe, who has written a book and counseled Obama since the end of the 2008 election.

Gibbs said he and Obama have been discussing the spokesman's departure for a while. "I'm going to continue to help him," Gibbs said, "so he's happy with that."

How Obama is rebooting his operation is the broader story, and the aides guiding him are a central part of it.

The White House goal is to become more efficient and less insular, to realign itself for divided government, to find fresh voices and to get Obama re-elected. A major emphasis will be to ensure that the campaign works in tandem with the White House, with Obama loyalists spread across the parallel operations or helping from outside both of them.

Among the expected changes:

--Daley is under serious consideration to replace Rouse as chief of staff, which is considered the most important gatekeeping job in American politics. Rouse, a camera-shy adviser to Obama who has served smoothly as interim chief of staff, had never wanted to do it for long. If Rouse decides to leave, Daley will likely come aboard. No other scenarios are being strongly considered. Obama and Rouse are expected to decide shortly.

--Gene Sperling, a Treasury official and deficit hawk with ties to Wall Street and the Clinton administration, is considered most likely to become Obama's chief economic adviser. That announcement could come as soon as Friday. Sperling would replace Lawrence Summers as director of the National Economic Council. The job becomes even more important considering that no task is more vital to Obama, both for the country's well-being and his own political fortunes, than boosting job growth in a time of high unemployment.

--Jim Messina, the deputy chief of staff who juggles operations, politics and legislative roles, is expected to leave to run Obama's re-election bid out of Chicago. He will likely be replaced by Alyssa Mastromonaco, whose portfolio would center on overseeing the operational aspects of the White House, including staffing and budgeting. Mona Sutphen, Obama's deputy chief of staff for policy, is also expected to leave her post.

--Axelrod, one of Obama's most trusted advisers and strategists, is leaving the White House after the State of the Union speech in January. He plans to recharge at home in Chicago and play a significant role in Obama's re-election bid.