At last, (some of) the Constitution is read

Democrats and Republicans in the House join together to read an abridged version. 3/5 clause? What 3/5 clause? 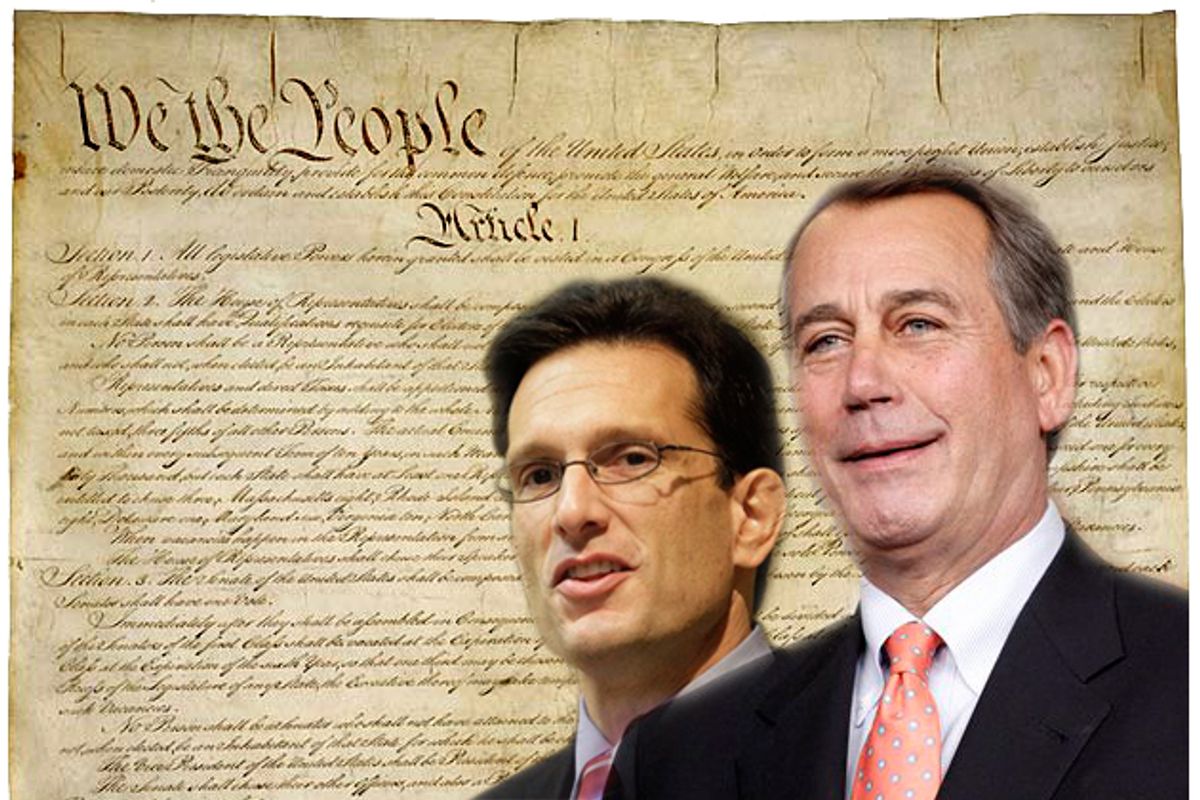 The Historic Incantation of the Constitution was delayed for about a half-hour, as various Democrats attempted to get the Republicans to actually read the whole Constitution, which, in the original text, has some iffy stuff about the enslavement and subjugation of various peoples. Republicans said they'd read the whole text "as amended," which means they're leaving out the stuff that amendments later changed.

If we're whitewashing the shameful bits out of our founding document, we're not getting a very good picture of history. Democrats obviously wanted to embarrass Republicans by getting them to read the three-fifths compromise, but it still would've been a healthy corrective to Founder-worship. The Constitution is a series of instructions for organizing a federal government that could represent wildly different constituencies. (And it only managed to keep the peace for a couple of decades.) It wasn't divinely inspired -- though there were vast quantities of ale involved in its drafting -- it was written by flawed men.

But the point of this stunt isn't actually public education.

Speaker John Boehner got the sexy preamble (which means he says "promote the general welfare"), which he got through without crying. The Constitution very quickly goes downhill after that, as it's full of boring, technical talk about how a federal government should be organized and run. Pelosi got Article I, Section 2. Eric Cantor read Section 2, just in case some Democrat tried to sneak in the three-fifths compromise language. After that, it was first-come, first-served.

It seems more or less pointless to read the skeletal remains of the sections concerning the election of senators and presidents, if we're not going to read the original text as written, but

(The fact that Democrats joined in on the readings both legitimized the silly exercise and also denied the opportunity of watching a Republican read the "general Welfare" bit in Section 8. Psycho Tea Partyer Allen West actually read the "necessary and proper" clause, though, which almost makes up for it.)

Article II got off to a slow start, but picked up when a birther in the gallery began screaming something about Barack Obama when the bit about the president being a "natural born Citizen" was read. A low point: They actually read the entirety of Article VII, with the whole paragraph about "the word 'the'" and all that nonsense. Then various members read the names of the signers.

Civil rights hero John Lewis ended up reading the 13th Amendment, which outlawed slavery. Now that they're done, maybe they'll start in on the entire United States Code, and then they can keep up these symbolic gestures until freedom is restored and the deficit is gone.

Watch the video of the birther disruption below: