"The Cape": Why can't TV do superheroes?

"The Cape," NBC's latest attempt to bring the popular genre to the small screen, fails in nearly every respect 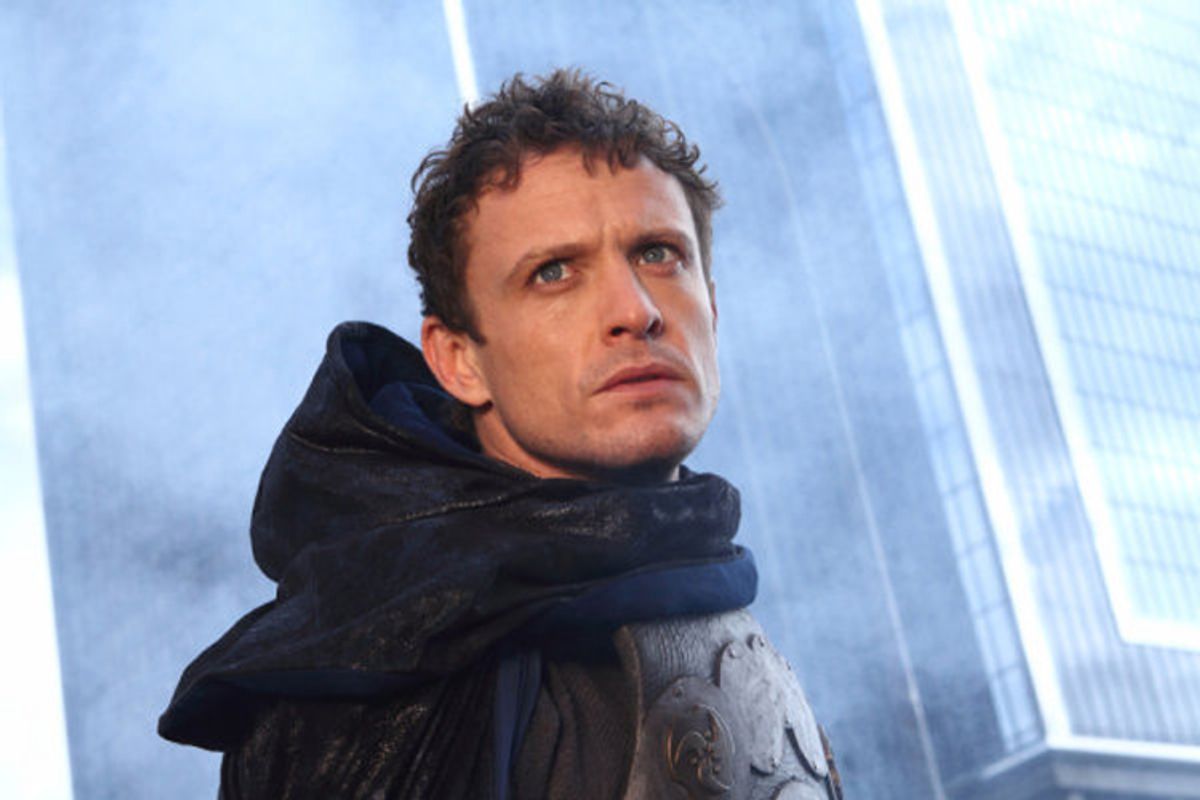 There's something fundamentally unsatisfying about "The Cape," NBC's new superhero show about a former cop who becomes a costumed crime fighter in the mythical Palm City (Premiering Sunday, Jan. 9 at 9/8 Central; regular timeslot Mondays at 9/8 Central). The problem isn't lack of ambition. The series wants nothing less than to be the ultimate tribute to comic books -- an encyclopedia of modes that will satisfy everyone from young viewers weaned on graphic novels to grandparents that still pine for the days of black-and-white Saturday morning serials. No, the source of the show's downfall is more basic: It rushes through everything, pulverizing potentially engaging characters and story until the whole production starts to feel like a long trailer for itself.

Created by Tom Wheeler, who produced the 2005 swords-and-sandals historical drama "Empire," "The Cape" invokes every stage of the medium's evolution, from the black-and-white morality and uncomplicated derring-do of the 1930s through the innovations of the 1980s and beyond (moral relativism; nasty violence; dense, long-form narratives).  The hero, Vince Faraday -- played by David Lyons of "ER" and "Eat, Pray, Love" -- is a Dudley Do-Right type, while the chief bad guy, Peter Fleming (James Frain of "True Blood"), is a sadistic bastard who moonlights as a frighteningly masked villain called Chess and fronts a military/industrial company that's like a cross between Halliburton and the OCP Corporation in the "Robocop" series. (Fleming's minions take over the decaying Palm City police force, à la OCP in the first "Robocop" movie; there are references to the company training local police in Afghanistan and developing a 21st-century version of napalm.)  This is the kind of series in which the hero, after being framed for assassinating Palm City's chief of police, recuperates at an old-fashioned circus where a master of illusion (the great Keith David) helps Vince design a dashing, caped persona (What? Didn't anybody heed the warnings of "The Incredibles"?) and teaches him how to disappear, and a super-badass little person (Martin Klebbo) sharpens his hand-to-hand combat skills. Meanwhile, a mysterious, faceless muckraking blogger known only as Orwell (Summer Glau) brings harsh truth to the public and offers instant exposition where necessary. (Judging from the stylishness of her explanatory videos, she must have been an apprentice editor for Michael Moore.)

Clearly you don't nitpick a show like this on grounds of plausibility or give it points for neatness. You decide if it's working for you, then either hop on board and see where it goes or bail out early. After viewing the two-hour pilot and its follow-up, I'm going with Option No. 2. This is only partly because I'm bored with the superhero genre as strip-mined by Hollywood movies. It's conceivable that a network series might come along and resuscitate the form for TV (although "Heroes" tried that and failed, mainly because it got tangled up in its own elaborate mythology, fell down and never quite got back up). But this hypothetical show would need to take advantage of the single greatest strength (or indulgence) of TV: its ability to linger, and make lingering interesting -- to make it the whole point of the medium, the thing that makes it distinct from movies.

"The Cape" doesn't linger; in fact it doesn't sit still for a second, even when it would be in its best interest to do so. The actors are appealing -- especially Keith David, who might have the most infectious grin of any actor anywhere -- and the show seems to truly believe in its own irony-free brand of corn. The veneer of gritty darkness is a fake-out. Deep down this series is as square as the original TV version of "Superman" with George Reeves, and that in itself makes it a breath of fresh air and therefore not unwelcome. (Who needs more "Dark Knight" wannabes?) Unfortunately, the characters are conveyed in dumb generic shorthand and have so few idiosyncrasies that the writing staff might as well have dispensed with names altogether. They're like stand-ins for characters to be created later. The hero is a Wonderful Guy who loves his Beautiful Wife and Loyal Son; the Bad Guy is a glad-handing swine with a Hulking, Horribly Disfigured Henchman (former footballer turned crime thriller star Vinnie Jones); and so forth. And one can't even savor the plot mechanics (the only consistent source of pleasure in series with black-and-white moral codes) because we never get to see the beginning or end of anything, only the high point, the Trailer Moment. And in the action scenes the cutting is so fast and the framing so unimaginative (either dishwater-dull, just-get-the-damned-shot coverage, or the Dutch tilts that have signified "Comic Book" ever since the Adam West "Batman") that we can't even savor the tactical ruthlessness of the bad guys or admire the resourcefulness of the hero and his pals.

For instance, no sooner has Vince been captured by the villain and fitted with the Chess mask (by way of making him the patsy for the police chief's murder) than the sequence abruptly cuts to Vince racing through a train yard with cops in riot gear on his tail. (They might be actual cops or might be working for the villain; the sequence is so haphazardly assembled it's hard to know for sure.) How could we not be allowed to see the dawning realization on the hero's face as he begins to understand exactly why and how he's been set up, and how the bad guy plans to kill him off? What misguided variation of the "Keep it moving!" mantra would deny us close-ups of the hero navigating those train yards and taking full measure of his predicament and thinking his way out of it, each new improvisation signaled by clever point-of-view shots and reaction shots? (Remember how that great reaction shot at the beginning of "Raiders of the Lost Ark" -- a terrified Indiana Jones staring up at that huge boulder -- bonded us to Indy?)

Worse still, after Vince hooks up with the circus gang -- basically a band of jolly pirates, minus the ship -- and they agree to assist him in exchange for Vince helping them rob some banks, we don't get to see Vince grappling even briefly with the implications of a former cop suddenly becoming a bank robber. (I guess Vince's shruggy, "I didn't know what else to do!" looks are supposed to suffice?) And the sequence perversely denies us of one of the great pleasures of any heist plot -- the chance to let us watch the gang prepare for the heist while showing off their odd talents and colorful personalities. It's as if the entire series had been designed to flatter the attention span of the typical TV network executive, a busy, busy man who doesn't have time to watch TV, or even hear about it, and hastens every story conference along with a gruff, "Awright, aright, I got it ... And then what happens? Let's skip ahead, I got another meeting at 3:30!" "Doesn't anybody appreciate showmanship around here?" grouses Malini, inadvertently diagnosing the root of the problem. Plenty of people appreciate showmanship; they just won't get it from "The Cape."