Jeb Bush and what the GOP really thinks about 2012

They'll never say it publicly, but are Republicans privately putting their bets on Obama? 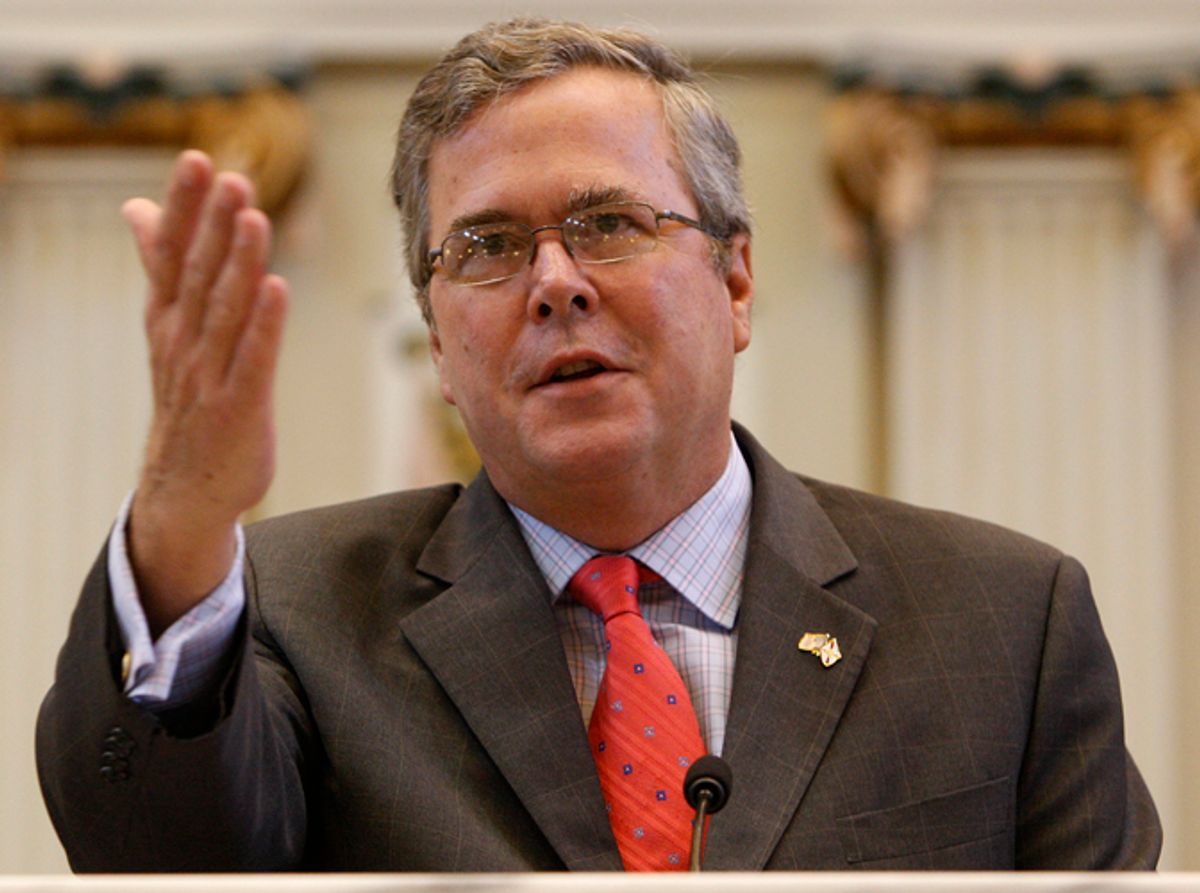 The unusually productive lame duck session of Congress that wrapped up just before Christmas, I wrote at the time, symbolized how much our political culture has learned from 1994, when Democrats were hit with a midterm drubbing almost identical to the one they suffered this past fall.

That '94 debacle, at least initially, terrified Bill Clinton and his fellow Democrats into a state of paralysis. Sixteen years later, though, Barack Obama simply acknowledged the "shellacking," went back to work, and soon found himself signing the repeal of "don't ask, don't tell" and extracting an unexpected $300 billion in stimulus through a compromise with Republicans. No one was seriously questioning his relevance as president, and even conservatives were willing to concede that his odds of winning reelection in 2012 were still pretty good, despite the massive midterm losses.

The difference, of course, is that everyone in politics today is familiar with the story of Clinton's fairly rapid post-'94 recovery. They know better than to write off Obama, who actually scores slightly better in polling now than Clinton did at this same point in his presidency.

I bring this all up because it's the first thing I thought about earlier this week when news broke that Jeb Bush isn't ruling out running for president ... in 2016. Of course, there won't be a Republican nomination for Bush to pursue in '16 if a Republican unseats Obama in '12, but what was striking about his comments and the reaction they generated is that no one seemed too hung up on this point. The contrast to late '94 and early '95 is striking. Back then, if a major Republican ruled out running for the presidency in 1996, no one was interested in speculating on whether that Republican might simply be waiting to run in 2000. Clinton, everyone knew, was a dead man walking. If you were a major Republican and you aspired to the presidency, you would have to run in 1996; to sit the race out would be to give up on the White House for good.

One way of interpreting Bush's statement, then, is that he -- like many Republicans, especially if you talk to them privately -- understands that Obama (for now, at least) is more likely than not to win a second term in 2012. So if Bush, who is 57 now, really does want to be president, it's probably a smart gamble to wait. The urgency that he would have been feeling back in late 1994 and 1995 -- if you don't run now, you'll regret it forever! -- is missing.

To be fair, there are other reasons Bush might be ruling out a '12 run; maybe he just wants more distance from his brother's tenure, or maybe he really isn't that interested in being president. And even if Bush and other Republicans do privately believe that Obama is a good bet for '12, a lot can change between now and then. Bill Clinton, don't forget, probably wouldn't have become president if every Democratic heavyweight hadn't concluded in 1991 that George H.W. Bush would be unbeatable in 1992.

But Bush is also not the only Republican making noise about '16; Chris Christie and his camp are sending the same message. Like Bush, Christie may have other reasons to wait; he was just sworn in as governor a year ago (a job he spent nearly a decade positioning himself for), and he knows that he probably can't return from a losing national campaign in '12 and win a second term in Trenton in 2013. But if more ambitious Republicans start sending the same signals -- especially given how wide open the '12 GOP field seems -- it will be strong evidence that deep inside, Republicans are sensing that 2012 will be an Obama year.