"What really bothers me is the hypocrisy of the man," says a victim of a 1990 London bombing 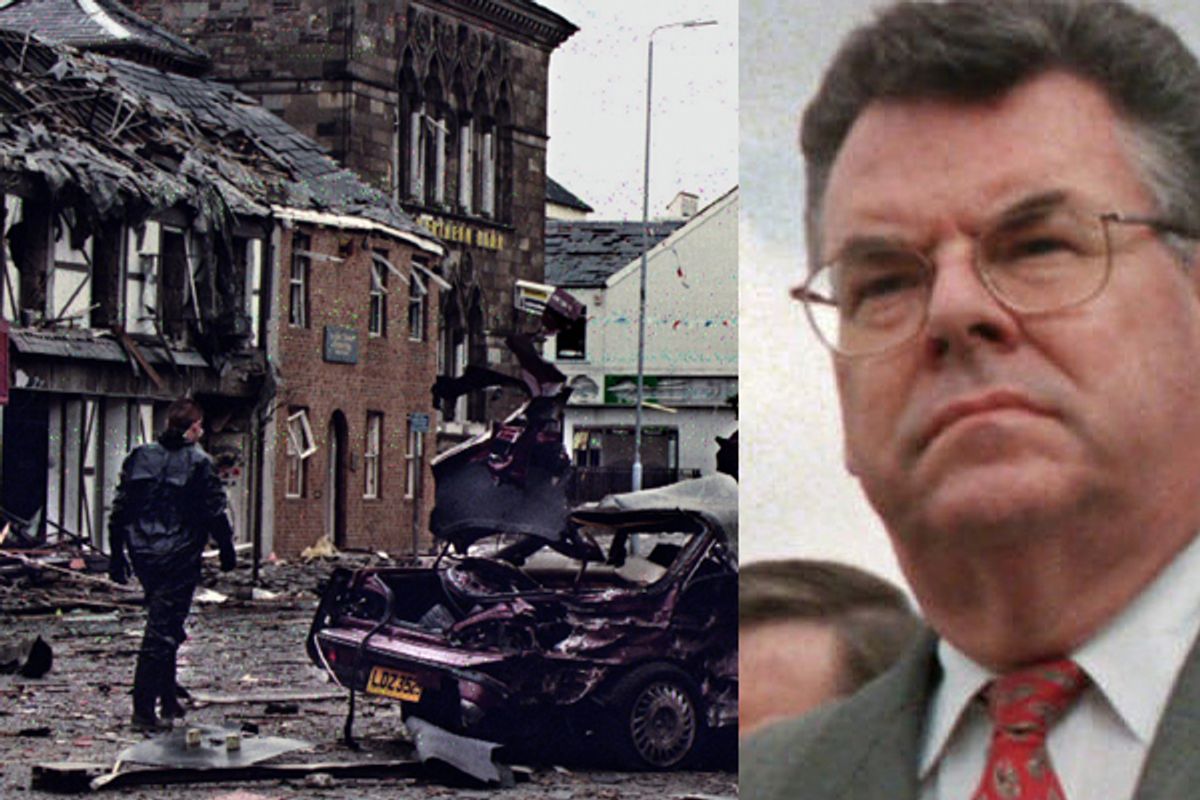 A police investigator walks past the wreckage of a 1993 IRA bombing that injured 14 civilians and five policemen. Right: Rep. Peter King on Capitol Hill Sept. 14, 1999.
--

Now that Rep. Peter King, R-N.Y., has assumed the chairmanship of the House Homeland Security committee and is promoting hearings on Muslim "radicalization," there's been a burst of media coverage surrounding his decades-long support for the IRA, the Irish terrorist group, which he broke with only recently, in 2005.

But for Tom Parker, an official at Amnesty International in Washington who hails from Britain, the distaste for King is personal. As Parker notes in a new Op-Ed, and explained further in an interview with Salon Thursday, he survived an IRA terrorist bombing in 1990 when he was 21.

"I have no problem with his support for a unified Ireland. What really bothers me is the hypocrisy of the man," says Parker, who is now policy director for terrorism, counterterrorism and human rights at Amnesty International USA.

It was King's designation of WikiLeaks founder Julian Assange as a terrorist that prompted Parker to go public. Parker himself is critical of Assange, "but to call him a terrorist when you have supported people who actually blow stuff up, it seemed to me that that was really beyond the pale," he says. "This is a guy who is happy to bully other people when he has a whole crowd of skeletons in his closet on this issue."

The 1990 bombing occurred when Parker was at the 21st birthday of a friend at the hall of the Honourable Artillery Company in London, a space frequently rented out for social events.

Members of the IRA put a bomb on the roof that exploded during the party, injuring 17 civilian partygoers, including Parker, who still has a few scars from the incident. As the Guardian reported at the time, in a piece headlined "Injured students become latest in catalogue of innocents caught in Irish campaign of shootings and explosions; Celebration ends amid blood and glass" (via Nexis):

For the 40 guests at the black-tie birthday party in the City of London headquarters of the Honourable Artillery Company it had been a relaxed evening.

After Pimm's and orange juice, there had been a five-course dinner, and at about 11pm the guests moved to the bar for a last drink.

A few minutes later there was a massive explosion with a blinding flash of light. Glass flew through the air, rubble rained down on the party-goers, and evening clothes were stained with blood.

Two good chronicles of King's involvement with the IRA -- including fundraising for them in the 1980s in New York -- can be read here and here.

Parker, meanwhile, lays out this standard for assessing terrorism in his Op-Ed:

That problem is simple: if your test for whether or not terrorist violence is acceptable is whether or not you agree with the cause that it furthers, you will never have the moral authority to condemn such acts when they are carried out by others. The use of violence against innocents must be wrong in whatever form it takes. Take any other position and you are open, as Congressman King undoubtedly is, to charges of hypocrisy.