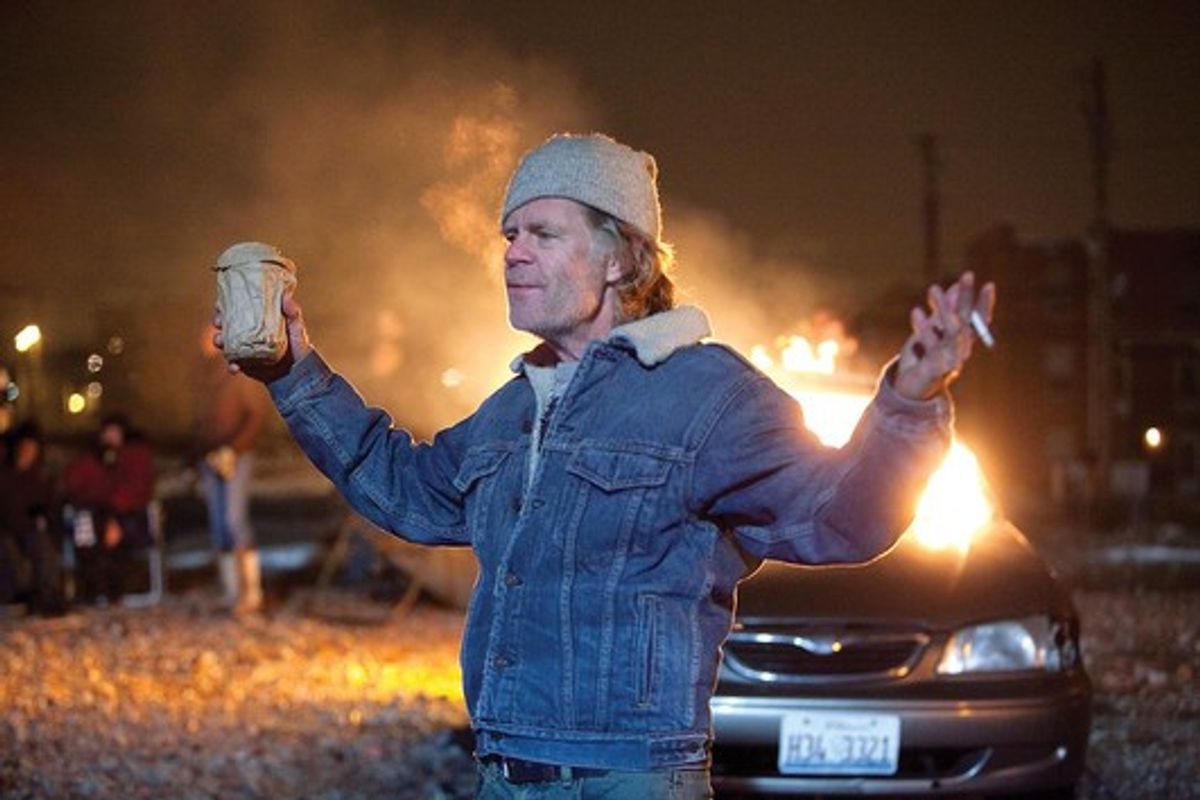 New Yorker critic Anthony Lane memorably described Ralph Fiennes in "Quiz Show" as having a literally mid-Atlantic accent -- as if the Suffolk-born actor had tried to devise a convincing speaking voice for his first American star part, only to have it get stuck somewhere between Olde and New England. Showtime's remake of the Channel 4 series "Shameless" is a whole show with a mid-Atlantic accent. Amazingly, this isn't a deal-breaker.

Co-executive-produced by original series creator Paul Abbott and former "ER" boss John Wells, and relocated from a Manchester public housing estate to a weathered Chicago neighborhood, Showtime's "Shameless" (Sundays, 10 p.m./9 Central) doesn't quite work as a rude but accurate portrait of a specific American social class, one of the main selling points of the original Channel 4 show. Its focus on Irish-American inner-city dwellers (and a couple of their non-white friends) feels faintly nostalgic -- less like a tough, funny look at plausibly real people than a bawdy 21st-century TV Chicago version of "A Tree Grows in Brooklyn."  (This series, "The Town," "Winter's Bone" and "The Fighter" are all part of a mini-resurgence of sensitive white working-class drama.) William H. Macy stars as Frank Gallagher, the family's long-haired, bar-crawling, pants-pissing drunk of a dad. Emmy Rossum plays Frank's eldest daughter, Fiona, who likes to cut loose in nightclubs and hook up with strange men when she's not taking care of her younger siblings. She has two teenage brothers: the talented-and-gifted horndog Lip (Jeremy Allen White), who works as a tutor; and the tough-but-sensitive Ian (Cameron Monaghan), who gets outed in the pilot when Lip finds his stash of man-on-man porn. There are more Gallagher kids; the kids have friends, the adults have friends, too, and their friends have friends, and everyone has issues.

When the characters are out on the Chicago streets, stumbling down snowy avenues and riding elevated trains, the on-location visuals sell the conceit that you're watching plausibly real characters that just happen to be kooky, exciting and profanely witty even though they're mostly played by slim, well-groomed, TV-shiny performers. The most credible cast members are Macy and Joan Cusack, who plays Sheila Jackson, the family's agoraphobic neighbor and the mother of Karen (Laura Slade Wiggins), a charming but loose girl who gives under-the-table blow jobs to two of the Gallagher boys. (Lip gets his first hummer during a math tutoring session, then brings Ian over a couple of days later as part of a de-homo-fication scheme; when Ian asks Karen if she felt any response, she asks him if he's ever tried to play pool with a piece of rope.)  Macy and Cusack are charismatic character actors (and Chicago natives), and unlike most of the younger performers, they're attractive but not airbrushed-pretty. They look as though they could fix a flat tire in the rain without losing their composure; they're real-world people, not TV people. But whenever the show goes indoors, suddenly you're smack-dab in the land of the TV people, watching blocked-and-costumed actors wander around a set that feels like a set. Despite the hand-held camerawork and the production design's run-down-and-cluttered signifiers, the interiors all look a tad "lit" and feel soundstagey. (All the walls look freshly painted, then freshly distressed.) If a kid from "Modern Family" peeked around the kitchen doorway, he wouldn't seem totally out of place. Nearly all interior scenes on TV feel like a climate-controlled Southern California simulation of life -- a narrative taking place somewhere in the United States of Television.

And on top of all that, "Shameless" seems (based on the first three episodes screened for critics) to be an almost scene-for-scene remake of the Channel 4 show -- the under-the-table double-header; Fiona's meet-cute with the dashing Steve (Justin Chatwin), who tries and fails to catch a guy who stole her purse and ends up hanging with her all night and buying her a new washing machine the next day. The show's fidelity to its source is no big shock. Abbott was intimately involved in the American remake, which was originally supposed to air on HBO, and neither he nor Wells is inclined to fix what isn't broken. But the scene-for-scene approach does close off any chance of revising the concept to make it feel unmistakably American. And it leads to translation problems -- that mid-Atlantic thing I mentioned up top.

How, viewers might ask, could an overpopulated single-parent family headed by an unemployed drunk afford a house big enough to comfortably accommodate them all? In the original series, the answer was government housing assistance, a dole check for dad, and various part-time jobs and petty criminal schemes for the older kids. The Showtime series shows us the jobs and scams -- and in a future episode the landlord mentions Frank not paying any rent, without making it clear if this is some kind of arrangement between them or just a matter of Frank being behind. In any event, the show conspicuously avoids any mention of government help -- welfare, food stamps, Social Security payouts, anything. Why? Maybe it's because Abbott and Wells couldn't devise a suitable U.S. equivalent for the English/Irish/Scots fiction tradition of the alkie father who drinks away the dole money. Or maybe it's due to a knee-jerk belief on the part of American film and TV producers that any character on public assistance will be seen as unsympathetic, perhaps innately worthless. So the show has Frank collecting disability from an injury that healed a while ago and being followed by a private investigator trying to prove his fraud -- an amusing contrivance that nonetheless lacks the necessary bite. (Macy, while compelling and funny, is less in-your-face gonzo self-destructive than the show's U.K. star, David Threlfall; at times he comes off like a former college professor gone to seed or a Charles Bukowski-style poet-souse. Is the character slightly softened by the program itself, by Macy, or by our own ingrained affection for this veteran actor?)

Now and then "Shameless" sloughs off its mostly self-imposed constraints and fires on all cylinders, observing economic hardship, drunken tomfoolery and sexual shenanigans with a keen eye for class specifics.  It's never better than when it's showing the collective organism of family sustaining itself. I especially love the second-episode musical montage showing the Gallagher kids and family friends scamming to make their monthly nut. With its raggedy camerawork, fast cutting and upbeat rock 'n' roll score, this sequence and others in "Shameless" (the original as well as the remake) suggest that 1996's "Trainspotting" was a pop culture touchstone whose stylistic impact is still being felt.

And there are moments of real pathos and grim wit: Frank getting a bloody nose in a bar fight in Episode 2 and then paying his humiliation forward by bloodying a son's nose at home; the youngest Gallagher daughter, Debbie (Emma Kenney), sneaking out of bed and putting a pillow under the head of her dad, who's passed out on the floor. The high jinks and banter are contrived -- they could be a bit arch and sitcommy on the original show, too -- but the sentiments and situations ring true more often than not.  At least "Shameless" doesn't reassure us that there's no class system in America, that genetics and culture have no effect on destiny, and that we can lift ourselves up by our own bootstraps any old time we want. It's about feeling a great weight on your shoulders every day but resolving to carry it around anyhow, drinking, screwing and cracking wise to take the edge off.