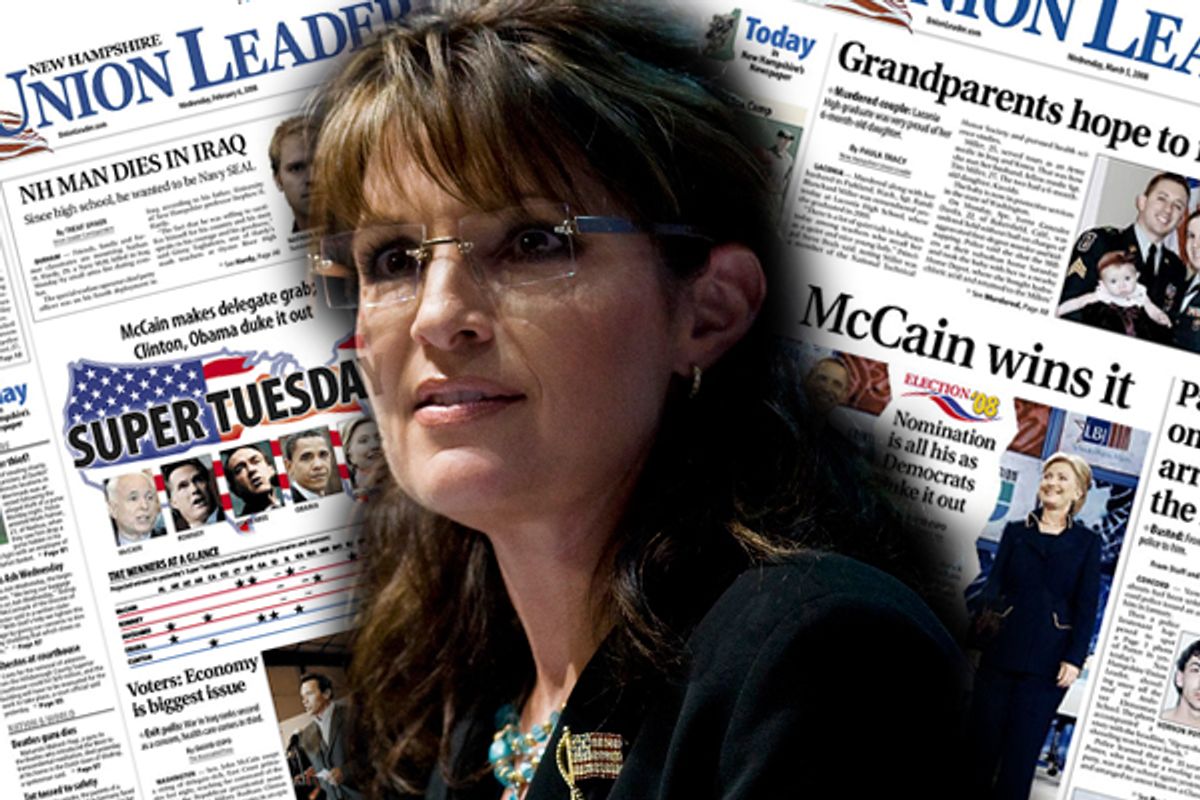 As the publisher of the Union Leader, the biggest newspaper in New Hampshire, and the most conservative, Joe McQuaid will play a crucial role in the 2012 Republican presidential primary.

I spoke with McQuaid last week about the history of the primary, how he sees the 2012 field shaping up, and how he approaches the endorsement process. In an era when the influence of newspaper editorial pages is on the decline, the Union Leader's endorsement remains coveted and influential. John McCain got a much-needed lift in 2008 from the Union Leader's endorsement, which helped him win the primary in a crowded GOP field.

"It gives you new life and conservative credibility," says Ovide Lamontagne, the Tea Party candidate for U.S. Senate who last year lost a tight primary to now-Sen. Kelly Ayotte. Lamontagne's candidacy was fueled in large part by the endorsement of the Union Leader. When Ayotte last summer received the endorsement of Sarah Palin, McQuaid ran a tough front-page editorial advising Granite Staters to pay this "outsider" no heed.

When I asked him about this, he said the editorial "was not meant to be detrimental to Palin" -- but simply to argue that an out-of-state endorsement shouldn't sway voters.

McQuaid also shed light on the paper's endorsement process. Rather than an editorial board, he and editorial page editor Drew Cline set the official opinion of the paper. The endorsements typically carry McQuaid's byline. They are made after candidates come by the newspaper's office for an interview. So far, says McQuaid, only former New Mexico Gov. Gary Johnson has visited (McQuaid thinks that he is running, but does not have much of a chance).

Here's a partial transcript of our conversation, edited for length and clarity:

Does it feel different this year than in 2008?

Well, I've been through enough of these things that I've been through cycles where it's only been on one side or another. It's different than 2008 because we had races on both sides that year. We had Obama versus Hillary and we had all the Republicans.

In 2004, Bush was the incumbent and there was no real challenger, so it was all on the Democratic side. There were plenty of candidates, and we talked to a bunch of them. Interestingly, Obama's people didn't come knocking on the door wanting to talk to us, which I thought was stupid of them because we are the statewide newspaper. No one has ever accused our news stories on these candidates of being slanted one way or the other. We let them have their say and ask them tough questions. Obama actually didn't win up here. So I think we're going to have quite a field of Republicans come through.

Are there particular things that you're looking at in the field right now?

Honestly, no. I'm sure it will come into focus as the months progress. We're going to be involved in one -- I hate to call them "debates," because they're not exactly Lincoln-Douglas set matches -- televised event where reporters question the candidates. We're on board with CNN and the local WMUR to do a televised presidential forum sometime in June.

All I can predict with any great confidence is that whatever we say it's going to be today, it won't be the case by the time the primary rolls around. And whatever that is may not be the case by the time the general election rolls around. Right now it's all about the economy -- it'll be something else. China will build another stealth jet, or somebody will take over the Pakistani government. Something will happen and the candidates better be quick on their feet.

On the topic of predictions, George Will recently said that Sarah Palin can't win a general election. Do you have a take on that ?

He's not alone in saying that. A number of conservative columnists have said they don't think Sarah Palin can win a general election. I'm not privy to that knowledge, that she can't win a general election. I've never met Sarah Palin. So if she gets into the race, which is the first hurdle, I hope she comes to New Hampshire and I hope to get to meet her. Then I could spout off like George -- he's a pretty bright guy, Mr. Will. We've had him up here as a speaker before; he may be right, he may be wrong, I don't know.

Do you think it's possible for Palin or anyone else to win the nomination without going to New Hampshire?

A) Anything is possible. I'll be drummed out of New Hampshire for saying that.

B) The modern primary started in 1952. As a matter of fact, Harry S. Truman, right after that primary, announced he wasn't running for a second term because [Estes] Kefauver beat him up here. Harry didn't come up, he said primaries were nothing.

But on the Republican side that year, the guy who went on to be president won the primary, Dwight David Eisenhower. He didn't set foot in New Hampshire, he wasn't in the country. He was in Paris, running Supreme Allied Command. He beat Robert Taft, who came to the state and awkwardly shook hands, held chickens and babies -- didn't know the difference between the two of them.

In 1964, the big primary in New Hampshire was between a guy named Barry Goldwater and Nelson Rockefeller -- east wing of the party and the conservative wing of the party duking it out. Look up who won that year, a guy that not only didn't campaign in New Hampshire and wasn't in the country, he wasn't even on the ticket. It was a write-in: Henry Cabot Lodge, who had been Tricky Dick's running mate in 1960 and was at that time serving as our ambassador in Vietnam. You should tell Sarah, she'll never come up here.

So your advice is that she should run a write-in campaign from out of state?

I have no advice for the woman at all, I have never met her, I would love to meet her. I think today it is less likely, rather than more likely, that you could win the Republican presidential nomination without going to New Hampshire. If she does get in the race, and doesn't come up here, then all the pundits are going to focus on that -- "What, are you scared? You can't win nationally if you can't come to New Hampshire and face the voters."

Iowa is a caucus, whatever the hell that is. It's a thing that depends on whether people are motivated to go to somebody's home and stand on one side of a line or another versus the treasured secret ballot of New Hampshire. What is it [John] Sununu used to say? "In Iowa they pick corn, in New Hampshire we pick candidates."

Haley Barbour -- has he been up at all? Have you met him?

He's been up, I haven't seen him. I think he's a real dark horse.

I don't think he's well-known. And he's a Southerner, which worked well for Carter and Kefauver, but it doesn't work that well for Republicans I can think of. He's a governor now, but he hasn't been a governor that long.

Going back to the 2008 vs. 2012 issue, do you think after the 2010 midterms and Obama as the incumbent, you're going to have a dynamic in the Republican primary that will produce a more conservative candidate than John McCain?

Probably. Republicans also have this habit of nominating the guy from the last election. They nominated McCain last time because they should have nominated him before, in 2000, and they didn't. Then last time they didn't nominate Romney, so a lot of them will say, OK, now it's Romney's turn.

It's a crap shoot, and I think Palin makes an interesting element in it if she gets in. The other guys will have to be careful what they say if she does get into it because they don't want to offend potential Tea Party people. It'll be a hell of a lot more interesting if she's in it than if she's not in it.

How do you approach the endorsement process? Is there a philosophy?

The philosophy is the man or woman who we think is the best leader for the country. There was a guy who my predecessor -- William Loeb, who ran the Union Leader for 40 years -- endorsed, named Ronald Reagan. And Loeb would say privately, and I think publicly, that Reagan wasn't the most able guy, but he was the guy who could inspire the country, and he was the guy who we needed at the moment because he actually believed what he was saying. And Loeb agreed with what he was saying.

It's tough to define, but I think as the campaign starts to gel and we meet these people, and hopefully ask them some questions that will knock them a little off guard, we'll see what they're made out of.