Is this the end of American economic dominance?

With top corporations expecting another year of record profits, economists offer a pessimistic vision of America 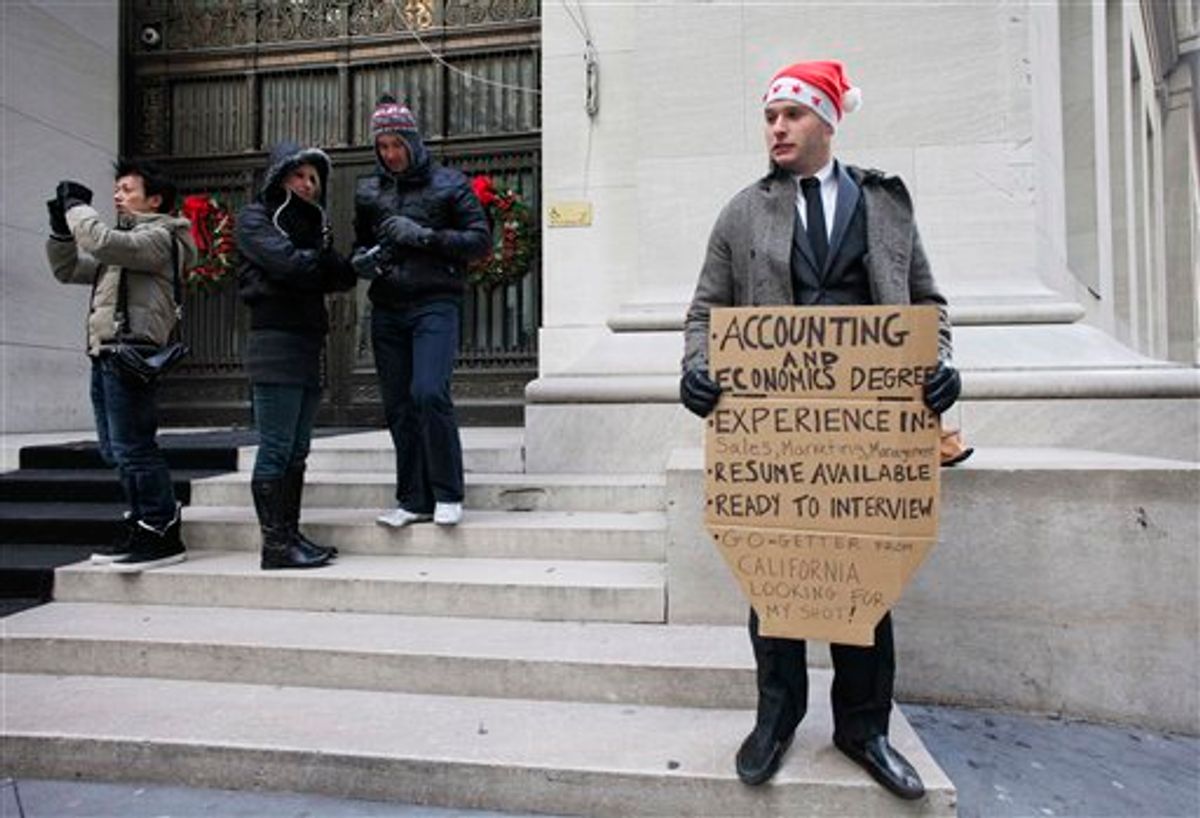 In this Dec. 15, 2010 photo, Jesse Paloger holds up a sign while standing on Wall Street as he hopes to find a job, in New York. Paloger, who has an accounting and economics degree from the University of California, Santa Barbara, has written on the bottom of his sign, "Go-getter from California looking for my shot!" Fewer people applied for unemployment benefits last week, the third drop in the past four weeks and a sign that the job market is slowly improving. (AP Photo/Mark Lennihan) (AP)
--

Things have been on the up and up lately for the American economy, right? Unemployment is falling -- slowly. Consumer spending (read: borrowing) is growing -- slowly. The White House is changing the economic advisory guard -- controversially.

So why are economists so persistantly pessimistic? Saying things like:

The age of American predominance is over. The (Chinese) Yuan will be the world's reserve currency within two decades.

That's a quote from MIT economist Simon Johnson. According to a Reuters wire from Sunday, the end of America is nigh, and based on the pundits' reactions to Obama's picks for new economic advisors, we're not well-positioned to deal with that prophecy.

President Barack Obama announced Friday that Berkeley economist Gene B. Sperling would replace Larry Summers as director of the National Economic Council. Sperling held the same post under Clinton in a sunnier political climate, but his Wall Street sympathies loom ominously on the horizon, according to some.

Says HuffPost's William Alden in a report published just before the Sperling announcement:

Sperling has never worked full-time in the financial sector. But that hasn't prevented him from earning paychecks on Wall Street.

Goldman Sachs paid Sperling $887,727 for his advice in 2008, according to Bloomberg News's analysis of financial disclosure forms.

Also just before Obama's announcement came this optimistic earnings report from Bloomberg News. The conclusion? Our nation's top corporations continue to make record-breaking profits, some say, without actually creating any jobs for Americans. Employment prospects in India and China couldn't be better, though.

So this brings us back to Johnson's dismal prediction. China is booming -- building skyscrapers, stealth jets, our new iPhones -- and everybody knows it, while America -- still super rich and prosperous and great and Detroit's dereliction is actually seeming pretty hip and stuff -- is stagnant.