Americans get it: It's just a horrible coincidence 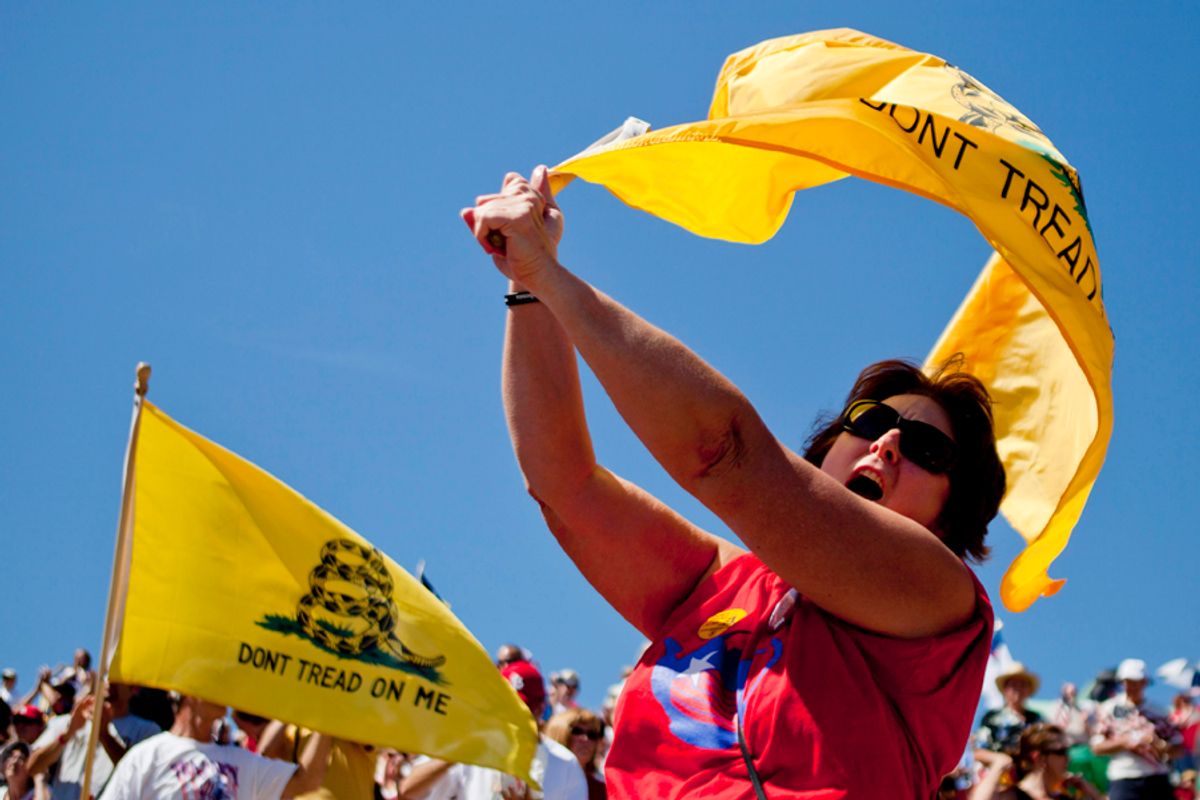 Mary Syron, of St. Louis, gathers with other Tea Party supports on the steps of the Gateway Arch during the "Gateway to November" rally hosted by the St. Louis Tea Party and Tea Party Patriots, Sunday, Sept. 12, 2010, in St. Louis. (AP Photo/Whitney Curtis) (Whitney Curtis)
--

CBS News is out with a new poll today that finds Americans strongly rejecting the notion that the political climate played a role in Saturday's attempted assassination of Rep. Gabrielle Giffords.

Fifty-seven percent of respondents say that the nation's "harsh political tone" didn't have anything to do with the shooting rampage, compared with 32 percent who say it did play a role. Not surprisingly, Republicans are more unified in denying any linkage (a 69 to 19 percent margin), but even a plurality of Democrats -- 49 percent -- agree that there was no connection. Among independents, the spread is 56 to 33.

This is somewhat heartening, given that so many commentators on the left -- including, I must say, some of my colleagues here -- have since Saturday been playing up the extreme rhetoric that Sarah Palin and other Tea Party favorites have spouted these past few years, claiming that it all somehow created a climate conducive to Jared Loughner's shooting rampage.

As I wrote on Sunday night, I find this to be a very slippery argument. We know that no connection between Loughner and Tea Party politics has been established, and what we have learned about him strongly suggests that he lacked a recognizable political identity. He looks to be a deranged young man and it's unclear if he was even aware of the political debate/conversation that the rest of us follow every day. There's just no evidence of any connection between Loughner and Palin, the Tea Party and conservative movement.

Thus, the "climate of violence" argument feels to me like a backdoor way for some on the left to attach blame to Palin and the Tea Party anyway. I might be more sympathetic to it if someone could explain how, precisely, it worked in this case: What specific evidence is there that the "climate" was relevant to Loughner's thinking? When was the moment that the tone set by Palin and the Tea Party kicked in and turned his obsession with grammar, literacy and "currency" into something lethal? Where's the evidence that he was even aware of the "climate" in the same way that those of us who watch cable news and read blogs all day are? All I've heard so far is evidence-free, non-quantifiable speculation.

Sure, it's easy to go back and pull together a  list of every recent pronouncement from Palin and other conservative leaders that involved some kind of reference to guns or revolution or violence. Juxtaposed with coverage of the Giffords tragedy, this certainly looks damning: The same congresswoman whose district Palin's website once framed in cross hairs has now been shot in the head! But there's absolutely no proof that this is anything more than a horrible coincidence. Political scientist Brendan Nyhan put it best on his blog yesterday:

People have been having a hard time holding two ideas in their head at the same time:

2. Contrary to his suggestion, there is no evidence that such rhetoric caused Saturday's events. Even if such evidence is later found, it would not justify the evidence-free claims that have been made in the last 48 hours.

If the CBS poll is accurate, most people aren't having trouble making this distinction -- even if plenty of commentators are.