My godmother is gone, but I have her book and my soup

When she passed, I inherited her cookbook. And when I make this soup, I wonder if she loved it as I do 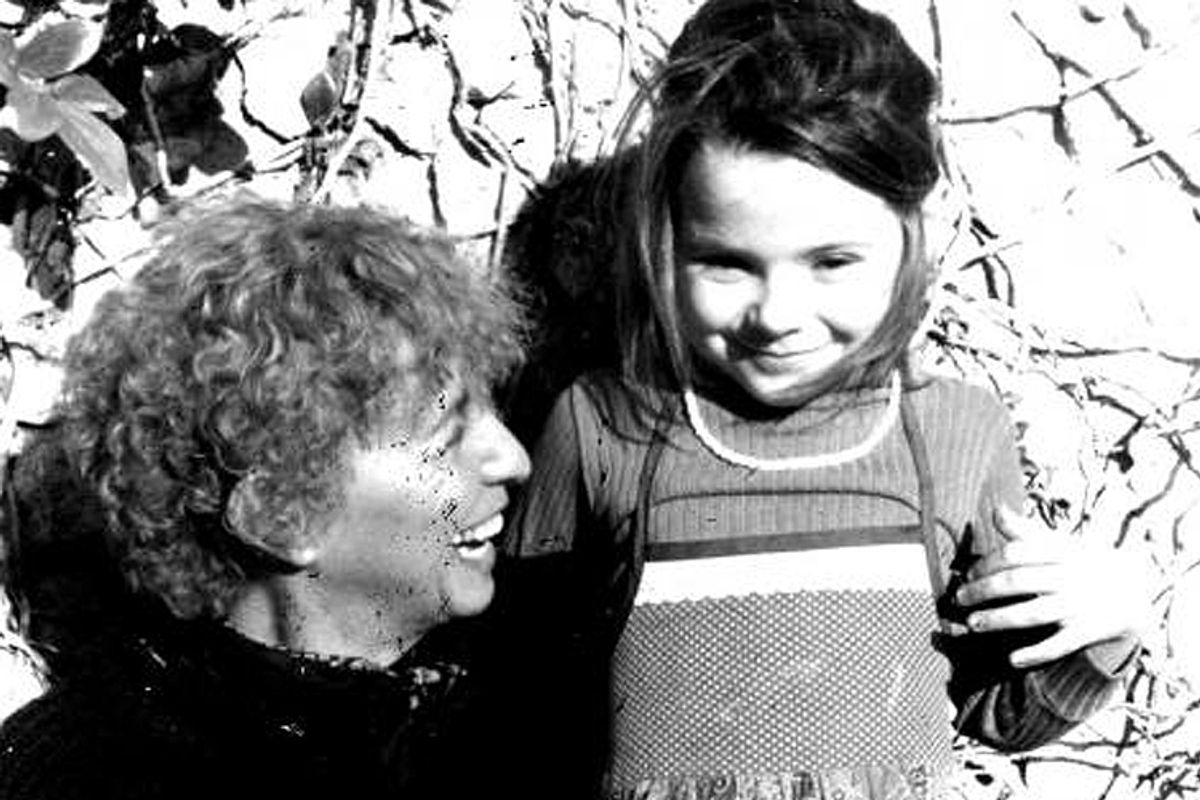 "Good God, what is that? It's huge ..." I said suspiciously, as my mother removed the book from one of her voluminous duffel bags. My mother doesn't like anything to go to waste, so she's always convincing me that I need this or that. She'd just brought me a mountain of stuff from Arizona, where she'd been playing hospice nurse for a close family friend. After the death she'd helped to clean and pack up the house, and during our visit she kept retrieving "one more thing" she'd scavenged for me. The pile on my coffee table was at the teetering point: beaded jewelry, small weavings, a photograph album, seven or eight obscure books, a ceramic rabbit, two oil paintings by the deceased, hand-painted floor tiles.

"I can't believe you dragged that all the way across country on the train," I said, hefting the book, which was thick as a cinder block. "Pellaprat's 'Great Book of French Cuisine' ... I've never eaten a French dish in my life. You know how I feel about the French." I said.

"It was Carol's," my mother said, sounding wounded.

Carol was my godmother, and she and my mother knew each other from the old days in San Miguel de Allende. They had a thing or two in common: They were both adventurers, bohemians, writers, recovering alcoholics who had a tendency toward bitterness, which, on a good day, could be superseded by their wonder at the infinite beauty of the world.

Carol was tiny, with feathery brown hair and eyes that seemed black, though of course they weren't. There was something of the shrew in her, though it wasn't an ugly shrewishness: rather, a delicate menace. She smoked hand-rolled cigarettes and obsessed about politics. An ardent supporter of Jerry Brown when he made a presidential bid in 1992, she liked to call Bill Clinton "the prince of sleaze."

In addition to writing, she wove and painted. One day when I was a kid she drove me out to her studio in Española, N.M. As soon as we got there, she rolled up the garage-style door to let March light permeate the narrow cement room. Through the doorway, dead golden grass stood still in an arroyo, and the sky above the mountains was deep blue. Inside was almost as vivid;  from the floor to the high ceilings, the walls were covered with paintings, mostly abstract -- huge canvases alive with loops of color.

Carol was not the sort of person who felt obligated to entertain children, even ones she was fond of, and I was not the sort of child who expected to be entertained. Briskly, she got to work. As she painted, reaching as high as she could with her brush, she'd pause to take swigs of buttermilk, straight from the carton. She said it helped to counteract the poison of the paint. I wandered around, staring at the paintings. True to character, my favorite was the least abstract -- a lush expanse that showed hidden treasures below the earth.

The last time I saw my godmother, she was standing in the parking lot of a strip mall in Arizona, looking tiny but somehow still debonair in her black pants and fuzzy red sweater, accessorized with a red silk head scarf and a portable oxygen tank. I was on my way to Mexico and in a hurry, so she'd driven from her home in Patagonia to meet me and my boyfriend Josh en route. It was a short visit: She treated us to lunch at a Chinese buffet (a generous gesture on her minuscule budget) and then we said goodbye in the parking lot. Looking back, I wish Josh and I had taken an extra night and driven out to Patagonia to see her studio, but we were young and, as I said, in a hurry. And it wasn't until we were saying goodbye in Arizona's bright winter wind that I knew this would be the last time. I was struck with startling certainty: one of those rare moments in life that are devoid of doubt. But the realization came too late for me to make anything of it: I was already climbing into Josh's truck and waving goodbye to the little figure on the tarmac, who stood there in the sunlight watching us until we drove away.

I am sentimental, so I couldn't just get rid of the cookbook. I shelved it grimly. More stuff to move from place to place. I hoped no one would see it and think I actually had pretensions of attempting French cuisine. It would be bad for my image. The tome remained unopened until the day two of my old standbys ("The Best of James Beard" and "Craig Clairborne's Favorites") failed me. With a sigh, I dragged Pellaprat off the shelf, set it heavily on the kitchen table, thumbed to "Foreign Specialties" within the immense soup section, where I found a recipe titled 'Minstrone alla Milanese,' which begins: "1/2 lb fat bacon, 1/2 lb lean bacon." Intriguing.

The soup was a great success, the smokiness of bacon balanced by the sweetness of carrots, onions and garden tomatoes. Turnips added complexity. Over time I made changes, as one does with a favorite recipe: one day I didn't have any grated cheese, so I substituted fresh mozzarella, with amazing results. I replaced "spaghetti or rice" with rotini or bow-tie pasta, tripled the garlic (as is my wont) and added mushrooms, fresh parsley or basil, diced zucchini, and leek greens. I also began cooking the soup the day before and then adding a second batch of ingredients on the second day, only a few minutes before serving. In short, the soup became part of my culinary repertoire, to the point that every time I called to invite my friends Becky and Tom over for dinner, I could always overhear Tom in the background asking, "Is she making the minestrone?"

But the key to this soup is really the turnip and the bacon, to which I owe Pellaprat all the credit. As it turns out, Pellaprat's "The Great Book of French Cuisine" is something of a classic. Originally published in 1935 as "L'Art Culinaire Moderne," the book is the summation of a life's work and contains practical advice on everything from planning a menu to fluting a mushroom, all written in a sensible voice reminiscent of Emily Post. My 1972 edition is 950 pages long, replete with retro color photographs, the gaudy variety that I absolutely adore.

For a culinary philistine such as myself, much of the information isn't exactly useful: For example, I don't really need to know the correct term for lining a pastry tin with pastry (foncer), and I am unlikely to try many of Pellaprat's recipes; I am not yet in the habit of following instructions such as "Arrange the aiguillettes of duck to cover the macedoine, and mask over with the aspic. Mix the foie gras and butter and fill into 6 small molds (duck shaped if possible)." But plenty of recipes still beckon to me, the chapters on general culinary techniques are excellent, and it's interesting to look through the well-traveled volume and wonder what Carol learned from it. Did she serve "our" minestrone recipe at candlelit literary dinner parties at her San Miguel house? Did she cook eggs à la Florentine for her former husband, the writer Pierre Delattre?

One of the reasons I love food: Recipes bring me close to the ones I have lost, and the ones I might lose in the future. I cherish my dad's recipe for chicken cacciatore, and regret not having my grandmother's recipe for marble cake. Minestrone alla Milanese reminds of the living: My godson Jack, 3 years old, crawling into my lap as his parents and other friends sit around the big table in our old dining room in Seattle, connected by years and circumstance, brought together by bacon mozzarella soup. And the minestrone also makes me thankful for Carol, and my mom, and the magic of books.

I've lost a lot of friends, and, other than my mother, my only living blood relatives anymore are cousins and second cousins. I don't feel especially sorry for myself, but I do have regrets. Because, as most of you know, each death brings with it a new regret. I should have been there, I should have listened, I should have answered that last call ... I wish I could have asked him this, I wish she'd had time to teach me that ... You can't answer that call or ask that last question, but sometimes you can still learn a thing or two from the things left behind.

In culinary tradition, minestrone is soup made with whatever you have around. This recipe can be made with almost any vegetable, and my versions vary according to season and budget. The following ingredient list is just a favorite variation. You can successfully make this soup with fewer ingredients. As mentioned, I like to cook the day before, reheat and then add the last batch of vegetables right before serving. But it's good on the first day too. I usually serve up the bowls individually, spooning the soup over the pasta and fresh mozzarella.