The model's son speaks out about the photo that's gripped the blogosphere. Why are people getting so worked up? 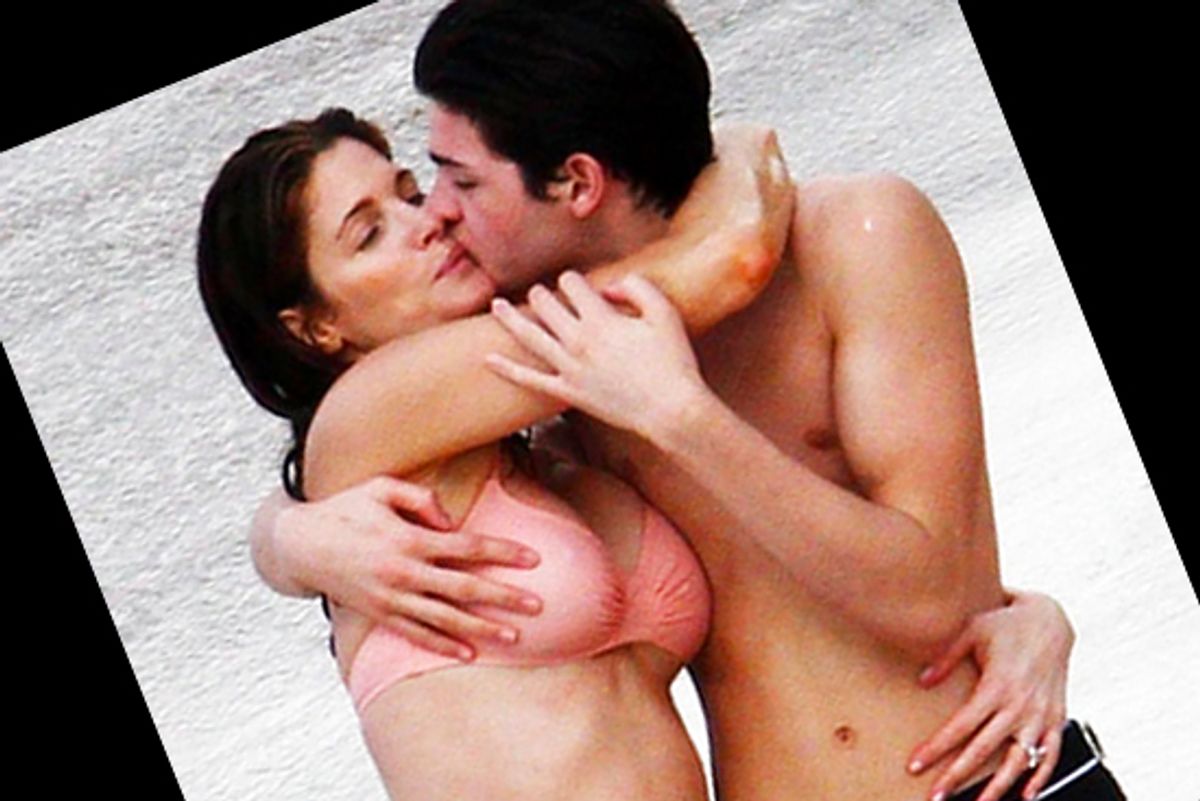 When you see paparazzi shots of a supermodel nuzzling on the beach with a young, handsome, impeccably torsoed young man, you probably don't think that there is some quality family bonding action.

So when photographs emerged last week of a bikini-clad Stephanie Seymour romping with and kissing her teenage son Peter Brant II, the notion of a legendarily hot woman engaging in innocent maternal affection simply did not compute. It certainly raised eyebrows that Brant, his arm around his mother, was casually touching her entire side boob area. And then he kissed her hand! And most damning of all, in one image, from a particular angle, it looked a little like (as giggitygreg.com referred to it) Seymour giving her son his "boner of the day."

A supermodel in a bikini kissing a hot guy is surefire tabloid fodder -- but a supermodel in a bikini kissing her son? That is pure, creepy gold. On Thursday, Gawker ran the "amorous images" under the question "Seriously, is this normal behavior? How close is too close between mother and son?" Stylist.com pubbed them as well, referring to Seymour as "canoodling"with her "touchy feely partner in crime." And PopEater  generously allowed that "perhaps it was purely innocent" before adding "there's still a certain 'Eww' factor."

In typical Internet fashion, battle lines were quickly and sharply drawn. "If the situation were reversed and it was a father kissing his 17-year-old daughter on the mouth with his hand on her breast, we'd all be calling CPS to get the girl away from him," wrote a poster on PopEater. "Who kisses his mom or even touches her when she is in a bathing suit? When he is in a bathing suit?" tut tutted another on New York. (I'd wager maybe it's because they're on the beach.) But as a Gawker poster asked, "Mother and son affectionately embrace (not every one has the American standard of personal space/eroticism, people) and we suggest/accuse them of incest?"

Does it matter that Seymour, who recently reconciled with estranged husband Peter Brant, was on vacation with her whole family at the time? Does it matter that the photos were clearly taken in rapid succession, from at least two different angles, suggesting that what might appear a languorous caress was instead a brief embrace? Does it matter, further, that Peter Jr. is openly gay?

Yesterday, the self-described "conceited and fabulous" young Brant hit back via Facebook, calling the "whole Beach kiss scandal … not only a malicious attack on my family's privacy but also on me personally." He added to Gawker today that "My mother and i are very close as she is with all her children. she often hugs and kisses me and my siblings in an manner that is intimate, any mother in the world does the same. … At my age my mother and I are almost like friends and I feel open to talk to her about anything (and yes our relationship may be different because of my sexuality.)"

Look, I don't know what was going on in his swim trunks either. But I do know that even with America's bottomless appetite for skank, we possess some unbelievably repressed attitudes toward genuine physical affection. We'll Google "nip slip" all the live-long day, but freak out at a son brushing a hand against the side of his mother's bathing suit top. We'll speculate on whether a starlet is getting it on with a politician whenever someone shoots a long-lens photo of them shaking hands. We're so comfortable with the prurient, the gotcha! But how many random news sites or commenters on them could confidently recognize familial warmth if they saw it? Maybe the idea that a teenage child would still even want to put an arm around his mother, would offer an unsolicited kiss, is so rare as to be downright odd. But that doesn't automatically make it weird or gross or creepy. And as any mother with a rapidly growing up child knows, it might even make it enviable.