He may be friends with the former New York mayor, but no one criticizes the New Jersey mayor and gets away with it 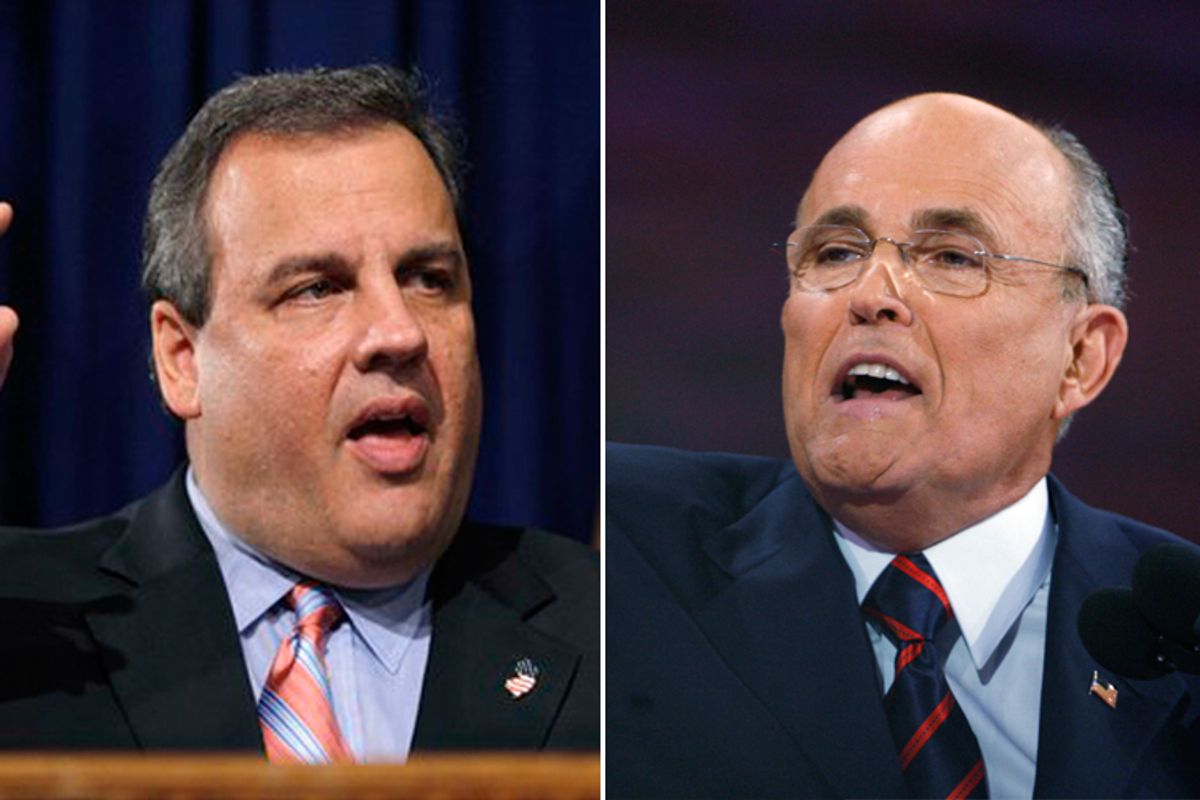 Sad news, patriots: Chris Christie and Rudy Giuliani are fighting. They're both unpleasant bullies who get off on acting like tough guys, so this should probably surprise no one, but it's still a bit like Daddy and other Daddy yelling at each other.

Rudy Giuliani's reputation rests on his tyrannical rule of New York City. While Bloomberg has kept aspects of the Giuliani management style -- like his utterly unaccountable and institutionally racist NYPD -- in place, he has seriously dialed back the shouty rhetoric. So when the post-Christmas snowstorm came and the city's response was atypically inept and slow, Giuliani went around telling everyone that in his New York, all the snow would've been plowed, beaten and shot 41 times within 24 hours.

New Jersey's loud governor was out of town during the storm, and his state's response was similarly inadequate. So last week, Giuliani said Christie should've raced back home. "They elected you governor, they've got an emergency, they expect you to be there," he said. That is actually an incredibly polite and reasonable comment for Giuliani. Chris Christie, on Fox & Friends today, responded:

“Well, he’s wrong. I mean, he’s wrong,” Christie countered Wednesday. “It’s easy when you are out of office to be shooting from the peanut gallery when you no longer have any responsibility, but I have a responsibility to my family," he added. "I would have never gone on the trip if we didn’t have a plan in place to be able to clear the snow.
[...]
“Yeah, I’m just going to chalk it off to a bad morning for the mayor. Maybe he didn’t have a good breakfast or something like that,” Christie quipped.
[...]
“My point is what matters are results. And what the people of New Jersey voted for me for was not to be on the back of a snow plow. They voted for me to get the job done. And we got the job done.”

"I have great respect for Mayor Giuliani and maybe no bran that morning -- I don’t know what the situation was, so we’ll just let it go," Christie concluded.

For the record, the job did not get done, because state highways were impassable. Also, this "responsibility to my family" line is so weird, in terms of a vacation to Disney World.

But this is how Christie responds to his friends, with the weird jokes about breakfast and so on. If a non-friend -- say, a random, non-famous New Jersey resident -- criticizes the governor, Christie instead does that thing where he gets in the guy's face and points his finger and shouts about how stupid the guy is, for the YouTube.