The reflexive call for fewer liberties 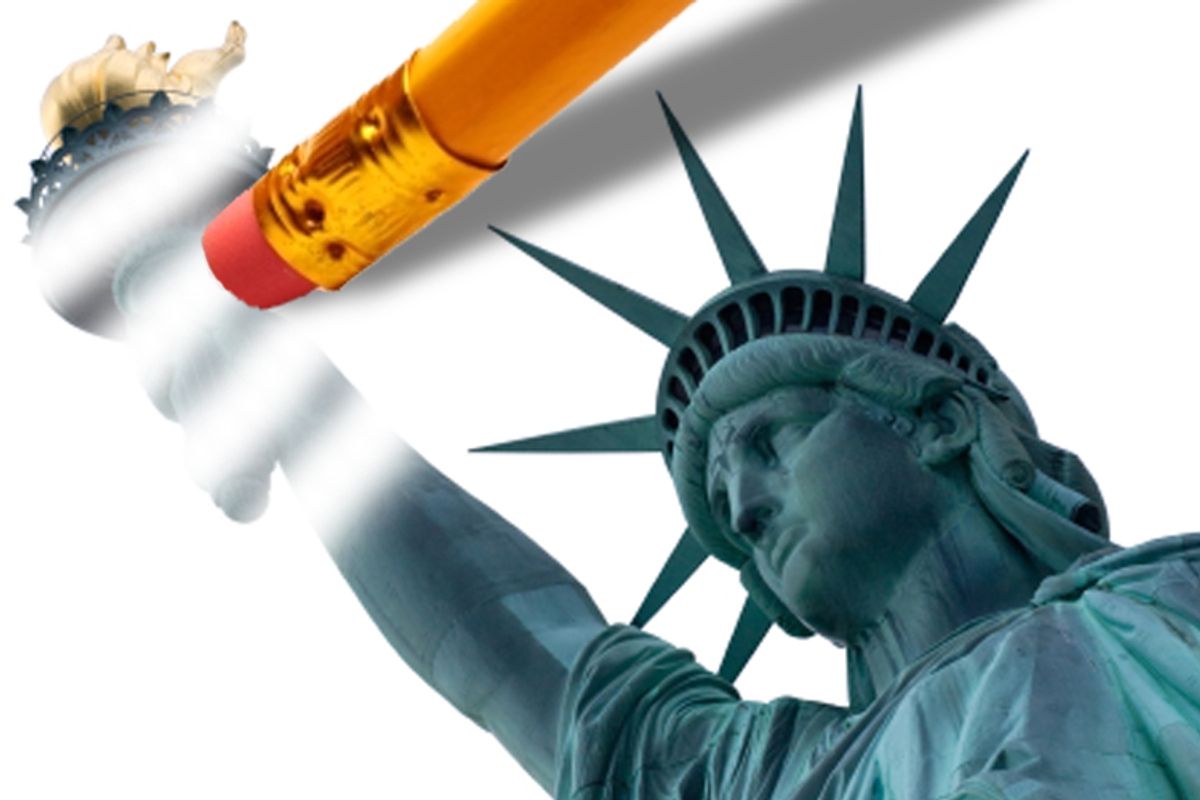 William Galston -- former Clinton adviser and current Brookings Institution Senior Fellow -- has a column in The New Republic about the Gabrielle Giffords shooting that illustrates the mentality endlessly eroding basic American liberty:  namely, the belief that every tragedy must lead to new government powers and new restrictions on core liberties.  The lesson of the Arizona tragedy, he argues, is that it's too difficult to force citizens into mental institutions against their will.  This, he says, is the fault of "civil libertarians," who began working in the 1970s on legal reforms to require a higher burden of proof for involuntary commitment (generally: it must be proven that the person is a danger to himself or to others).  As a result, Galston wants strict new laws imposing a litany of legal obligations on the mentally ill, their friends and family, and even acquaintances, as well as dramatically expanded powers to lock away those with mental illness (with broader definitions of what that means).

Listen to what he proposes:  "first, those who acquire credible evidence of an individual’s mental disturbance should be required to report it to both law enforcement authorities and the courts, and the legal jeopardy for failing to do so should be tough enough to ensure compliance"; those reporting obligations should apply not only to family and friends, but extend to "school authorities and other involved parties."  And "second, the law should no longer require, as a condition of involuntary incarceration, that seriously disturbed individuals constitute a danger to themselves or others"; instead, involuntary commitment should be imposed whenever there is "delusional loss of contact with reality."  He concludes on this melodramatic note:  'How many more mass murders and assassinations do we need before we understand that the rights-based hyper-individualism of our laws governing mental illness is endangering the security of our community and the functioning of our democracy?"

There's so much warped reasoning embedded in this argument that it's hard to know where to begin.  Galston seems to be unaware of this, but what motivated the reforms in this area were the decades of severe, horrifying abuses which those with mental illnesses -- and even those who had none -- suffered as a result of permissive involuntary commitment standards and prolonged forced incarceration.  Those who suffered mental illnesses were locked away for years and sometimes decades despite having done nothing wrong and despite not being a threat to anyone, while countless people who simply exhibited strange or out-of-the-ordinary behavior were deemed mentally ill and similarly consigned.  The psychitaric social worker Alicia Curtis provided just one example:  "There is also a large history of the forced treatment of homosexuality as mental 'illness'."  Indeed, involuntarily committing people in mental hospitals is a time-honored way for stifling any individuality and dissent; see this 2010 New York Times article on how China uses that repressive tactic.

Then there are the factually incoherent claims Galston makes.  He harkens back to some sort of Golden Age of the 1960s when thousands of people were incarcerated against their will who did nothing wrong -- as though that era were relatively free of political assassinations because all the "crazies" were where locked up where they belonged.  Of course, the opposite is true:  there were far more violent attacks on political figures back then (MLK, JFK, RFK, George Wallace, Malcolm X, etc.) than there have been during the relatively peaceful time beginning in the 1980s when involuntary commitment became much more difficult.

Worse, Galston assumes, without offering any evidence, that there is a significant correlation between mental illness and violence, but the reality is the opposite:  the vast, vast majority of people with mental illnesses never hurt anyone.  Writing two days ago in Slate, Vaughn Bell decried "the fact that mental illness is so often used to explain violent acts despite the evidence to the contrary," and documented:

Of course, like the rest of the population, some people with mental illness do become violent, and some may be riskier when they're experiencing delusions and hallucinations. But these infrequent cases do not make "schizophrenia" or "bipolar" a helpful general-purpose explanation for criminal behavior. . . . your chance of being murdered by a stranger with schizophrenia is so vanishingly small that a recent study of four Western countries put the figure at one in 14.3 million. To put it in perspective, statistics show you are about three times more likely to be killed by a lightning strike.

Yet Galston, pointing to Arizona, wants to lock all of them away.  The harm that would come from forcibly consigning thousands and thousands of people have done nothing wrong is so much greater than the harm from the once-every-20-years attack on a political official that the excessiveness of his solution is self-evident.

But that's the key point.  What Galston is doing here is what the American political class reflexively does in the wake of every tragedy:  it immediately seeks to exploit the resulting trauma and emotion to justify all-new restrictions on basic liberties (such as the right not to be locked away against one's will in the absence of a crime or a serious threat to others) and all-new government powers.  Every traumatic event -- in the immediate, emotionally consuming aftermath --  leads to these sorts of knee-jerk responses.  The 9/11 attack immediately gave rise to the Patriot Act, warrantless eavesdropping, a torture regime, due-process-free imprisonment, and ultimately an attack on Iraq.  High-profile, brutal criminal acts have led to repressive measures such as three-strikes-and-out laws and minimum sentencing guidelines, causing the U.S. to maintain the largest Prison State in the world.

And when the so-called Underwear Bomber unsuccessfully attempted to detonate a bomb in an airplane over Detroit at the end of 2009, there were immediate calls -- including from the DOJ -- for loosening Miranda requirements and the right to be brought before a judge, and even a bipartisan bill to deny legal rights even to U.S. citizens arrested on U.S. soil and accused of Terrorism:  all because of that one episode.  In response to that reaction, I wrote:  "Even now, every new attempted attack causes the Government to devise a new proposal for increasing its own powers still further and reducing rights even more, while the media cheer it on.  It never goes in the other direction. . . . every new incident becomes a pretext for a fresh wave of fear-mongering and still new ways to erode core Constitutional protections even further. . . . We never reach the point where we decide that we have already retracted enough rights."  It's Naomi Klein's Shock Doctrine applied to non-economic matters.

What lies at the core of this mindset is desperate pursuit of a total illusion:  Absolute Safety.  People like William Galston believe that every time there is a violent or tragic act, it means that the Government should have done something -- or should have had more powers -- in order to stop it.  But that is the reasoning process of a child.  Even if we were to create an absolute Police State -- the most extreme Police State we could conjure -- acts like the Arizona shooting would still happen.  There are more than 300 million people in the U.S. and, inevitably, some of them are going to do very bad and very violent things.  Thus has it always been and always will be.  The mere existence of bad events is not evidence that the Government needs to be more empowered and liberties further restricted.  Just as there are serious costs to things like the Arizona shootings, there are serious costs to enacting the kinds of repressive systems Galston envisions, yet people like him never weigh those costs.

Having people do bad things is the price we pay for freedom.  There is a cost to all liberty.  Having to hear upsetting or toxic views is the price we pay for free speech; having propaganada spewed by large media outlets is the price we pay for a free press; and having some horrible, dangerous criminals go free is the price we pay for banning the Police from searching our homes without a warrant (the Fourth Amendment) and mandating due process before people can be imprisoned (the Fifth Amendment).  The whole American political system is predicated on the idea that we are unwilling to accept large-scale abridgments of freedom in the name of safety, and that Absolute Safety is a dangerous illusion.  There is a new report today that a police officer in Tuscon stopped Jared Loughner's car for speeding shortly before his rampage, but was unable to search his car because he lacked probable cause to do so.  Obviously, that's regrettable -- if you're a family member of one of his victims, it's horrifying -- but the alternative (allowing Police the power to search whomever they want without cause) is worse:  that's the judgment we made in the Bill of Rights.

It may very well be that it's too difficult in some states to have a person involuntarily committed even when they're a threat to themselves or others.  That's a fair debate to have.  But that's not the case Galston is making.  Instead, he's just drowning in his own TV-generated emotions -- or trying to exploit those who are -- to usher in an amazingly oppressive scheme whereby citizens are required to inform on one another if they suspect someone is a bit mentally off, and the Government is empowered to put them away for a long time even in the absence of any threat they pose.  That's neither rational nor sober; it's hysterical fear-mongering of the kind we see after every incident like this.  It's why American liberties have inexorably eroded.  At the very least, there ought to be a voluntary moratorium on calling for new government powers in the wake of tragedies like this until the emotional intensity dies down and rational discourse can prevail.

UPDATE:  Several people made the point in comments that even had the police been able to search Loughner's car, that would likely not have changed anything, since the firearm he was carrying was legal.