Did you ever wonder why there are so few fundamental differences between Obama and Bush? 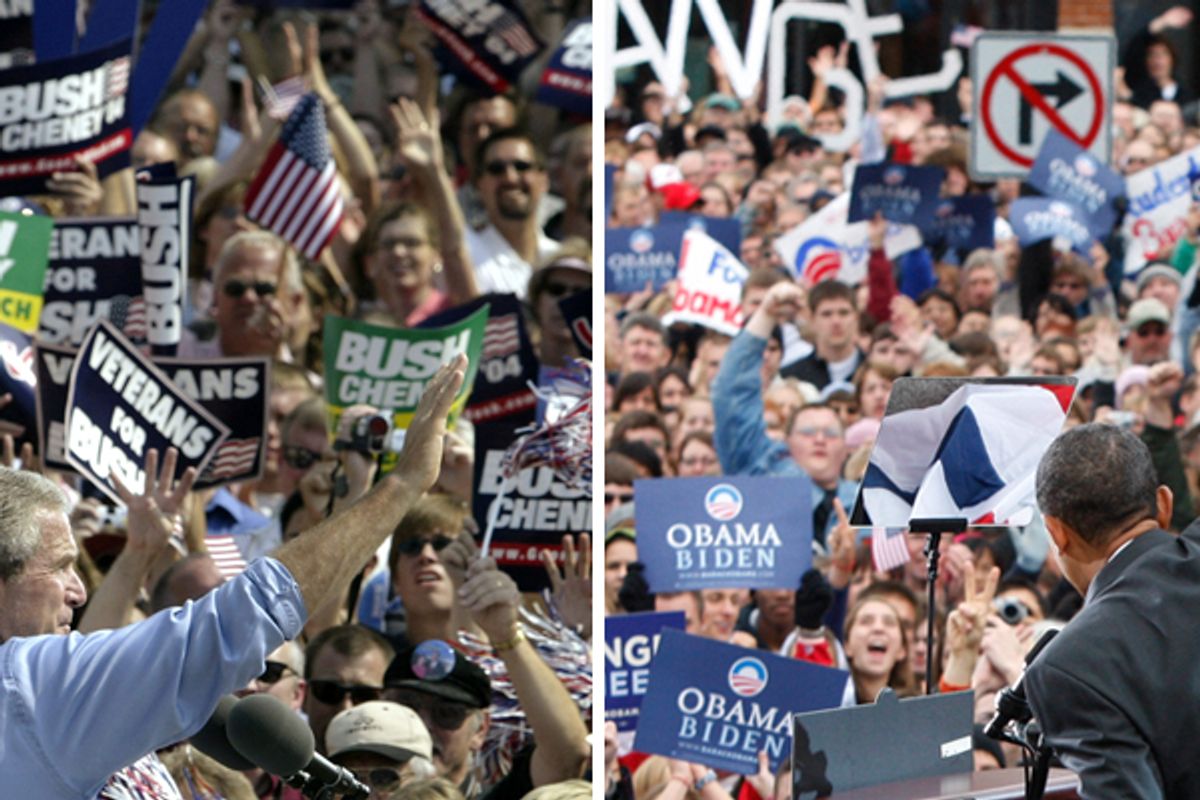 U.S. President George W. Bush is cheered by supporters at a "Victory 2004" election rally in Holland, Michigan, September 13, 2004. Bush is campaigning on a bus tour throughout Michigan before heading to Colorado later in the day. REUTERS/Jason Reed US ELECTION JIR (Â© Reuters Photographer / Reuters)
--

Does it often seem that many American politicians and pundits are talking past each other? That is because they really are. The frustrating nature of public debate arises in large part from the fact that Americans do not share a single worldview.

A worldview is a more or less coherent understanding of the nature of reality, which permits its holders to interpret new information in light of their preconceptions. Clashes among worldviews cannot be ended by a simple appeal to facts. Even if rival sides agree on the facts, people may disagree on conclusions because of their different premises.

Neoliberal globalism: This is more or less the official ideology of the political and corporate and financial establishments, shared by centrist New Democrats as well as by most Republican conservatives in their practice as opposed to their preaching. Shared by Barack Obama and Bill Clinton with George W. Bush, neoliberal globalism combines moderate conservatism in economics with the idea of beneficial U.S. global military hegemony.

In the minds of Democratic and Republican neoliberals, their orthodoxy was validated by three events in the early 1990s: the collapse of the Soviet Union, the economic crisis of Japan and the Gulf War of 1990-91. The collapse of the Soviet Union was interpreted to mean the superiority of capitalism to socialism. The prolonged stagnation of the Japanese economy was interpreted to be, not an omen of similar bubble economies in the U.S. and elsewhere, but rather proof of the superiority of the Anglo-American version of capitalism to more statist kinds of capitalism in East Asia and Europe. The swift victory of the U.S. in the Iraq War, at a relatively low cost in American lives, was interpreted to mean that the Cold War had been succeeded by "unipolarity," in which the U.S. could maintain unquestioned military dominance at low cost on the basis of its gee-whiz military technology. This premise led to the mistaken assumption that technology would permit the Iraq and Afghan wars to be as quick and cheap as the Gulf War had been.

Neoliberals continue to believe that at home governments should provide basic public goods like infrastructure, healthcare and security by "market-friendly" methods, which in practice means vouchers, tax incentives or government contracts for for-profit corporations. Because trade by definition is supposed to be a force for progress, neoliberals see little role for government in trade beyond promoting trade liberalization, providing a business-friendly infrastructure and educating citizens to equip them to compete in the supposed global labor market of tomorrow (in reality, most Americans now and in the future will work in the nontraded domestic service sector, immune to direct competition with foreign workers).

Just as the collapse of the Soviet Union, the economic crisis of Japan and the U.S. victory in the Gulf War shaped the neoliberal worldview, so earlier historic events -- the Great Depression, the rise of fascism and America’s extraordinary mobilization of labor and resources during World War II -- shaped the thinking of social democratic liberals in the mid-20th century and continues to do so today. As social democratic liberals see it, the Great Depression, the third in a series of major depressions since the 1860s, proved that industrial capitalism at both the national and global levels is inherently unstable, without intelligent government regulation and intervention. The abandonment of democracy in many countries during the Depression convinced social democratic liberals that an economic safety net, protecting citizens from unemployment, sickness, poverty in old age and other disasters, is necessary if democratic government is to retain popular support. And the remarkable mobilization of the U.S. economy during World War II convinced social democratic liberals in America that public policy was capable of organizing full employment and high levels of private sector production, even if market forces on their own were insufficient.

How do social democratic liberals differ from neoliberals? Neoliberals assert that the market is more efficient than the state and that it is necessary to "reinvent government" to include elements of privatization or competition. Social democratic liberals reject happy talk about the miracle of the market for the more realistic vision of the mixed economy, in which markets coexist with socialized sectors, in the form of social insurance like Social Security and publicly provided goods like public K-12 schools. In between pure government and pure market are government-sponsored enterprises and regulated private utilities, which if designed properly can be legitimate and useful ways to organize particular kinds of industry or finance.

When it comes to trade and immigration, there is no consensus among social democratic liberals. Some worry about Chinese mercantilism and the effects of immigration on wages, some do not. Some share the neoliberal enthusiasm for the global market, but want the global rules to favor organized labor and to protect the environment. Other social democratic liberals view the promotion of national manufacturing capabilities as an important duty of the nation-state. Without endorsing across-the-board protectionism, many social democratic liberals would be willing to sacrifice a greater degree of international integration in order to allow the U.S. and other countries to have a greater degree of autonomy in undertaking policies to promote full employment and high wages.

Although it was dethroned by neoliberal globalism as the dominant paradigm in the late 20th century, social democratic liberalism remains the most important alternative political worldview. The other three American political worldviews -- populist nationalism, libertarian isolationism, Green Malthusianism -- are often represented in public debate, but they have less influence on public policy than neoliberal globalism and social democratic liberalism.

Libertarian isolationism: Libertarian isolationism draws its adherents from both the left and the right. According to the libertarian isolationist interpretation of history, the U.S. changed from a decentralized republic into a militarized, authoritarian empire in the late 19th century, when the Spanish-American War made the U.S. a colonial power and trusts and cartels took over the economy. Every president since McKinley, they believe, has been a tool of a self-aggrandizing crony capitalist oligarchy, which exaggerated the threats of Imperial and Nazi Germany and Japan and the Soviet Union and communist China and now of Islamist terrorism in order to regiment American society and divert resources to the bloated "military-industrial complex." If the libertarian isolationists had their way, the U.S. would abandon foreign alliances, dismantle most of its military, and return to a 19th-century pattern of decentralized government and an economy based on small businesses and small farms.

Green Malthusianism: This worldview synthesizes mystical versions of environmentalism with alarm about population growth in the tradition of the Rev. Thomas Malthus. The Green Malthusian perspective holds that the Industrial Revolution ended humanity’s allegedly harmonious prior relationship with Nature, permitted an explosion of the human population beyond the alleged carrying capacity of the planet and threatens to produce runaway global warming, along with pollution, resource depletion and mass species extinction. In order to restore balance between humanity and the ecosystem, human numbers must be dramatically reduced. Green Malthusians disagree about whether restoring harmony with nature requires abandoning modern technology or using "appropriate" technology, a blend of pre-modern and modern machines and techniques that minimize the human "footprint" on the earth. Even though its lack of carbon emissions makes it an obvious tool for combating global warming, Green Malthusians generally oppose nuclear energy because of its toxic byproducts, and perhaps also because it did not exist in the premodern past that they idealize. Many Green Malthusians attribute virtue to the technologies and landscapes of the First Industrial Revolution -- the railroad, the trolley, the streetcar city -- and bitterly denounce as wicked the technologies and landscapes of the Second Industrial Revolution -- the car, the truck, the plane and the suburb and edge city.

If this is an accurate description of the most important worldviews that provide the basic assumptions that Americans bring with them into public debate, it would explain a number of puzzles. To begin with, it would explain how the term "progressive" can be applied, at the price of great confusion, to members of all of the groups other than populist nationalists. Self-described "progressives" include libertarian isolationists and neoliberal globalists, Green Malthusians and social democratic liberals. This taxonomy explains why social democratic liberals can share the concern of national populists about possible wage-lowering effects of excessive immigration, while despising and repudiating national populist obsessions with maintaining the supposed purity of the American racial, ethnic or religious "stock." It explains why populist nationalists and libertarian isolationists often agree on isolationism but not on tariffs or immigration. And it explains why pro-technology, pro-market neoliberal globalists who think they are devout environmentalists frequently discover that they really share little in common with other environmentalists who are ascetic, anti-modern Green Malthusians.

Most important, this explains why there is so little fundamental difference between the policies pursued by centrist New Democrats like Bill Clinton and Barack Obama and Republicans in power, like George W. Bush. Neoliberal Democrats like Clinton and Obama run for office by posing as social democratic liberals; once in power, they carry out the neoliberal globalist agenda favored by America’s financial and corporate elites. Republicans do the same, pretending to be national populists or libertarians on the hustings, and then governing as the right wing of neoliberalism, sharing assumptions with Clinton-Obama Democrats about free trade, deregulated capitalism and the need for some sort of minimal safety net -- preferably a means-tested, voucherized, privatized one that requires Americans to pay brokers and insurance companies.

Half a decade or a decade of economic stagnation and global economic turmoil might eventually discredit the neoliberal globalist consensus, in the way that the crises of the 1970s undermined the earlier social democratic liberal consensus. So far the Great Recession and its aftermath have not been sufficient to force either neoliberal Democrats or center-right Republicans to reconsider their faith in the neoliberal creed. But alternate worldviews continue to find adherents, the century is young, and history is seldom kind for long to establishments and orthodoxies.