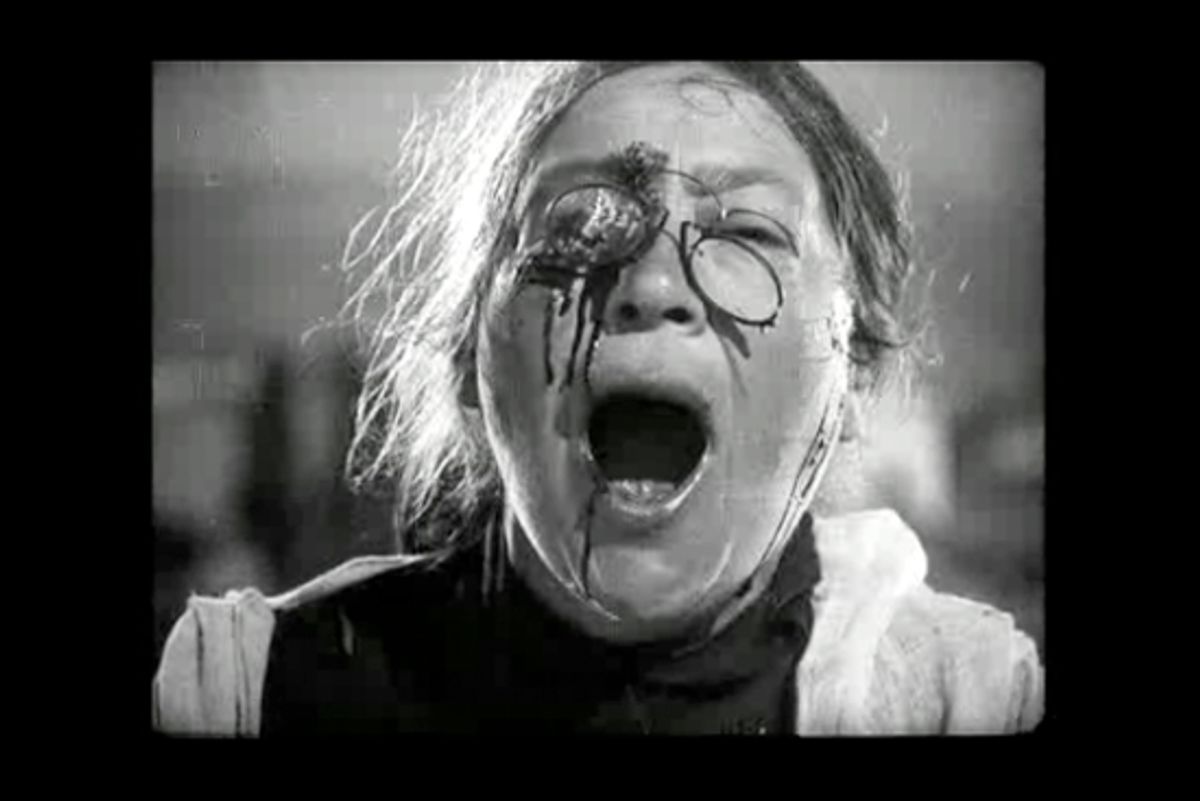 Anybody who thinks that Sergei Eisenstein's "Battleship Potemkin" is an "art film" either hasn't seen the movie at all or had it ruined for them by some combination of a butchered print and a tedious film-history professor. As a remarkable new restoration of the 1925 Soviet silent classic makes clear, "Battleship Potemkin" is first and foremost an action drama, a work of straightforward emotion and pulse-quickening tension. This taut, 71-minute picture is stitched together from more than 1,300 shots, very few of them lasting more than three or four seconds. For better or worse, this film's true revolutionary legacy is not art cinema but Hollywood; it's got a lot more in common with Tony Scott's "Unstoppable" than it does with Andrei Tarkovsky.

I'm not being willful or contrarian or anything -- it's just true. Of course Eisenstein was a fervent supporter of the Bolshevik Revolution, who hoped his story about a fabled 1905 uprising by sailors in the Tsarist navy would inspire the oppressed of the earth to throw off their chains and hoist the red flag (hand-tinted in this version, as at the Moscow premiere). But that context was a lot less important than he assumed at the time, and "Potemkin's" immense cultural impact has almost nothing to do with its purported politics. (The young Joseph Goebbels, whose ideology ran in a different direction, praised the film extravagantly.)

Like other Marxist thinkers and artists of his time, Eisenstein believed that political revolution demanded a revolutionary aesthetics and a revolutionary cinema. He thought his radical innovations in camerawork, composition and (most of all) the quick-cut editing he called "montage" were part of a global shift in mass consciousness, and he was right about that part. Presumably he never imagined that his aesthetic revolution would conquer the world, divorced from the ideology that had inspired it, while the Soviet experiment in social reinvention would become a cruel and miserable failure.

According to film historian Bruce Bennett, "Battleship Potemkin" was personally imported to the United States by silent star Douglas Fairbanks and screened privately for film-industry luminaries on both coasts during the summer and fall of 1926, beginning with a bedsheet projection at Gloria Swanson's house in New York. "Nobody went Bolshevik," quipped a columnist for Photoplay magazine at the time, "but a lot of people left with some revolutionary ideas of filmmaking." It's safe to say this was one of those collisions that changed the course of cultural history. Has there been a year since the late '20s when Hollywood didn't produce multiple imitations of "Battleship Potemkin"?

I'm not so much talking about the most obvious kinds of film-school homage or quotation or rip-off, although the terrifying massacre staged by Eisenstein on the seafront steps of Odessa has been repurposed any number of times, from Brian De Palma's "The Untouchables" to George Lucas' "Star Wars Episode III: Revenge of the Sith" to "Naked Gun 33 1/3." It's more that "Potemkin" pioneered what became a staple Hollywood genre, the heavily fictionalized, inspirational retelling of historical events, built around easily recognizable archetypes of good and evil. Even more than that, Eisenstein's montage technique, which builds both tension and momentum through the rapid counterpoint of different images, different camera angles and different points of view, became the model for all future action and suspense cinema.

Any rerelease of an influential classic always raises at least two questions: Can we still see, through the scrim of history, what originally made the movie seem important? And is it still capable of engaging or entertaining us on its own terms? "Battleship Potemkin" may face some of the same problems with viewers as, say, "Citizen Kane" or Godard's "Breathless" or Bergman's "Persona," in that what was once revolutionary about it now seems part of our universal vocabulary. I expected this newly restored version of Eisenstein's 1925 Russian cut (never seen outside the Soviet Union), the result of almost 20 years of work by film scholars Enno Patalas and Anna Bohn, to be visually impressive, and it certainly is. But I was startled to find myself spellbound by it from beginning to end.

With Eisenstein's 146 text intertitles -- which he conceived as musical or percussive elements -- carefully restored and a newly recorded version of composer Edmund Meisel's score, "Potemkin" no longer seems like a faded relic of Soviet agitprop but becomes a gripping anti-authoritarian melodrama. There's not much acting or characterization in the modern sense; beefy Bolshevik sailor Vakulinchuk (Aleksandr Antonov) strikes heroic poses, while villainous officer Giliarovsky (Grigori Aleksandrov) snickers through his mustache. (Arguably Hollywood's principal improvement on Eisenstein's model was the addition of the star system.)

But the brilliantly mounted early scene in which the ship's commander orders the mutinous sailors -- who have refused to eat borscht made with maggot-infested meat -- to be covered in canvas and then shot had me on the edge of my seat. A crazy-haired Orthodox priest, emerging from the shadows like a crucifix-carrying ogre, calls out for the rebels to accept God's punishment, and some of the condemned men drop to their knees in terror, shrouded by the immense sheet of sailcloth. Exuding the smug, self-satisfied sadism of power, Giliarovsky orders the ship's guards to raise their weapons and prepare to shoot: "Fire into the canvas." And then, at the last possible moment, Vakulinchuk steps forward to strike a blow for proletarian consciousness: "Brothers! Who are you shooting at?"

Eisenstein's mournful, haunting shots of the Odessa waterfront after Vakulinchuk's death, which is the only section where the film engages a contemplative mode, lead us into the Odessa Steps sequence. I felt as if I were seeing that for the first time. Freed from all the imitation and parody, it's both a breathtaking technical exercise and a wrenching glimpse of human suffering set against the cruelty of history. The mother with her dying toddler, the old woman shot in the face, the runaway baby carriage -- Eisenstein could never have believed that the revolutionary regime he supported would itself commit crimes like these, and worse.

But the tragic historical irony surrounding "Battleship Potemkin" does almost nothing to undercut its power, and like all good political art it cannot be contained by politics. Eisenstein used all the tools at his disposal, inventing new ones as he went along, to engage our passions and emotions first and foremost. He was an artist and a showman more than he realized, and perhaps more than he wanted to be. The young David O. Selznick, who would make "Gone With the Wind" 13 years later, urged his MGM colleagues to study "Battleship Potemkin" as "a group of artists might study a Rubens or a Raphael." And anybody who thinks that either Eisenstein or Selznick would be horrified by contemporary Hollywood is kidding themselves. If 3-D had been feasible in 1925, I guarantee that baby carriage would be whizzing off the screen right at your head.

The new 35mm restoration of "Battleship Potemkin" opens Jan. 14 at Film Forum in New York, with other cities to follow. This version is also available on DVD and Blu-ray from Kino International.