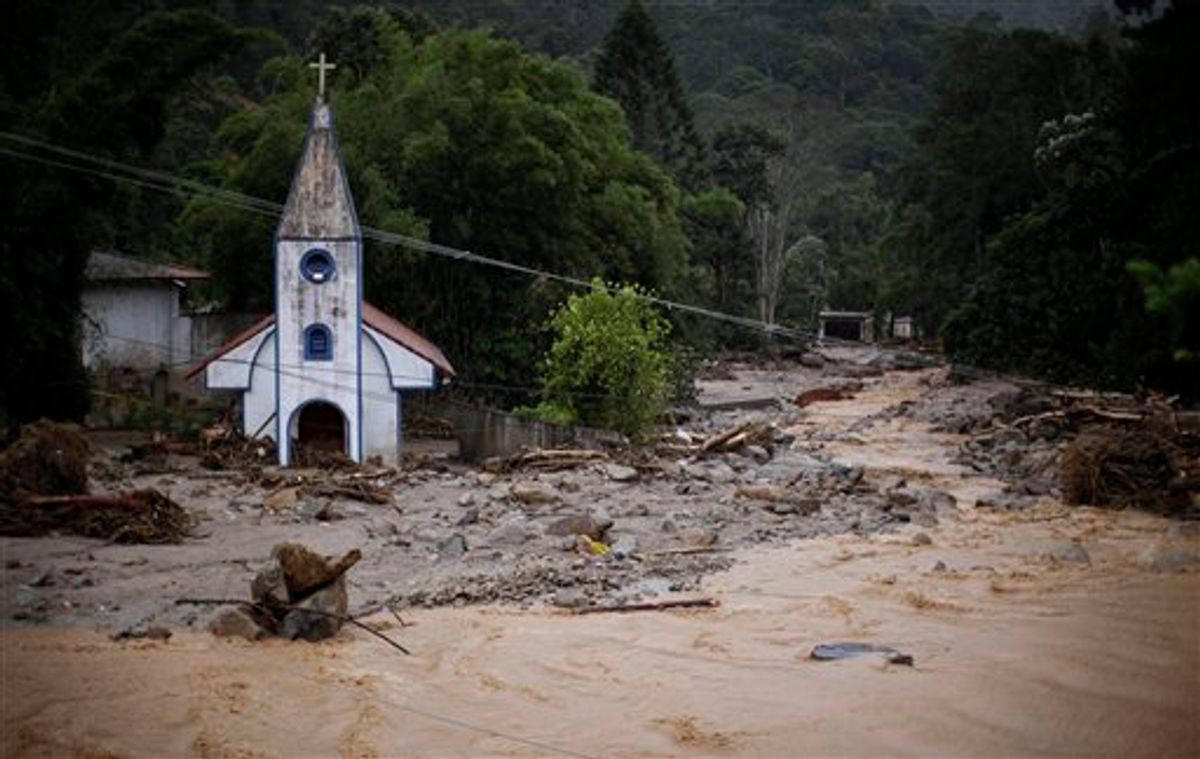 A destroyed church stands surrounded by debris and floodwaters after a landslide in Teresopolis, Rio de Janeiro state, Brazil, Thursday Jan. 13, 2011. At least 350 people have died after landslides hit early Wednesday, and 50 or more were still missing, according to officials. (AP Photo/Felipe Dana) (AP)
--

Floods swept away cities in Australia and Brazil over the past week. With a death toll now over 400 people and rising in Brazil, the disaster will leave thousands homeless and the areas affected will take years to rebuild. We have full coverage of the flood in Brazil here, but this video sums it up pretty well.

Damage is less severe in Australia. Queensland, Australia's "Sunshine State," is underwater due to a combination of record rainfalls and a compromised dam. According to a report in the L.A. Times, waters gushed from the overflowing Wivenhoe Dam yesterday and headed toward Brisbane, Australia's third largest city. Built after a devastating flood in 1974, the dam helps contain the Brisbane River but failed to contain the volume of this year's record rainfalls.

Brisbane is only the latest city affected in the Queensland floods -- so far the floods have claimed 15 lives nationwide. Riverbanks in the city of Toowoomba failed to handle the 6 inches of rainfall that fell in just 30 minutes on already saturated lands. You might've already seen this video of a creek carrying away a parking lot:

People clung to fences and tree branches best they could as a wall of water wreaked havoc on Toowoomba, nicknamed "The Garden City." Speaking to ABC News, the town's mayor Peter Taylor described the horrendous scene:

There's massive damage… It's just blown shops away, there's water literally running out of the front door of shops here as a major flash flood came through the middle of the city.

Some houses have been taken off their stumps and literally gone down the creek. It's been through buildings over buildings, washed cars away that type of thing. Horrific, really horrific circumstances.

While it's too soon to tell the full extent of the damages, the long-term impact and implications of such a large-scale disaster could have global implications. According to ClimateWire (via the New York Times), global coal prices have already soared due to the record rains in the resource-rich state of Queensland.