Water and mud wipe out north side of Rio de Janeiro, survivors search for food, water, and medication 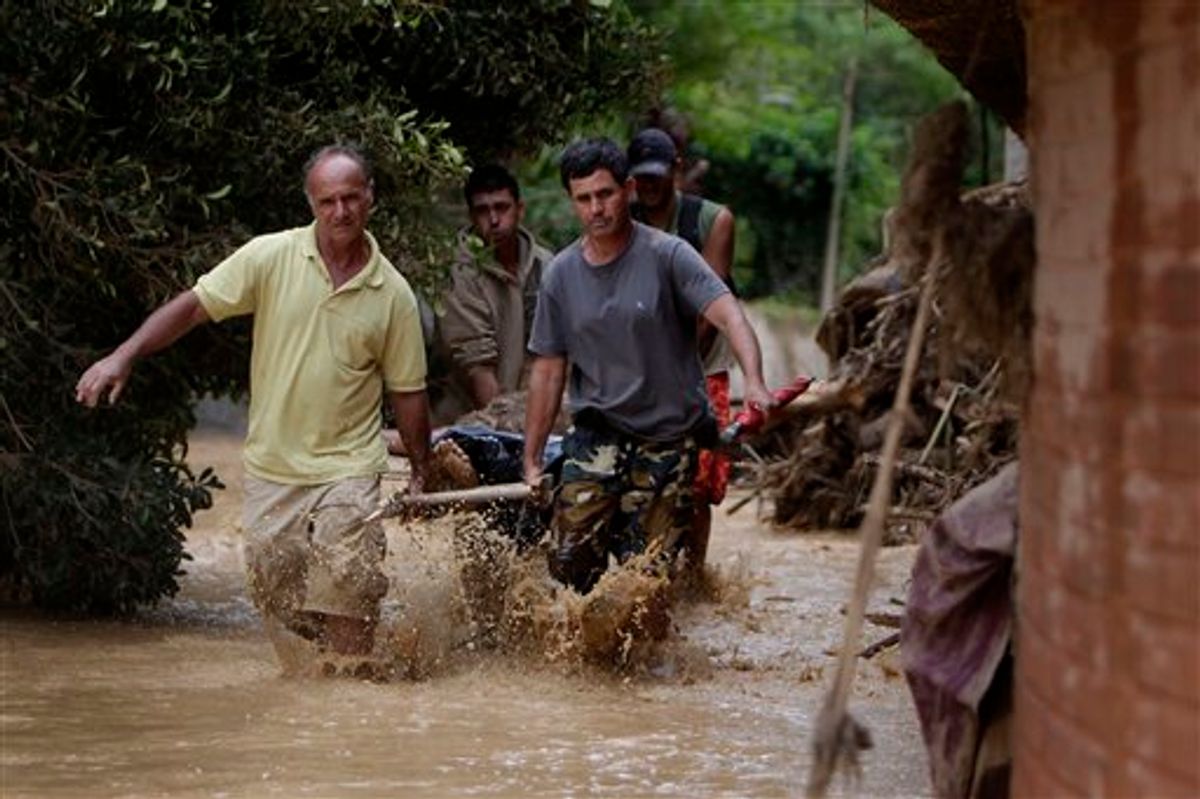 UPDATE:  Brazil's Folha.com now cites a death toll number at approximately 416, with 169 dead in Peresópolis, 187 in Nova Friburgo, 39 in Petrópolis, 17 in Sumidouro, and 4 in São José do Vale do Rio Preto.

Walls of earth and water swept away homes in the mountains north of Rio de Janeiro, wiping out families and leaving survivors scrambling Thursday to reach still-trapped neighbors.

At least 355 people died in three Rio state towns after slides hit at about 3 a.m. Wednesday, and 50 were still missing, officials said. Another 34 people had already died in floods and slides since Christmas in southeastern Brazil.

"We were like zombies, covered in mud, in the dark, digging and digging" after the slides hit at about 3 a.m. Wednesday, said Geisa Carvalho, 19.

A tremendous rumble awoke Geisa and her mother Vania Ramos as tons of earth slid down a sheer granite rock face onto their neighborhood. The power was out, but by lightning flashes they could see a torrent of mud and water rushing just a few feet (meters) from their home -- and the remnants of their neighbors' houses that were swept far down a hill.

"I don't even have the words to describe what I've seen," said Ramos, during a 5-mile (8-kilometer) hike to the main part of her town in search of food and water. "A lot of our friends are dead or missing. There are people we may never find."

Carvalho and Ramos said they ran out of their home moments after the mudslide and joined neighbors in digging for survivors with bare hands and sticks. They quickly located a family of four who had died under the rubble of their home -- and said another neighbor's 2-month-old baby was washed away in his crib and has yet to be found.

Nearly all the homes in their Caleme neighborhood were swept to the bottom of a hill, seemingly turned inside out. Tangles of plumbing were wrapped in trees, children's' clothing littered the earth, massive trees were tossed about like toothpicks. A river of water and mud flowed through the streets as a light rain continued to fall Thursday.

Only a few rescuers had managed to hike to Caleme by Thursday and they only had shovels and machetes -- not the heavier equipment that may be needed to hunt for survivors. Residents said they had no food, water or medication, and many made the long walk for help to the center of Teresopolis, about 40 miles (65 kilometers) north of Rio.

Such disasters hit Brazil annually in its rainy summer season and unduly punish the poor, who often live in rickety shacks perched perilously on steep hillsides with little or no foundations.

Rio state's Civil Defense department reported on its website that 159 people were killed in Teresopolis, 160 in nearby Nova Friburgo and 4 in neighboring Petropolis.

Morgues in the cities were full and bodies covered in blankets were laid out in streets.

Officials said the area hit by slides had seen 10 inches (26 centimeters) of rain in less than 24 hours. More rain, possibly heavy at times, is forecast through the weekend.

Survivors across the region were seen wading through waist-high water, carrying what belongings they could, trying to reach higher ground. Many tried desperately to find relatives, though phone service was out in the region and many people were still missing hours after the rain stopped.

"There are so many disappeared -- and so many that will probably never be found," said Angela Marina de Carvalho Silva, a resident of Teresopolis who feared she may have lost 15 relatives, including five nieces and nephews.

"There was nothing we could do. It was hell," she said in a telephone interview.

Carvalho Silva took refuge in a neighbor's house on high ground with her husband and daughter, and watched the torrential rain carry away cars, tree branches and animals and rip apart the homes of friends and family.

"It's over. There's nothing. The water came down and swept everything away," said her husband, Sidney Silva.

President Dilma Rousseff flew by helicopter over the region Thursday. The nation's Health Ministry said it was sending 7 tons of medications to the area, enough to treat 45,000 people for a month, it said in a statement.

The mayor of Teresopolis, Jorge Mario Sedlacek, decreed a state of emergency, calling the calamity "the worst to hit the town." About 800 search-and-rescue workers from the state's civil defense department and firefighters were digging for survivors, but hopes were dimming.

Heavy rainfall caused havoc in Minas Gerais state north of Rio, where 16 people died in the past month and dozens of communities are in a state of emergency.

In Sao Paulo, flooding paralyzed main thoroughfares in the capital city since Sunday and 21 people died in collapsed homes, mudslides and flooding throughout the state.