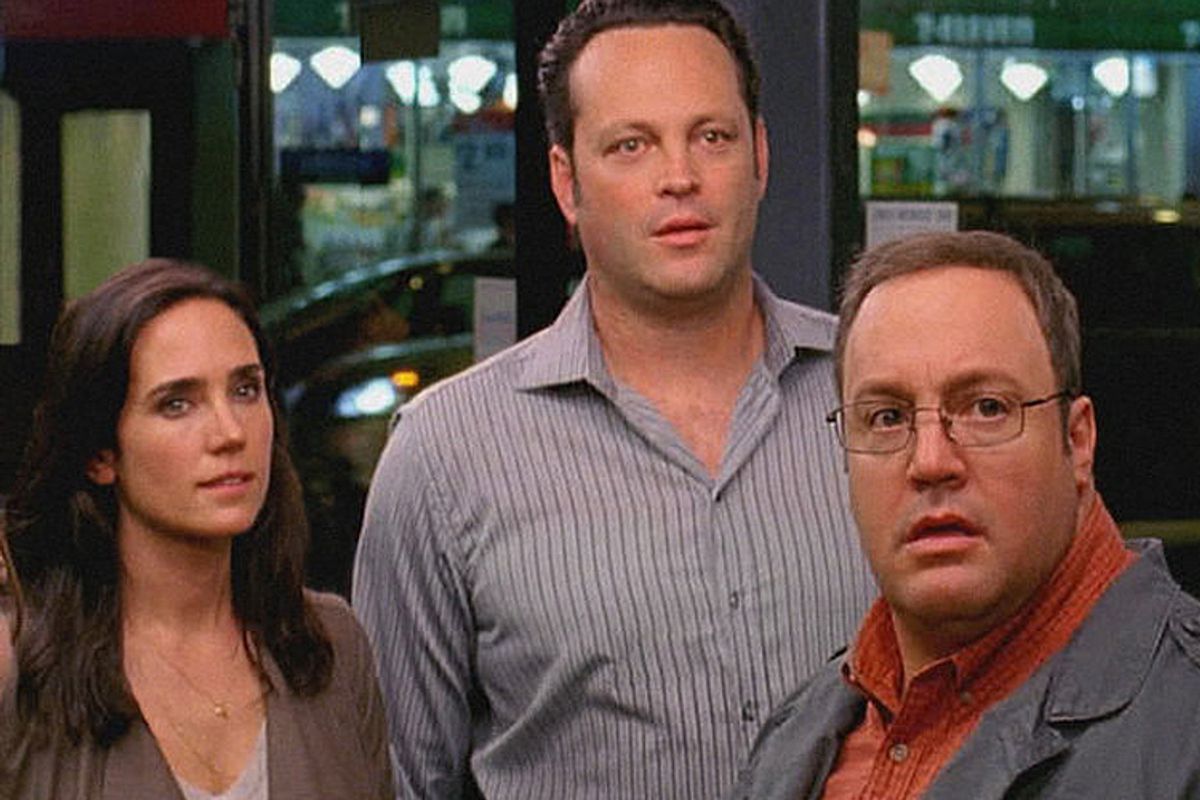 Jennifer Connelly, Vince Vaughn and Kevin James in "The Dilemma"
--

In the category of Hollywood movies I think I have seen but possibly just dreamed about falls "The Dilemma," an implausible, pseudo-comic stew from director Ron Howard that combines an A-list cast, some standard-issue Peter Pan bromance and a creepy Brian De Palma-ish farce about a guy who starts stalking his best friend's wife. Did somebody really make a movie that wastes Jennifer Connelly in a nattering-girlfriend role, casts Winona Ryder (again) as a hopeless psycho bitch -- hey, it's a living! -- and uses the audience's anxiety and uncertainty about Vince Vaughn as a plot point? Apparently so, and I'm not sure whether Howard and screenwriter Allan Loeb are to be commended for aspiring to something odd and original, or condemned for a result that's so messy and miscellaneous.

Vaughn plays Ronny, the smooth-talking co-owner of a Chicago automotive design and engineering firm who discovers that Nick (Kevin James), his best bud and business partner, has a no-good, cheatin' wife. (That would be you-know-who, who's stepping out with a tattooed, muscular dumbass played by Channing Tatum.) But let's get back to Vaughn, who seems to have spent his 30s living hard and appearing in one crappy guy comedy after another, with ever-diminishing returns. I mean, let's be honest: The guy looked like a rising star with unlimited upside from his mid-'90s emergence in "Swingers" through about "Old School" in 2003, which now looks like the Mass in B Minor of 21st-century dude humor. He was charming and roguish, with exquisite comic timing, and appealed to women with his good looks and men with his frat-house conviviality.

Since then: "Be Cool," "Wedding Crashers," "Fred Claus," "Couples Retreat." I mean, woof. That's less a career trajectory than a limo ride in a 2002 Hummer that smells of barfed-up Jägermeister. And if we're still being honest and if we admit that female celebs face this kind of scrutiny all the time, let's add that Vaughn doesn't look so great these days. He plays opposite Kevin James here, and both of them are swathed in untucked, tentlike garments. It's not altogether clear which one of them is supposed to be the handsome star and which one the chunky sidekick.

It doesn't help that Vaughn doesn't act much like the good-looking hero in "The Dilemma" either. Ronny is way crazier than Ryder's faithless Geneva, who just wants to carve herself a deliciously steamy slice of Channing Tatum right off the pie plate. Unable to tell Nick what's going on as they face a critical deadline -- on a project to make Dodge's electric cars deliver a macho muscle-car roar that'll sound "less gay" -- Ronny pursues Geneva all over town, confronting her at hockey games and coffee shops, shooting photos from her boyfriend's balcony and coming home to Beth (Connelly), his worried almost-fiancée, at odd hours, covered with bruises, full of lies and carrying suspicious wads of cash. Howard is trying to construct a dark, absurdist farce about missed connections and mistaken assumptions; Beth assumes that Ronny, a recovering gambling addict, has fallen off the wagon in some spectacular fashion. But the whole movie is pitched in a hysterical, nonsensical key that just makes it seem totally crazy. However many motorcycle dudes somebody else's wife is screwing, Ronny comes off like a dangerous nutjob, and all these people would be well rid of him.

Yes, this is indeed the movie in which Vaughn's character uses "gay" as a derogatory epithet, while explaining that he means it in the bunnies-and-kittens sense, not the guys-having-sex-with-guys sense, and in which Queen Latifah -- implausibly but amusingly playing an auto-industry exec -- proclaims on several occasions that she's got "lady wood" for Ronny and Nick's highly non-gay idea. I'm just not going to get drawn into it. I mean, if you decide to be offended by a deliberately outrageous movie character saying that electric cars are gay, you might as well spend your life writing letters to Howard Stern about all the stupid stuff he says.

More to the point, the scene is juvenile and just not all that funny, which is the problem with a whole lot of "The Dilemma." Even with a character who seems pathetic and unhinged, Vaughn can deliver a gag with the best of them, and he, James and Latifah rescue some of the overwrought comic setups here through sheer brio. Winona Ryder gets one awesome monologue, but the fatal uncertainty and half-bakedness that plagues this whole movie kills her character dead. Is Geneva evil or just damaged? Did Ron Howard direct "The Dilemma" with his conscious attention, or was he playing Angry Birds the entire time? Is Vince Vaughn's next move a total meltdown or a surprising resurgence? "The Dilemma" raises many questions, but none of them are worth thinking about any further.