Brookings' "centrist" opposition to the rule of law 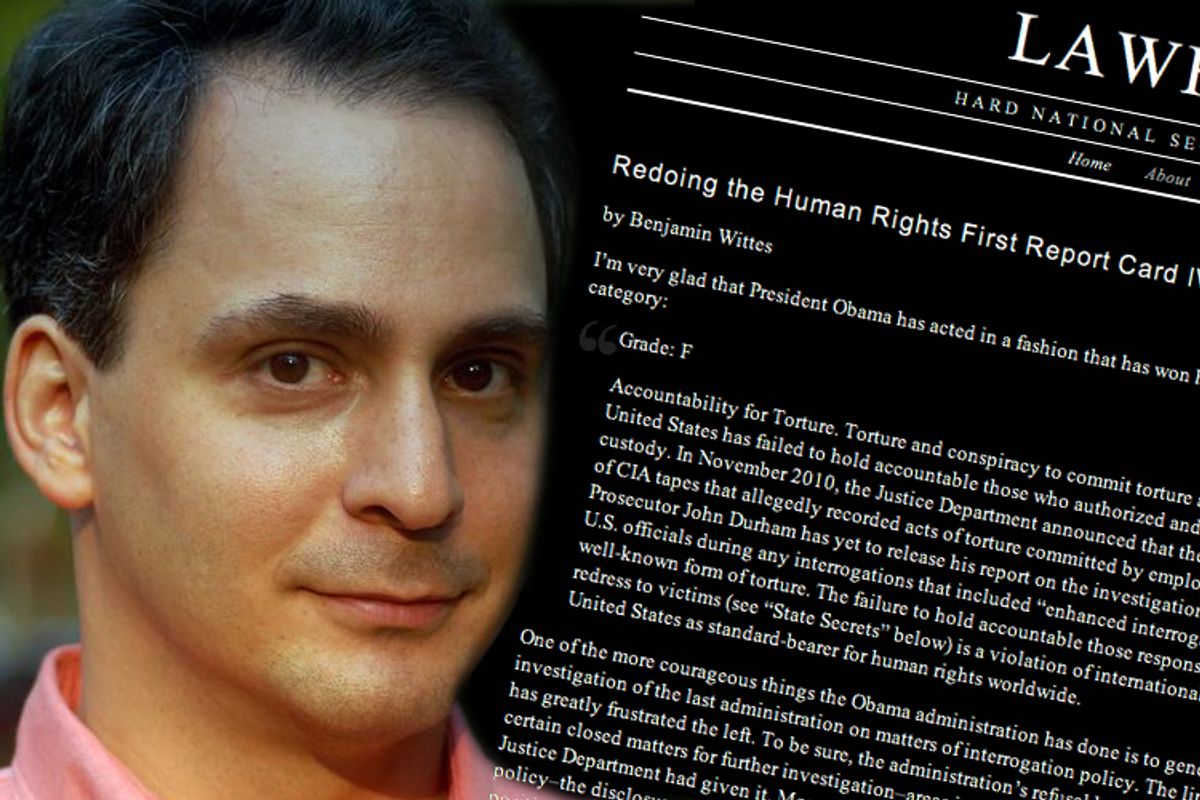 Like many other self-proclaimed "scholars" of the Brookings Institution, Benjamin Wittes never tires of branding himself a "centrist." But like Brookings itself, this so-called centrism is devoid of any coherent worldview and instead has one overarching purpose: to defend Beltway elite prerogatives and specifically the bipartisan orthodoxies of the National Security State. That's why Brookings is so lavishly funded and why it exists, and that -- in almost every instance -- is what D.C. denizens mean when they talk about "centrism": subservient defenders of the status quo.

Dutifully fulfilling his function, Wittes has spent the last several years joining with former Bush OLC lawyer Jack Goldsmith to defend indefinite detention without charges as well as the creation of "national security courts" to allow "preventive detention."  He scorned those who objected to Bush's illegal, warrantless eavesdropping programs as simplistic, ignorant partisans.  When Congress drastically expanded Bush's eavesdropping powers with the 6-month enactment of the Protect America Act, Wittes went to The New Republic to (of course) defend the new powers, prompting Matt Yglesias to say that Wittes was merely fulfilling "his appointed role as 'liberal who agrees with conservatives about all the topics he writes about'."  Wittes was recently held up as the face of "American exceptionalism" by international law professor Kevin Jon Heller for explicitly justifying America's right to impose double standards in light of its objective superiority.  Behold Reasonable Sober Serious Centrism!

Yesterday, Wittes wrote a new post which more clearly than anything I've read in some time conveys exactly what role he and his self-proclaimed "centrist" comrades (including the Brookings Institution) play in our political culture.  Wittes wrote to criticize a "report card" issued by Human Rights First on Obama's civil liberties record; in particular, he takes issue with HRF's awarding of an "F" to Obama in the area of "Accountability for Torture."  The human rights group says that this failing grade is deserved because Obama "has failed to hold accountable those who authorized and perpetrated torture against prisoners in U.S. custody"; independently, the failure "to provide redress to victims (see 'State Secrets' below) is a violation of international law and diminishes the credibility of the United States as standard-bearer for human rights worldwide."

Wittes does not contest any of HRF's factual claims.  Instead, he believes Obama's active obstruction of investigations is one of the President's most commendable acts.  It's really worth examining what he writes because it so vividly exposes the mindset of our Centrist, Serious think tank "scholars" who devote themselves to serving those in power:

One of the more courageous things the Obama administration has done is to generally decline to engage in retroactive investigation of the last administration on matters of interrogation policy.

I've heard a lot of twisted reasoning employed to defend the full-scale immunity which Obama has vested in Bush officials for their chronic lawbreaking.  But I doubt even Robert Gibbs would be willing to stand up in public and call it "courageous."  Obama's decision to protect Bush-era crimes from accountability earned him the praise of conservatives, the gratitude of leading Democratic officials (petrified that their own culpability would be exposed), and the virtually unanimous support of the entire establishment media class.  Initiating investigations and prosecutions of Bush-era crimes would have required substantial political courage; by contrast, blocking all such accountability was the easiest, most cowardly route, as it's what all of official Washington was demanding.  That's the path Obama took.

Also, can someone please tell me what a "retroactive investigation" is?  Are there any other kinds?  I don't believe it's possible to investigate or prosecute acts that occur in the future.  This railing against "retroactive investigations" is nothing more than a deceitful Orwellian concoction by Beltway propagandists to justify why elites -- but nobody else -- are shielded from accountability for their acts.

The lingo is "looking forward, not backwards," and it has greatly frustrated the left.

The hallmark of an establishment "centrist" -- the admission fee -- is to declare loudly that one harbors contempt for the views of "the left" and takes comfort in its losses.  One regularly finds this tactic in Wittes' writings and from most who are eager to have the world see them as "centrists."

To be sure, the administration’s refusal has been imperfect. Attorney General Holder did reopen certain closed matters for further investigation -- areas in which CIA personnel reportedly operated beyond the guidance the Justice Department had given it.

Wittes is angry because Holder has said that there might be prosecutions of those specific, low-level CIA interrogators who were so brutal, sadistic, and criminal that they tortured even beyond the permission slips given by John Yoo and the Bush DOJ.  There have been many deaths -- likely as many as 100 or more -- from American interrogation practices.  Gen. Barry McCaffrey said:  "We tortured people unmercifully. We probably murdered dozens of them during the course of that, both the armed forces and the C.I.A."  But Wittes is upset that those who caused those deaths might be subjected to legal accountability.  He literally wants people to get away with murder because they did it as part of the U.S. Government.  Did he mention that he's a "centrist"?

More generally, there has actually been a great deal of accountability for past detention policy -- the disclosure of internal memos, for example.

The U.S. is the largest Prison State in the world.  We have more people in prison than any other country in the world, both in absolute terms (i.e., more than China and other much more populous countries) and in terms of rate of imprisonment (more than the most repressive nations).   We imprison ordinary Americans for the pettiest of offenses, imposing on them shockingly long prison terms with the most merciless conditions in the Western World.  Would the Brookings Institution or Benjamin Wittes ever object to any of that as gratuitously punitive or excessively focused on "the past"?  Please.  That's not whose interests they're funded to defend.

But when it comes to political elites, everything changes:  merely releasing a few memos is not only accountability, but "a great deal of accountability."  Courtrooms and prisons aren't for our powerful political officials whom centrists revere and serve.  It's only for the dirty rabble.  For elites, you just shine a bit of light on what they did and let them be on their merry, wealthy way.   Let's just repeat that:  for creating a worldwide torture regime, releasing a few memos constitutes "a great deal of accountability."  You've just confronted the living, breathing face of elite lawlessness.  And it's very, very centrist.

The first of these is that the administration is not going to do violence to the two-century-old tradition in American life of incoming presidents’ not prosecuting outgoing ones. Prison has only the most limited role in transitions of power in a democracy–and that role certainly does not include good faith actions to protect the country, even ones of which we come to be ashamed in the cold light of later days.

Those who favor what Wittes calls "the two-century-old tradition in American life of incoming presidents’ not prosecuting outgoing ones" cannot and do not ever answer this question:  if Presidents are shielded from prosecution for criminal acts they commit in office, then what possible motivation do they have to refrain from criminality?  None.  That's exactly why high-level lawbreaking is so rampant:  because Presidents know they enjoy legal immunity -- are above the law -- and that even when they get caught red-handed breaking the law, an army of royal court sycophants and hangers-on in the political and media class -- like Benjamin Wittes -- will crawl forward to insist that they are too important and noble to be punished.  As Gen. Antonio Taguba said after completing his formal investigation into the interrogation program:  "there is no longer any doubt as to whether the current administration has committed war crimes.  The only question that remains to be answered is whether those who ordered the use of torture will be held to account."

What's most extraordinary about this, of course, is that this is exactly the form of elite immunity we were not supposed to have.  In fact, this is what the Founders waged a war to emancipate themselves from.  As Thomas Jefferson put it in an April 16, 1784, letter to George Washington, the foundation on which any constitution must rest is "the denial of every preeminence but that annexed to legal office."  Even the executive-power-revering Hamilton in Federalist 71 argued: "the fundamental principles of good government" require that even the President "be subordinate to the laws." "Law" simply makes no sense, and has no good function, unless all are subordinate to its dictates.

In Federalist 57, Madison emphasized that equal application of the law to political elites was a prerequisite for both a free and cohesive society, and conversely, warned of the consequences should the laws not be applied as stringently to the political class as to ordinary citizens:

The house of representatives. . . can make no law which will not have its full operation on themselves and their friends, as well as the great mass of society. This has always been deemed one of the strongest bonds by which human policy can connect the rulers and the people together. It creates between them that communion of interest, and sympathy of sentiments, of which few governments have furnished examples; but without which every government degenerates into tyranny.

George Washington vowed, in a December, 1795 letter, that there must never be immunity for wrongdoing by high government officials: "The executive branch of this government never has, nor will suffer, while I preside, any improper conduct of its officers to escape with impunity."

All of this has been tossed to the side, radically reversed.  We now have a whole class of highly funded spokespeople whose central mission in life is to insist on exactly the exemptions and immunities which elites -- as the monarch's cronies -- enjoyed in 18th Century England but were never supposed to possess in the United States.  Hence, we find blatant demands for immunity from the rule of law for our most powerful political officials from the likes of Benjamin Wittes (as Joseph Stiglitz documents, the same anti-rule-of-law mentality is now visible in demanding that defrauding mortgage banks and other financial elites be shielded from all consequences).  It's one thing to advocate for such corrupt and radical prerogatives for the nation's most powerful factions; it's another entirely to do so under the banner of "courage" and "centrist" reasonableness.

UPDATE:  I neglected to mention Wittes' trite invocation of this platitude:  this is about "the criminalization of policy differences -- nothing more or less."  Anyone who dismisses as a mere "policy difference" the creation of a worldwide torture regime -- featuring tactics the U.S. had long prosecuted and condemned when used by others and which were the signatures of history's most brutal tyrannies -- is exhibiting some truly warped thinking:  not just legally and politically warped, but morally warped.

UPDATE II:  The Brookings Scholar responds by explaining why he won't respond:  you see, as a defender of torturers, he's much too high-minded and civil to engage those who aren't.  Leaving aside the fact that everything I wrote here was purely substantive, few people are in greater need of reviewing this satirically profane though brilliantly insightful post explaining the distinction between (a) decency and (b) shallow notions of civility:  for the record, I value the former infinitely more than the latter.  Bill Kristol and John Yoo are both extremely "civil" in the sense that Wittes means this -- all while they advocate indecent and repellent ideas.  That, by itself, demonstrates the irrelevance of these vapid notions of "civility" to which Wittes and most DC denizens cling as a means of  justifying what they're actually advocating (we may be defending repulsive and destructive ideas -- we're cheering on wars and insisting on legal immunity for torturers -- but at least we're doing it in a soft-spoken manner while sitting in plush think tank conference rooms with name plates and pitchers of water, which entitles us to respect and deference).