What will the once-reviled dictator's return mean for Haiti? 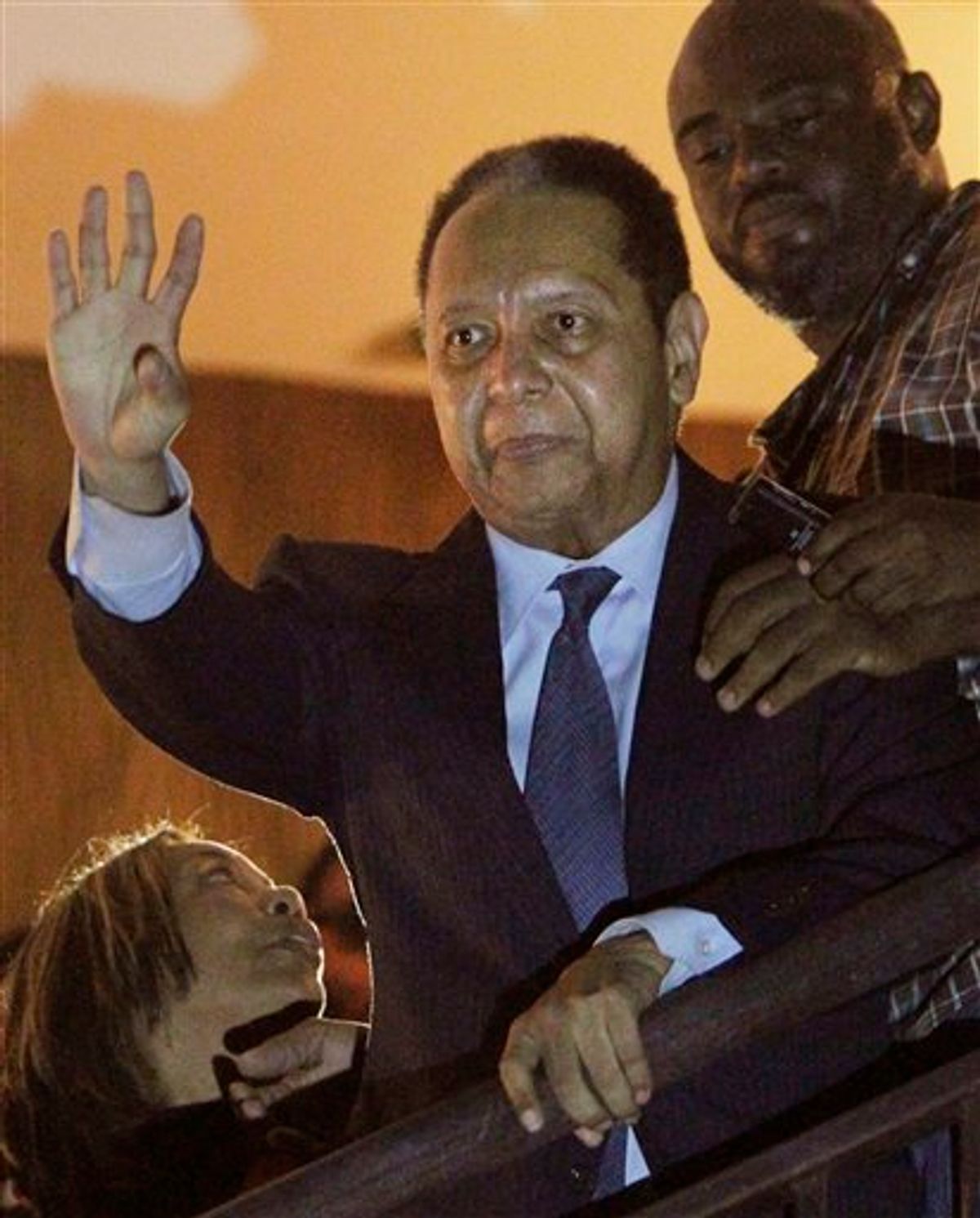 ALTERNATIVE CROP OF PAP109 - Haiti's former dictator Jean-Claude "Baby Doc" Duvalier, center, waves to supporters from a hotel balcony after his arrival in Port-au-Prince, Haiti, Sunday Jan. 16, 2011. Duvalier returned Sunday to Haiti after nearly 25 years in exile, a surprising and perplexing move that comes as his country struggles with a political crisis and the stalled effort to recover from last year's devastating earthquake. (AP Photo/Dieu Nalio Chery) (AP)
--

Jean-Claude "Baby Doc" Duvalier, a once feared and reviled dictator who was ousted in a popular uprising nearly 25 years ago, has made a stunning return to Haiti, raising concerns he could complicate efforts to solve a political crisis and the stalled reconstruction from last year's devastating earthquake.

Duvalier's arrival at the airport Sunday was as mysterious as it was unexpected. He greeted a crowd of several hundred cheering supporters but did not say why he chose this tumultuous period to suddenly reappear from his exile in France -- or what he intended to do while back in Haiti.

"I'm not here for politics," Duvalier told Radio Caraibes. "I'm here for the reconstruction of Haiti."

His longtime companion, Veronique Roy, told reporters at one point that he planned to stay three days, but gave no further details.

Spokesman Henry Robert Sterling said Duvalier was inspired by the earthquake to come back to Haiti and would discuss his reasons at a Tuesday news conference.

"He wanted to come back to see how is the actual Haitian situation on the people and the country," Sterling said outside the hotel in the hills above downtown where Duvalier and Roy were secluded.

President Rene Preval, a former anti-Duvalier activist made no public statement on the former dictator's re-emergence, though he told reporters in 2007 that Duvalier would face justice for the deaths of thousands of people and the theft of millions of dollars if he returned.

Duvalier, however, apparently faces no charges in Haiti and there were no attempts to arrest him. National Police for a time guarded him at a luxury hotel before withdrawing, leaving security to hotel guards.

"He is a Haitian and, as such, is free to return home," Bellerive told The Associated Press.

Asked if Duvalier could destabilize the country, the prime minister said: "Until now, there's no reason to believe that."

The 59-year-old Duvalier took power at age 19 as part of a father-and-son dynasty that presided over one of the darkest chapters in Haitian history, a period when thuggish government secret police force known as the Tonton Macoute stifled any dissent, torturing and killing opponents.

He came back on an Air France jet in a jacket and tie to hugs from supporters, waving to a crowd of about 200 as he climbed in an SUV and headed to a hotel with Roy.

"He is happy to be back in this country, back in his home," said Mona Beruaveau, a candidate for Senate in a Duvalierist party who spoke to the former dictator at the immigration office inside the airport terminal. "He is tired after a long trip."

Later, Duvalier appeared on a balcony of the Karibe Hotel and waved to supporters and journalists outside. All he said was "tomorrow, tomorrow," apparently referring to the news conference. The government sent national police officers there to provide security.

Roy, speaking briefly to reporters, was asked why he had returned now. "Why not?" she replied.

Once a teenage ruler, Duvalier is now a large, stocky man with graying hair. He sometimes seemed disoriented as he faced the crowd, as if he were struggling to keep his eyes open.

His return comes as the country struggles to work through a dire political crisis following the problematic Nov. 28 first-round presidential election.

Three candidates want to go onto a second round meant for two. The Organization of American States sent in a team of experts to resolve the deadlock, recommending that Preval's candidate be excluded -- and the arrival of Duvalier has at least briefly overshadowed speculation about how the government might respond. OAS Secretary-General Jose Miguel Insulza was scheduled to be in Port-au-Prince to meet with Preval on Monday.

The country meanwhile is dealing with a cholera outbreak that has killed more than 3,500 people since October and more than 1 million people are living in crowded, squalid tent encampments after their homes were destroyed from the Jan. 12, 2010, earthquake.

At one of those camps, there was some enthusiasm for Duvalier's return.

"I don't know much about Jean-Claude Duvalier but I've heard he did good things for the country," said 34-year-old Joel Pierre. "I hope he will do good things again."

Nearby, 42-year-old Marline Joseph, living in the camp with her three children, was also somewhat hopeful. "He's here, that's good. Now, what is he going to do for the country?"

But the human rights groups Amnesty International and Human Rights Watch issued statements urging Haiti to hold Duvalier accountable for the torture and killing of civilians during his 15-year rule.

"The Haitian authorities must break the cycle of impunity that prevailed for decades in Haiti," said Javier Zuniga, a special adviser at Amnesty International. "Failing to bring to justice those responsible will only lead to further human rights abuses."

Haitians danced in the streets to celebrate the overthrow of Duvalier back in 1986, heckling the tubby, boyish tyrant as he drove to the airport and was flown into exile in France. Most Haitians hoped the rapacious strongman had left for good, closing a dark chapter of terror and repression that began under his late father, Francois "Papa Doc" Duvalier in 1957.

But a handful of loyalists have been campaigning to bring Duvalier home from exile in France, launching a foundation to improve the dictatorship's image and reviving Baby Doc's political party in the hopes that one day he can return to power democratically. To their advantage is the fact that half the people in the country are younger than 21 -- and weren't alive during Duvalier's rule.

"We want him to be president because we don't trust anyone in this election. He did bad things but since he left we have not had stability. We have more people without jobs, without homes," said Haiti Belizaire, a 47-year-old Duvalier supporter in the crowd outside the airport.

The Duvaliers tortured and killed their political opponents, ruling in an atmosphere of fear and repression ensured by the bloody Tonton Macoute, their feared secret police force.

The end of his reign was followed by a period known as deshoukaj or "uprooting" in which Haitians carried out reprisals against Macoutes and regime loyalists, tearing their houses to the ground.

Duvalier has been accused of pilfering millions of dollars from public funds and spiriting them out of the country to Swiss banks, though he denies stealing from Haiti

But there have been repeated suggestions Duvalier faces money problems. Swiss lawmakers in September approved a bill that would make it easier for the country to seize cash stashed by deposed dictators. The SDA news agency reported that Haiti would receive about $7 million seized from Duvalier.

The return baffled Haiti experts and has thrown the country's entire political situation into question. Immediately speculation began about whether exiled former President Jean-Bertrande Aristide also might return, though his office in South Africa made no comment on the issue.

"I was shocked when I heard the news and I am still wondering what is the next step, what Preval will say and obviously what Aristide will be doing," said Robert Fatton, a Haitian-born history professor at the University of Virginia and author of "The Roots of Haitian Despotism."

"If Jean-Claude is back in the country I assume Aristide will be trying to get back as quickly as possible."

Fatton wondered what role the French government played in Duvalier's return, saying they would have had to have been aware that the ex-despot was boarding an Air France jet to go home.

Author Amy Wilentz, whose book "The Rainy Season" is a definitive account of the aftermath of Duvalier's exile and Aristide's rise, said: "This is not the right moment for such upheaval."

"Let's not forget what Duvalierism was: prison camps, torture, arbitrary arrest, extrajudicial killings, persecution of the opposition," she wrote in an e-mail to AP. And, she added, "If Haitian authorities allow Duvalier to return, can they thwart exiled President Aristide's desire to come back to the country?"

"Haitians need a steady hand to guide them through the earthquake recovery, not the ministrations of a scion of dictatorship."