The vindication of Dick Cheney

Obama has won the War on Terror debate -- for the American Right. And they're quite appreciative 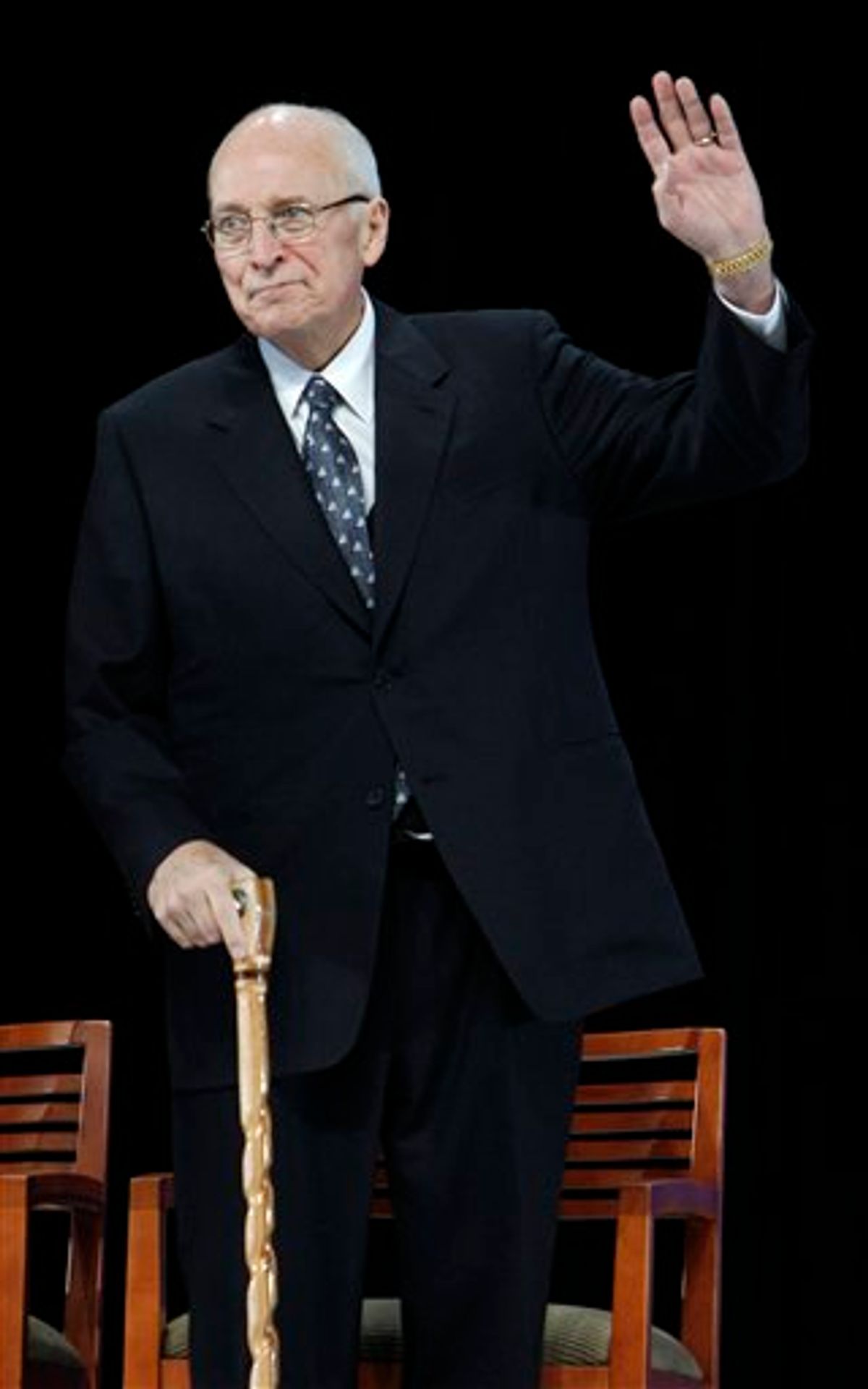 In the early months of Obama's presidency, the American Right did to him what they do to every Democratic politician:  they accused him of being soft on defense (specifically "soft on Terror") and leaving the nation weak and vulnerable to attack.  But that tactic quickly became untenable as everyone (other than his hardest-core followers) was forced to acknowledge that Obama was embracing and even expanding -- rather than reversing -- the core Bush/Cheney approach to Terrorism.  As a result, leading right-wing figures began lavishing Obama with praise -- and claiming vindication -- based on Obama's switch from harsh critic of those policies (as a candidate) to their leading advocate (once in power).

As early as May, 2009, former Bush OLC lawyer Jack Goldsmith wrote in The New Republic that Obama was not only continuing Bush/Cheney Terrorism policies, but was strengthening them -- both because he was causing them to be codified in law and, more important, converting those policies from right-wing dogma into harmonious bipartisan consensus.  Obama's decision "to continue core Bush terrorism policies is like Nixon going to China," Goldsmith wrote.  Last October, former Bush NSA and CIA Director Michael Hayden -- one of the most ideological Bush officials, whose confirmation as CIA chief was opposed by then-Sen. Obama on the ground he had overseen the illegal NSA spying program -- gushed with praise for Obama: "there's been a powerful continuity between the 43rd and the 44th president."  James Jay Carafano, a homeland-security expert at the Heritage Foundation, told The New York Times' Peter Baker last January: "I don’t think it's even fair to call it Bush Lite.  It's Bush.  It's really, really hard to find a difference that's meaningful and not atmospheric."

Those are the nation's most extreme conservatives praising Obama's Terrorism policies.  And now Dick Cheney himself -- who once led the "soft on Terror" attacks -- is sounding the same theme.  In an interview last night with NBC News, Cheney praised Obama for continuing his and Bush's core approach to Terrorism:

He obviously has been through the fires of becoming President and having to make decisions and live with the consequences. And it's different than being a candidate. When he was candidate he was all for closing Gitmo. He was very critical of what we'd done on the counterterrorism area to protect America from further attack and so forth. . . .

Cheney was then specifically asked whether he stood by his early attacks on Obama's national security policies -- "You said you believe President Obama has made America less safe. That he's actually raised the risk of attack. Do you still feel that way?" -- and Cheney, not exactly known for changing his mind, essentially said that, thanks to Obama's continuity, he now does not:

Well, when I made that comment, I was concerned that the counterterrorism policies that we'd put in place after 9/11 that had kept the nation safe for over seven years were being sort of rapidly discarded. Or he was going to attempt to discard them. . . . As I say, I think he's found it necessary to be more sympathetic to the kinds of things we did.

It overstates the case to say there are no differences.  There were some: Obama formally ended the "enhanced interrogation program" (the authorization for which had been withdrawn when he took office); banned CIA black sites (which were empty when he took office); and has not invoked the Article II lawbreaking theories of Bush's first term (Bush largely abandoned them as well in his second term as Congress began legalizing his programs).  And there is a more conciliatory tone, and some greater technocratic efficiency, in some foreign policy pronouncements.  But the crux of Bush/Cheney radicalism -- the mindset and policies that caused much of the controversy -- continues and has even been strengthened.  Gen. Hayden put it best, as quoted by The Washington Times:

"You've got state secrets, targeted killings, indefinite detention, renditions, the opposition to extending the right of habeas corpus to prisoners at Bagram [in Afghanistan]," Mr. Hayden said, listing the continuities. "And although it is slightly different, Obama has been as aggressive as President Bush in defending prerogatives about who he has to inform in Congress for executive covert action."

And that list, impressive though it is, doesn't even include the due-process-free assassination hit lists of American citizens, the sweeping executive power and secrecy theories used to justify it, the multi-tiered, "state-always-wins" justice system the Obama DOJ concocted for detainees, the vastly more aggressive war on whistleblowers and press freedoms, or the new presidential immunity doctrines his DOJ has invented.  Critically, this continuity extends beyond specific policies into the underlying sloganeering mentality in which they're based:  we're in a Global War; the whole Earth is the Battlefield; the Terrorists want to kill us because they're intrinsically Evil (not in reaction to anything we do); we're justified in doing anything and everything to eradicate Them; the President's overarching obligation (contrary to his Constitutional oath) is to keep us Safe; this should all be kept secret from us; we can't be bothered with obsolete dogma like Due Process and Warrants, etc. etc.

Aside from the repressiveness of the policies themselves, there are three highly significant and enduring harms from Obama's behavior.  First, it creates the impression that Republicans were right all along in the Bush-era War on Terror debates and Democratic critics were wrong.  The same theme is constantly sounded by conservatives who point out Obama's continuation of these policies:  that he criticized those policies as a candidate out of ignorance and partisan advantage, but once he became President, he realized they were right as a result of accessing the relevant classified information and needing to keep the country safe from the Terrorist threat.  Goldsmith, for instance, claimed Obama changed his mind about these matters "after absorbing the classified intelligence and considering the various options."  GOP Sen. Susan Collins told the NYT's Baker that Obama "is finding that many of those policies were better-thought-out than they realized."  Cheney boasted that Obama "obviously has been through the fires of becoming President and having to make decisions and live with the consequences."  Predictably -- and understandably -- here's the headline Cheney's interview generated in The Hill this morning:

This has settled in as orthodoxy:  one could criticize Bush/Cheney Terrorism policies only out of ignorance and/or being free of the solemn obligation to Keep America Safe.

Second, Obama has single-handedly eliminated virtually all mainstream debate over these War on Terror policies.  At least during the Bush years, we had one party which steadfastly supported them but one party which claimed (albeit not very persuasively) to vehemently oppose them.  At least there was a pretense of vigorous debate over their legality, morality, efficacy, and compatibility with our national values.

Those debates are no more.  Even the hardest-core right-wing polemicists -- Gen. Hayden, the Heritage Foundation, Dick Cheney -- now praise Obama's actions in these areas.  Opposition from national Democrats has faded away to almost complete nonexistence now that it's a Democratic President doing these things.   What was once viewed as the signature of Bush/Cheney radicalism is now official, bipartisan Washington consensus: the policies equally of both parties and all Serious people.  Thanks to Barack Obama, this architecture is firmly embedded in place and invulnerable to meaningful political challenge.

Third, Obama's embrace of these policies has completely rehabilitated the reputations and standing of the Bush officials responsible for them.  Yesterday, J. Gerald Herbert -- a long-time DOJ official -- told The Raw Story that Obama's refusal to investigate or prosecute Bush era crimes is both a violation of DOJ's duties and sets a "dangerous precedent" by vesting lawbreaking elites with immunity.  The active protection of torturers and other high-level lawbreakers both signals that they did nothing seriously wrong and, independently, ensures that such conduct will be repeated in the future.

But Obama's impact in this area extends far beyond that.  Dick Cheney is not only free of ignominy, but can run around claiming vindication from Obama's actions because he's right.  The American Right constantly said during the Bush years that any President who knew what Bush knew and was faced with the duty of keeping the country safe would do the same thing.  Obama has provided the best possible evidence imaginable to prove those claims true.

Conservatives would love to bash Obama for being weak on Terrorism so that, in the event of another attack, they can blame him (and Cheney, in last night's interview, left open that possibility by suggesting Obama may suffer from unknown failures).  If it were at all possible, they'd be out accusing him of abandoning critical programs that Keep us Safe; that's what they do best.  But they cannot with a straight face claim that Obama has abandoned their core approach, so they do the only thing they can do:  acknowledge that he has continued and strengthened it and point out that it proves they were right -- and he was wrong -- all along.   If Obama has indeed changed his mind over the last two years as a result of all the Secret Scary Things he's seen as President, then I genuinely believe that he and the Democratic Party owe a heartfelt, public apology to Bush, Cheney and the GOP for all the harsh insults they spewed about them for years based on policies that they are now themselves aggressively continuing.

Obama has won the War on Terror debate -- for the American Right.  And as Dick Cheney's interview last night demonstrates, they're every bit as appreciative as they should be.

UPDATE:  The Council on American-Islamic Relations today sued the Obama administration on behalf of Gulet Mohamed, demanding that they allow the American teenager back into his own country.  The background on this travesty is here.

UPDATE II:  In Qatar on Monday, the investigative journalist Seymour Hersh delivered a speech "expressing his disappointment with President Barack Obama and his dissatisfaction with the direction of U.S. foreign policy"; echoing these former Bush officials, Hersh "said he was writing a book on what he called the 'Cheney-Bush years' and saw little difference between that period and the Obama administration."  He added that "U.S. foreign policy had been hijacked by a cabal of neoconservative 'crusaders' in the former vice president's office and now in the special operations community."  For his efforts, Hersh was promptly mocked by Foreign Policy's Blake Hounshell, who scoffed at Hersh's "rambling, conspiracy-laden diatribe" without contesting a single claim, but he need not engage the substance of Hersh's statements, because -- unlike Hersh -- both Hounshell and Foreign Policy are Deeply and Profoundly Serious.

UPDATE III:  At a preliminary hearing today on Gulet Mohamed's emergency petition to be removed from the no-fly list so that he can return back home to his country, the federal judge assigned to the case "said Mohamed's inability to return to the U.S. appears to be a 'clear violation' of his rights" and "that this individual, absent some extraordinary circumstance, would have an absolute right to re-enter the United States."  Those insisting that it's terribly unfair to compare the Bush/Cheney Terrorism policies to Obama's, or that Obama is justified in doing what he's doing, should explain that to Gulet Mohamed (once he's released from lawless detention) and to his family.