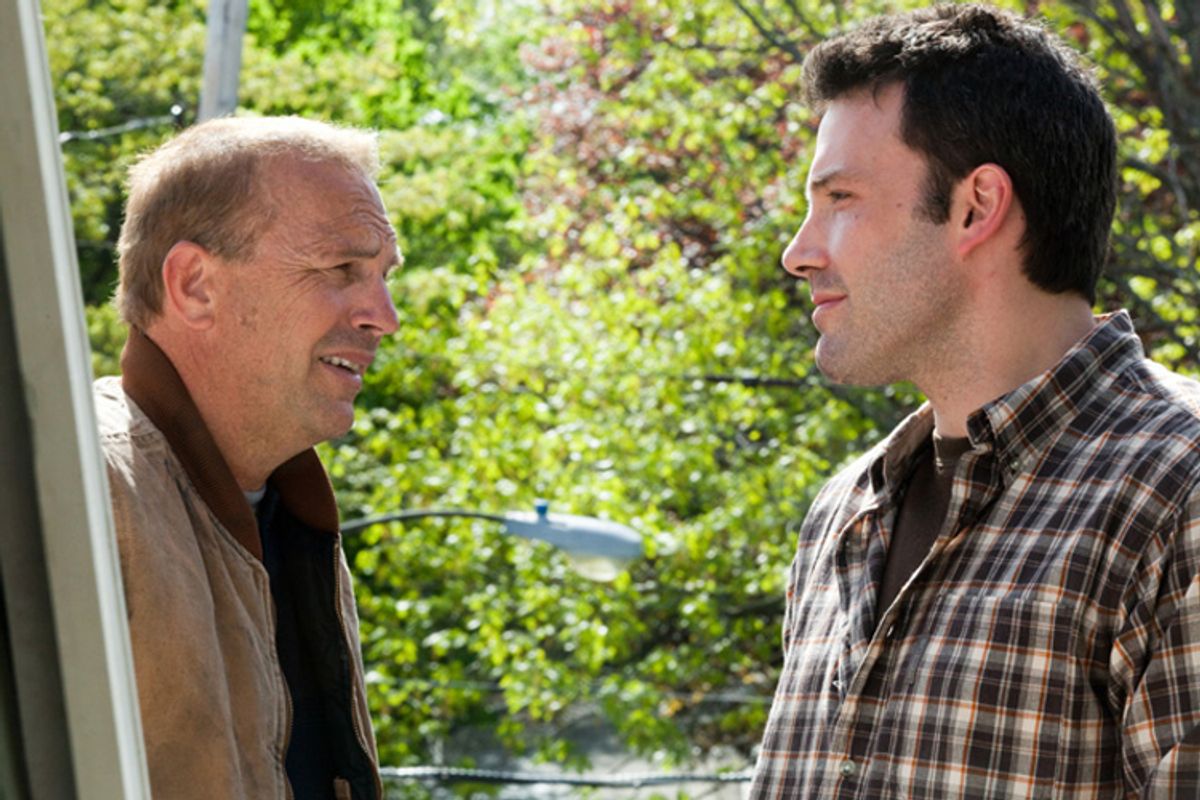 Kevin Costner and Ben Affleck in "The Company Men"
--

In "The Company Men," which is the filmmaking debut of "ER" creator John Wells, Kevin Costner plays a modest supporting role as a middle-aged Boston contractor named Jack Dolan. This looks like the most fun Costner has had on-screen in many years, and it reminded me that he's quite a talented and enjoyable actor when not called upon to carry an entire movie with his stereotypical twinkle and manliness. Although the official protagonist of the story is his unemployed MBA brother-in-law, Bobby Walker (Ben Affleck), Jack is the key to this quasi-Dickensian fable of the recession, and the link writer-director Wells wants to draw between a lost American past and a rootless American present.

While Bobby has been pulling down a six-figure income shuffling paper at an amorphous multinational corporation called GTX, Jack has been making a living on a human scale, building and renovating houses, meeting a payroll and supporting his family in a modest, older, inner-suburban house. The recession has hurt Jack's business too, but when GTX implodes after the 2008 financial crash, and Bobby finds himself among the masses of unemployed and nearly unemployable mid-career executives whose German cars, Bermuda vacations and weekly golf games are suddenly in jeopardy, Jack steps up to help. Setting aside their constant bickering, he takes Bobby aside at a family gathering to offer him a job through the coming winter.

"Hanging drywall?" Bobby says in disbelief. "Thanks, Jack, but I don't exactly see myself bangin' nails." He stalks away and Jack, seen only in silhouette against bright outdoor light, turns to his sister, Maggie (the wonderful Rosemarie DeWitt), and mutters quietly: "Your husband's such a dick."

Taken as a whole, "The Company Men" is about what you'd expect from an old-school TV showrunner: straightforward topical melodrama, with a throbbing social conscience, sympathetic characters, good actors and a script that regularly grabs a hammer from Jack's tool belt and attacks you with it, just in case you've wandered away from the theme. (In other words, it's a John Sayles movie in spirit, if not in fact.) Maybe it's the grouchy gravitas that Tommy Lee Jones projects and maybe it's the gouges and protrusions and rugged geography of his face, but as usual he gets to be the voice of the movie. Playing Gene McClary, a once-loyal V.P. forced out by evil CEO Jim Salinger (Craig T. Nelson), Jones not once but twice delivers sermons on the theme of "We used to build things in this country, dammit, and now it's all computers and big words and other pantywaist crap nobody can understand."

Wells dresses up the movie nicely with insider corporate-speak, gags about the horrendous "out-placement" centers where laid-off executives spend their days before hitting the bars, a few gratuitous shots of Maria Bello in her underwear, and some meaty marital drama between Bobby and Maggie, a sexy, ballsy gal whose working-class roots, it seems, have better prepared her for this vertiginous fall. A lot of this is compelling, after its didactic and heavily thematic fashion, but if you strip most of it away, along with Roger Deakins' handsome cinematography, you're left with the conflict between Jack and Bobby and something like "Shop Class as Soulcraft: The Movie."

Bobby really is an arrogant dick with a prodigious sense of entitlement, and he's got to go through an experience that's something like an alcoholic hitting bottom, or a religious conversion, before he can come back to Jack with the proper humility. Indeed, humping sheets of lumber and hanging drywall turns out not just to be a way to earn a crust of bread, but the key to renewing Bobby's family life and reinvigorating his marriage. Jack is revealed as not just a wiseass Boston carpenter looking out for his sister's family but a figure of almost Christ-like virtue and shamanistic power who connects Bobby to a realm of authentic masculinity and sexual potency, one from which he had been separated by money and possessions and education and the lust for power.

I don't mean to suggest that the tale of Jack and Bobby, and the underlying myths about manhood and work and self-reliance, have no power for me. Quite the opposite: Life in contemporary America is defined, to a large extent, by our anxiety about the fact that we can no longer do things for ourselves. We buy machines we do not understand and throw them away when they stop working in a year or two; we have outsourced the heavy manufacturing jobs to the Far East and the distasteful, low-wage jobs to immigrants.

As ham-fisted as Wells' dialogue is through much of "The Company Men," the phenomenon he describes is real. I can't imagine an American of any political orientation who wouldn't be affected by the idea that our country has lost something it can never get back. And we have all discovered how fragile an economic boom based on intangible, invisible products can be. Of course there are still millions of working-class Americans who actually make or build or repair things. But as that population has grown smaller and more socially insular, those people sometimes seem like symbols or avatars or objects of erotic fascination to the rest of us. (Remember the media's short-lived romance with "Joe the Plumber" during the 2008 campaign?)

Costner plays Jack Dolan as a likably crusty character, but within the larger context of "The Company Men" he's unmistakably a sentimental creation, and almost a supernatural being. Instead of the Magical Negro archetype found in way too many movies about white people in need of soulful healing, Jack is the Magical Working-Class Guy, whose work ethic and tough love replenishes all the spirit that was drained out of Bobby by living in a million-dollar house and driving a Porsche. I recognize that it's mean-spirited and unfair to wonder whether John Wells, for instance, plans to give up his nice house and his Hollywood career in favor of carpentry. More to the point, it's Wells' assumption that the Jack Dolans of the world are necessarily happier than the Bobby Walkers -- and that working-class white men who earn a so-called honest living are somehow exempt from the clammy, nostalgic psychosis that pervades American life from top to bottom -- that seems like magical thinking.

On one level, Jack is just another of the working-class characters Hollywood has fetishized and/or patronized over the years, from Chaplin's "Modern Times" to "Norma Rae" to Clint Eastwood's "Gran Torino" -- a representative member of a group the culture-making elite fears, envies and yearns to identify with, all at the same time. But Jack has no idea how lucrative his skill set has become in the age of craft-chic. If his business is failing, it's only because he doesn't yet understand how many earnest college graduates on the other side of Boston (or in Brooklyn or Austin or San Francisco) are aching for his guidance. Maybe, like a famous carpenter of an earlier age, he should give up building houses and gather disciples.

Movies Our Picks The Company Men