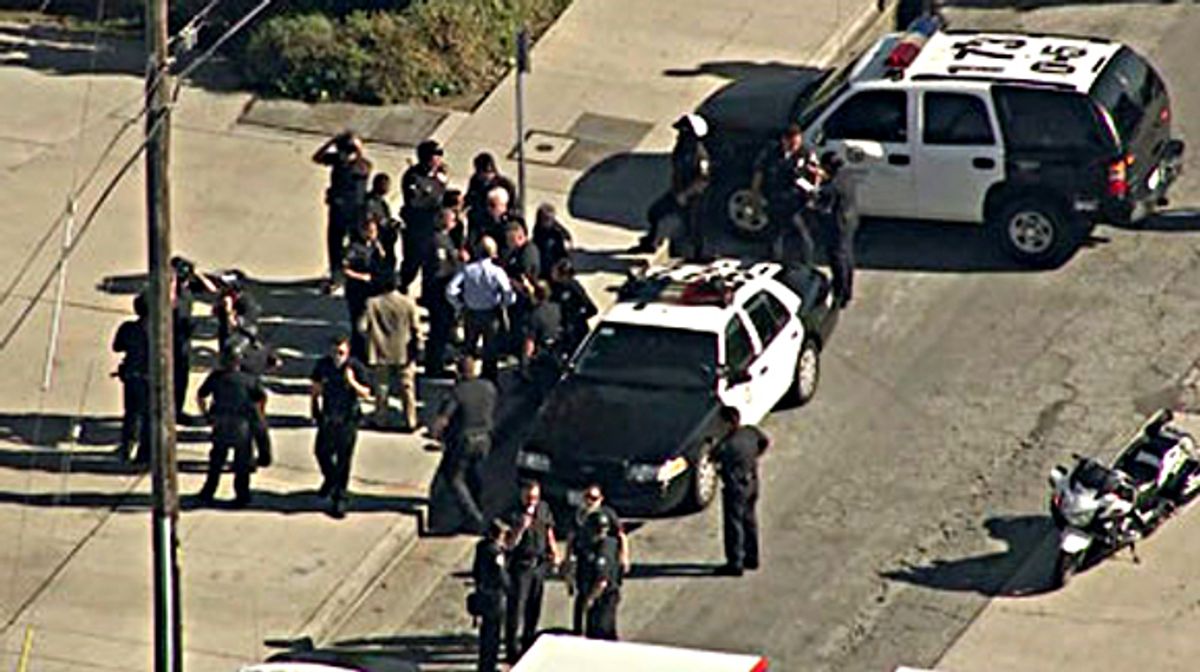 A wounded student is taken to an ambulance in Los Angeles.
--

A gun in a 10th-grader's backpack accidentally discharged when he dropped the bag, wounding two students at a Los Angeles high school, the campus principal said.

Gardena High School Principal Rudy Mendoza said the student dropped the bag as he walked between classes at midmorning. The boy who brought the gun was apprehended, Mendoza told The Associated Press.

Los Angeles Fire Department Capt. Jamie Moore said two victims were transported to a hospital, one in serious and one in critical condition.

Police initially reported that three people were shot and the shooter was at large.

Numerous law enforcement agencies responded to the shooting at the 2,400-student campus located in the city of Los Angeles adjacent to the city of Gardena.

Gardena police Lt. Steve Prendergast said a teacher called 911 at 10:41 a.m. and Gardena officers initially responded. The investigation was being turned over to Los Angeles city and school district police.

A handful of frantic parents rushed to the school after hearing about the shooting on the news. They paced nervously as they waited behind police tapes for word from their children.

"I've never heard of anything like this before," said Thomas Hill, whose 16-year-old and 18-year-old children attend the school. "You're going to have confrontations between kids but never this."

A mother who was waiting to hear from her 14-year-old son, Michael, said the school has a reputation for gang violence. Lupe Contreras said she has been trying to get her son out of the school.

Cynthia Cano, 15, said she was in a Mexican-American social studies class when an announcement was made that the school was in lockdown.

"We heard someone got shot. Everyone was freaking out a little," she said in a telephone interview from inside the campus.