America in the age of primitivism

Forget Democrats and Republicans. What America needs is two new parties: The Regressives and the Modernists 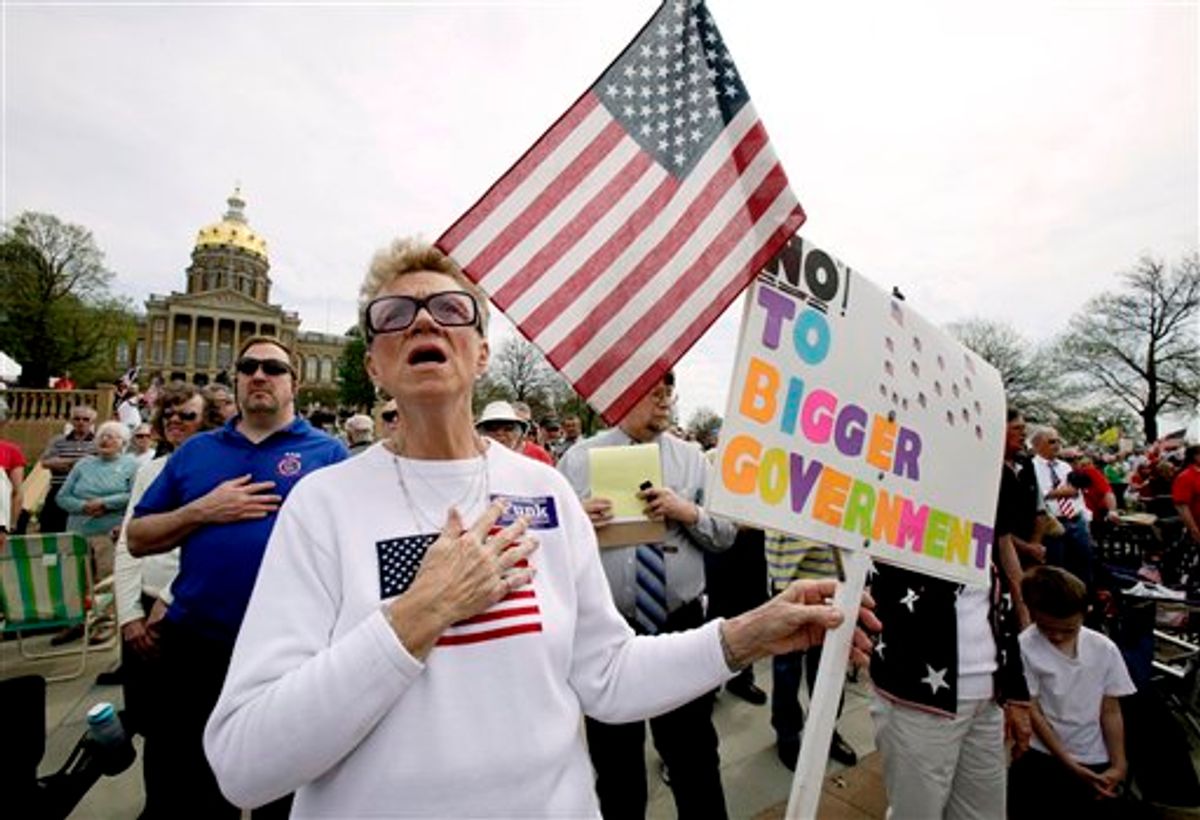 FILE - In this Thursday, April 15, 2010 file picture, Kay Hohler, of West Des Moines, Iowa, sings the national anthem before the start of a tea party rally on the steps of the Iowa Statehouse in Des Moines, Iowa. (AP Photo/Charlie Neibergall, File) (AP)
--

Is the 21st century a Dark Age, compared to the 20th? Is the culture of modernity and enlightenment slipping away, in the U.S. and elsewhere in the world? Is this really an age of neo-primitivism and superstition?

These questions can’t be dismissed by pointing to new technology. Medieval Europe had gadgets unknown to, or undeveloped by, the ancient Greeks and Romans -- moldboard ploughs, stirrups, advanced water-wheels, clocks. But few would disagree that the Europe of Charlemagne was more backward in its mindset, at least at the elite level, than the Rome of Augustus or the Alexandria of the Ptolemies.

Nor are the great gains of decolonization and personal liberation in recent decades necessarily incompatible with an intellectual and cultural Dark Age. After all, the fall of the Roman empire led to the emergence of many new kingdoms, nations and city-states, and slavery withered away by the end of the Middle Ages in Europe.

A case can be made that yes, we are indeed in a period of rising irrationalism. This irrationalism permeates our politics, from the right to the center to the left. And it has done so for some time.

We can understand our own regressive era by contrasting it with the period that preceded it. From the 19th century up until the 1970s, religion and premodern traditionalism were retreating before the advance of science and modernity, symbolized by large-scale, bureaucratic organizations in government and industry. The great ideological struggles of the twentieth century were between secular political religions that all claimed the sanction of science and glorified technology. While liberals and Marxists claimed the heritage of the eighteenth-century Enlightenment that produced the American and French revolutions, Mussolini and Hitler denounced Enlightenment ideals, but did not reject science. Nazi racism, like Soviet communism, was justified by appeals to pseudoscience. Totalitarianism is best understood as a perverted version of modernity.

Following the world wars, the U.S. and other liberal democracies rebuilt themselves as modern, technology-based, progressive societies that offered a higher standard of living to ordinary people than ever before. Gradually they liberalized their cultures, shedding the vestiges of priestly control, moved toward meritocracy away from aristocracy and dismantled racial caste systems. They devoted themselves to great civil engineering projects, like hydropower dams, nuclear power plants, continent-spanning highways and space exploration.

And then their people suddenly got tired of modernity and tried to crawl back into the past.

On the left, technological optimists were replaced by Rousseauian romantic primitivists. In the 1970s, Green guru Amory Lovins promulgated the gospel that “hard” sources of energy like nuclear power are bad and that called for a “soft path” based on hydropower, wind and solar energy. Other Green romantics decided that even hydropower is wicked, because it is generated by dams that despoil the prehuman landscape.

The New Left of the 1960s and 1970s longed for small, participatory communities, and rejected the giant organizations that New Deal liberals had taken pride in. In the 1980s and 1990s, new urbanists converted most progressives to their nostalgia for the ephemeral rail-and-trolley based towns of the late nineteenth century. GM foods, which New Deal liberals like Franklin Roosevelt and Lyndon Johnson would have embraced as a way to feed multitudes while sparing land for wilderness, were denounced by progressives who favored “heirloom” turkey and melons that the Pilgrims might have eaten. The increasingly reactionary American left, disenchanted with nuclear power plants and rockets and suburbs, longed to quit modernity and retire to a small town with an organic farmers’ market and an oompah band playing in the town park’s bandstand.

A similar intellectual regression to infantilism took place on the right in the late twentieth century. Between the 1930s and the 1970s, conservatism was defined by big business anti-statism, not by neotraditionalism. The Republican opponents of New Deal Democrats shared the New Dealers’ faith in science, technology and large-scale industry. They just wanted business to keep more of its prerogatives.

Contrast Eisenhower-era business conservatism with the religious right of Pat Robertson, Jerry Falwell and other evangelicals and fundamentalists in the late 20th and early 21st centuries. By 2000, an entire national party, the Republicans, was intimidated by religious zealots. No Republican presidential candidate could support legal abortion or criticize the pseudoscientific “creationist” alternative to evolutionary biology. Hatred of biotechnology, in the form of GM foods and human genetic engineering, was shared by the regressives of the left and the right. First a Democratic president, Jimmy Carter, then a Republican, George W. Bush, sought votes by claiming he had been “born again” with the help of Jesus, something that no president before the 1970s would have claimed.

Today optimism about science and technology is found chiefly on the libertarian right. At least somebody still defends nuclear energy and biotechnology. But in libertarian thought, science and technology are divorced from their modernist counterparts -- large-scale public and private organizations -- and wedded to ideals of small producers and unregulated markets that were obsolete by the middle of the nineteenth century. Libertarian thought is half-modern, at best. To its credit, it does not share the longing of many on the left for the Shire of Frodo the Hobbit or the nostalgia of most of the contemporary right for the Little House on the Prairie.

If there was a moment when the culture of enlightened modernity in the United States gave way to the sickly culture of romantic primitivism, it was when the movie “Star Wars” premiered in 1977. A child of the 1960s, I had grown up with the optimistic vision symbolized by “Star Trek,” according to which planets, as they developed technologically and politically, graduated to membership in the United Federation of Planets, a sort of galactic League of Nations or UN. When I first watched “Star Wars,” I was deeply shocked. The representatives of the advanced, scientific, galaxy-spanning organization were now the bad guys, and the heroes were positively medieval -- hereditary princes and princesses, wizards and ape-men. Aristocracy and tribalism were superior to bureaucracy. Technology was bad. Magic was good.

The Dark Age that began in the 1970s continues. Today’s conservatives, centrists, progressives -- most look like regressives, by the standards of mid-20th century America. Tea Party conservatives argue that federal prohibitions on child labor are unconstitutional, that the Fourteenth Amendment should be repealed, and that the Confederates were right about states, rights. Religious conservatives, having lost some of their political power, continue to their fight against Darwinism. Fiscally conservative “centrists” in Washington share an obsession with balanced budgets that would have seemed irrational and primitive not only to Keynes but also to the 19th-century British founder of The Economist, Walter Bagehot. And while there is a dwindling remnant of modernity-minded New Deal social democrats, most of the energy on the left is found on the nostalgic farmers’market/ train-and-trolley wing of the white upper middle class.

Here’s an idea. America needs to have a neomodernist party to oppose the reigning primitivists of the right, left and center. Let everyone who opposes abortion, wants to ban GM foods and nuclear energy, hates cars and trucks and planes and loves trains and trolleys, seeks to ban suburbia, despises consumerism, and/or thinks Darwin was a fraud join the Regressive Party. Those of us who believe that the real, if exaggerated, dangers of technology, big government, big business and big labor are outweighed by their benefits can join the Modernist Party. While the Regressives secede from reality and try to build their premodern utopias on their reservations, the Modernists can resume the work of building a secular, technological, prosperous, and relatively egalitarian civilization, after a half-century detour into a Dark Age.