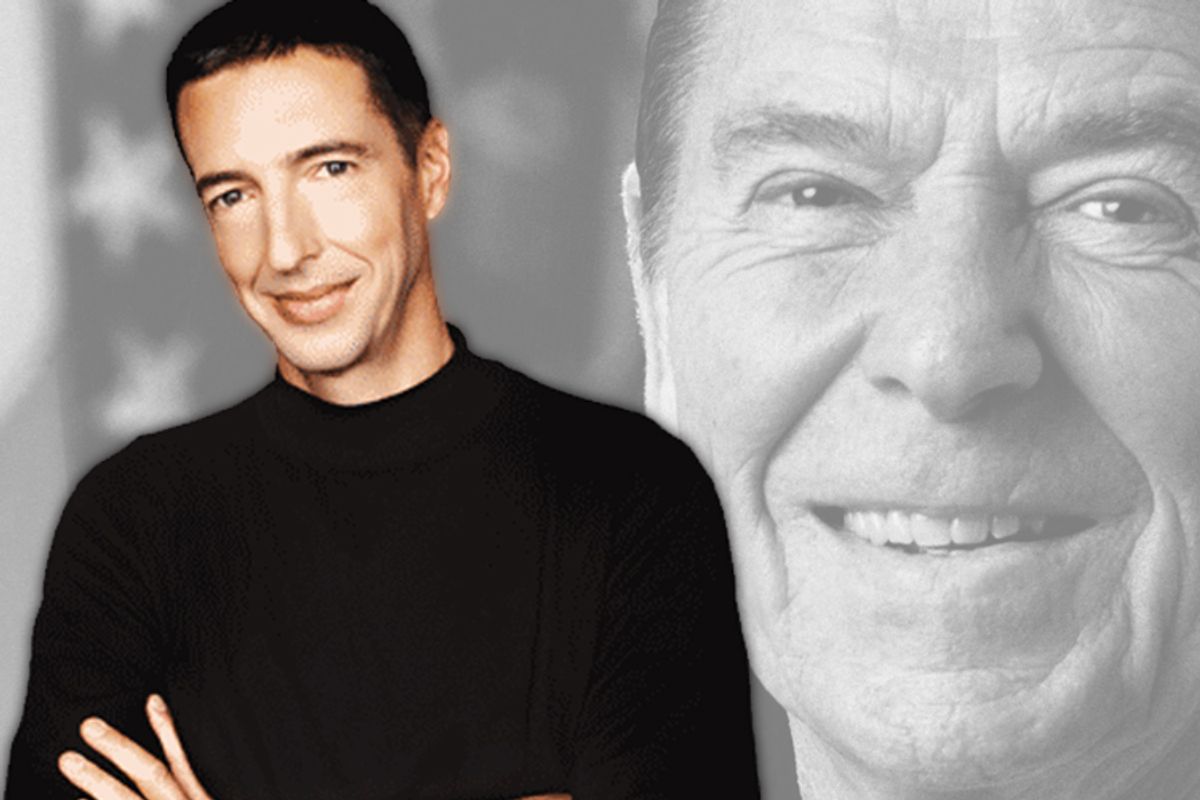 Seven years after his death, the name of Ronald Reagan is still capable of provoking serious arguments -- including within his own family.

The former president’s son, Ron Reagan, has just released "My Father at 100," a book about his father’s life. (The younger Reagan resists calling it a memoir.) The book’s revelation that Ron now believes his father had Alzheimer’s disease while in office has already elicited a furious response from Michael Reagan, the son adopted by Ronald Reagan and his first wife, Jane Wyman.

Michael Reagan has not only denied the Alzheimer’s-while-in-office suggestion; he has accused his brother of wanting to "sell out his father to sell books" and suggested, via Twitter, that people need to "pray" for Ron. But in an interview with Salon on Tuesday, Ron Reagan showed no signs of backing down from the fight.

"He seems to be dedicated to selling more of my books," he said about Michael. "I think he has made this a much bigger story than it would have been if he had just kept his mouth shut."

Do the two sons talk?

"He hasn’t really spoken to anybody in my family for quite some time, so far as I know. I was quite surprised to see that tweet that he sent out about me being an embarrassment to my father and now an embarrassment to my mother. Besides being just an unfortunate thing to say, he really shimmied way out on the end of a limb there. Does he expect that my mother is going to agree with that?"

Lest the question dangle unanswered, Ron filled in the gaps:

"I just spoke with her last night, and I knew I was going to be doing interviews, and I said: You know in light of all this stuff, and Mike’s comments, I’m sure I’m going to be asked, What did you think of the book? And she said to me: ‘You tell them that I read it, I loved it, it made me cry, and I’m very proud of you.’"

Contemporary concerns about President Reagan’s age and health came most sharply into focus after his infamous first presidential debate with Walter Mondale in 1984, during which Reagan appeared uncertain and occasionally confused. His son writes that, as he watched, he "began to experience the nausea of a bad dream coming true."

But did Ron Reagan see other signs, in private, of the beginnings of his father’s decline?

"There were moments, occasional moments," he said. "I’m his son, so I’m hypersensitive to any kind of change. I certainly never thought to myself, 'Oh my God, he must have Alzheimer's.' But there were private moments where you would just kind of think, 'Hmm ... [there was] just a little hesitation there that I’m not used to.'"

Ron believes some of the negative responses to the book are rooted in a fundamental misunderstanding about the condition that afflicts millions of Americans.

"One of the reasons why people have got their noses out of joint, is that I think people confuse Alzheimer’s, the disease, with dementia, the symptom that goes along with later-stage Alzheimer’s. I made clear in the book that I never saw any signs of dementia when he was in office."

Ronald Reagan had a relatively short post-presidential public life. In 1994, he wrote an open letter to the American people acknowledging that he had Alzheimer’s -- and almost never appeared in public thereafter. Was the public admission a difficult one for him to make?

"The disease had taken a toll by that time," Ron replied. "To my knowledge, he didn’t spend a lot of time brooding about it or anything like that. I think he kind of let go after that, after he received his diagnosis.

"My mother didn’t tell him right away. She wisely decided: ‘If I tell him early, it’s going to lead to depression. I’ll tell him when he has to know.' And so that’s what she did. And after that, he gave himself over to the disease and the dips and plateaus came a little bit more frequently."

In the earlier stages of his decline, was Reagan still able to see friends or political acquaintances -- anyone, basically, beyond his family?

"Up to a point," says Ron. "But later my mother -- in order to protect his privacy and his dignity and to leave people with the memory of him as he was -- sort of cut off contact with friends. People would come to the house and visit with her, but he had retired to a bedroom by that time. She was not of a mind to bring people back to stare at him, or something like that."

The experience of growing up as the child of a president is one that few Americans have had, or will ever have. Malia and Sasha Obama are significantly younger than Reagan was when he stood in their shoes (he was 22 when his father was elected in 1980), but does he have any advice for the current first daughters?