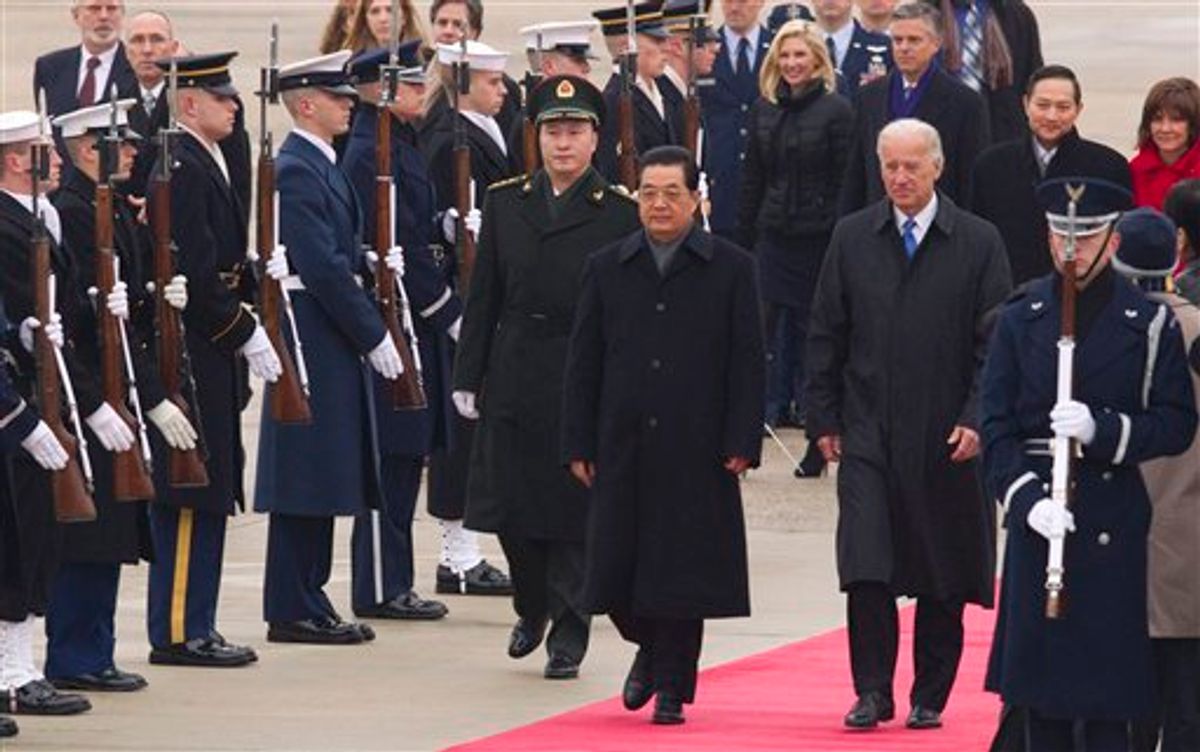 Chinese President Hu Jintao arrived Tuesday as President Barack Obama prepared to welcome him with a careful mix of firmness and warmth befitting the leader of a nation that is at once the largest U.S. rival and most important potential partner.

Tensions over currency and trade policies, a search for common ground on national security, and U.S. finger wagging over Chinese internal governance and human rights will dominate the visit.

But any edge in the talks will be softened by an unusual private White House dinner Tuesday night between Hu and Obama, and a high-pomp state dinner Wednesday with all the trappings afforded to a world power.

For Hu, that would be an accomplishment in itself. The U.S. has stiffened its stance against China after initial entreaties from the Obama administration, and any images of a friendly welcome in the U.S. could serve to polish Hu's image at home and to soften the American public's suspicions about China.

Hu received red carpet treatment upon landing Tuesday afternoon at a wet Andrews Air Force Base, where he was greeted by Vice President Joe Biden and a military color guard.

For Obama, the visit represents an opportunity to carry out the engagement he promised would be a trademark of his foreign policy. But Obama is also under pressure to show resolve as a range of interest groups -- from business leaders to human rights advocates -- press the administration to stand up to Beijing.

The White House on Tuesday stressed that Obama did not intend to avoid difficult subjects.

A key moment will come Wednesday when Obama and Hu appear at a brief news conference. The two will take four questions -- two from U.S. journalists and two from Chinese reporters. The White House insisted that the two leaders face reporters.

In China, Hu's public appearances are always under controlled circumstances that don't lend themselves to spontaneity. Hu did take questions at a 2005 news conference with President George W. Bush in Beijing, but he refused to do so when Obama visited in 2009.

When it comes to economic discussions, U.S. companies have been longtime critics of Chinese policies that kept its currency low relative to the dollar. A low-priced yuan makes Chinese products cheaper in the U.S. and U.S. products more expensive in China.

Two senators, Democrat Sherrod Brown of Ohio and Republican Olympia Snowe of Maine, sent a letter Tuesday to Treasury Secretary Timothy Geithner informing him that they plan to introduce legislation that would penalize China if it continues to manipulate its currency.

But with the yuan rising 3.5 percent against the dollar since June, the currency dispute has in part given way to U.S. complaints about theft of intellectual property and barriers to Chinese contracts for U.S. firms.

In a letter to Obama on Tuesday, a coalition of financial organizations urged the president to prod the Chinese to open up its financial services sector to greater competition. U.S. Chamber of Commerce President Thomas Donohue said the business community wants to make sure the U.S. continues a trend to expand exports to China and added that he worries China is showing favoritism to domestic industries.

"We're going to press to make sure that we have a fair opportunity for American exports which will create jobs," Donohue said.

On security, Hu's visit comes in the aftermath of a four-day visit to China by Defense Secretary Robert Gates aimed at healing rifts between the two militaries. U.S. officials have complained about China's secrecy in its pursuit of conventional weapons. The Chinese had earlier pulled out of military talks and withheld an earlier invitation to Gates in protest of a nearly $6.4 billion arms sale to China's rival, Taiwan.

The U.S. considers China a vital player in attempts to contain North Korean aggression against South Korea and its development of a nuclear weapon. The U.S. also needs Chinese support to increase pressure on Iran, as China is a U.N. Security Council member.

Among the security issues that remain unresolved between the two countries are Chinese objections to the U.S. view that it has the right to sail its ships in waters that China claims as restricted.

Perhaps the most confrontational aspect of the relationship is the U.S. view that China engages in human rights violations. Last week, Secretary of State Hillary Clinton bluntly called for the release of jailed Chinese dissidents, including Nobel Peace Prize winner Liu Xiaobo, who was prevented from attending the Dec. 10 prize ceremony in the Norwegian capital.

The White House on Tuesday seemed eager to dispel any suggestion that Obama would not press Hu on human rights.

"That is a topic of some significance that the two leaders will talk about," Gibbs said. "We will continue to have difficult conversations . that had to be had with China."