Dr. Kermit Gosnell got rich off of his \"house of horrors\" clinic -- now he faces eight counts of murder 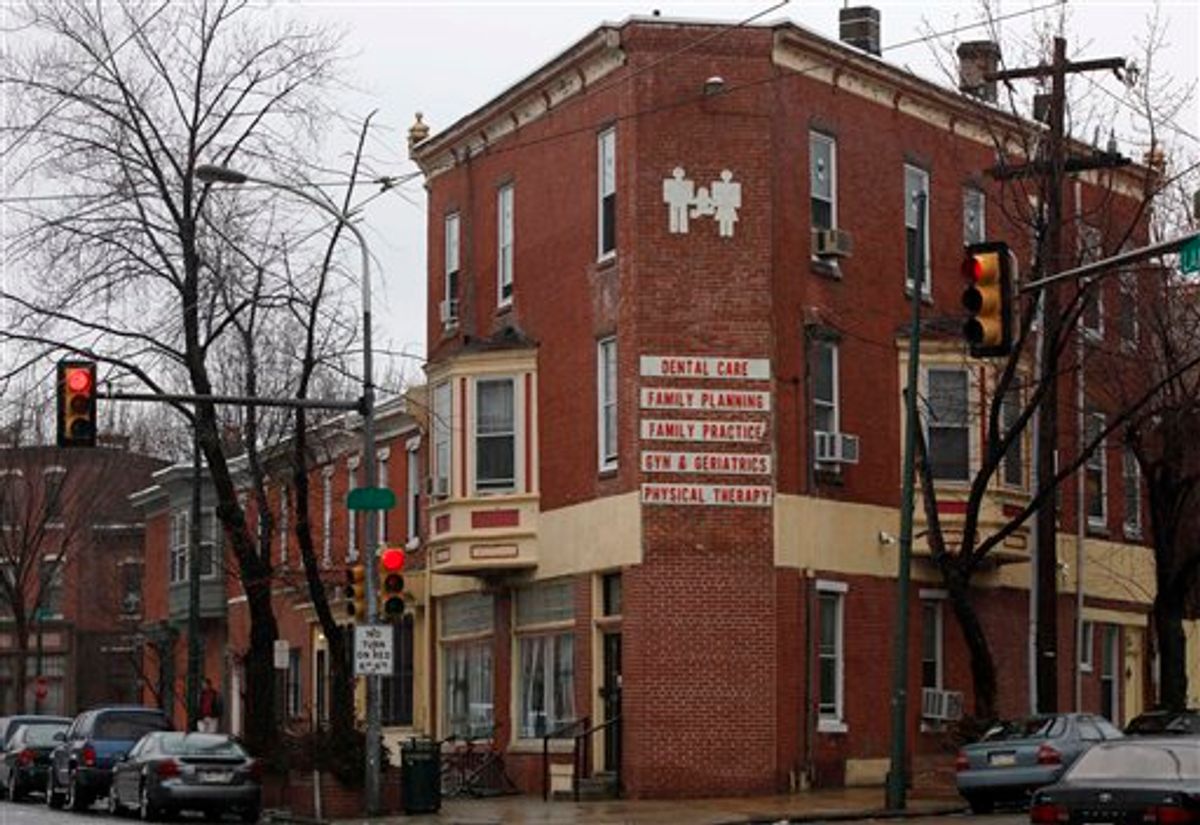 FILE - This Feb. 23, 2010 file photo, shows the Women's Medical Society in Philadelphia. Abortion doctor Kermit Gosnell, who catered to minorities, immigrants and poor women at the Women's Medical Society, was charged Wednesday Jan. 19, 2011, with eight counts of murder in the deaths of a patient and seven babies who were born alive and then killed with scissors, prosecutors said Wednesday. (AP Photo/Matt Rourke, File) (AP)
--

Kermit Gosnell performed dozens of illegal, late-term abortions a day -- as many as he could at up to $3,000 per procedure. After inducing labor and waiting for the late hours of the night, Dr. Gosnell would deliver the babies premature, briefly alive, and thrust scissors into the backs of their necks in order to sever their spinal cords. For no apparent reason, bags of dead fetuses littered his clinic, and jars containing severed feet lined his shelves.

Today, prosecutors in the Philadelphia District Attorney's Office filed eight charges of murder against Gosnell, his wife and eight other suspects. Seven of those charges are for living babies that Gosnell allegedly murdered with scissors. The eighth is for a mother who died after receiving a lethal dose of anesthesia in Gosnell's Women's Health Society.

The case drew national media attention in February 2010 after the Pennsylvania Department of State's Board of Medicine suspended Gosnell's license and shut down the West Philadelphia-based clinic due to "deplorable and unsanitary" conditions. Those conditions included "blood on the floor and parts of aborted fetuses in jars."

As Salon's Kate Harding reported, the doctor had instructed unlicensed and untrained assistants to administer medication and perform procedures. Gosnell reused unsanitary instruments and even enlisted the help of a high school student for procedures. The utter horror that unfolded in Gosnell's clinic, Harding explained, illustrates the importance of "legal, high-quality abortion care."

According to District Attorney Seth Williams, Gosnell treated mostly immigrant and low-income patients from across the mid-Atlantic region in his clinic. He did, however, also keep a cleaner area of the clinic for white women from the suburbs.

If anything, the Gosnell case illustrates the pressing need for better regulation in women's health. Over the course of his 30-year career, patients filed at least 46 malpractice suits against Gosnell. Many of them -- including the death of one 22-year-old mother -- involved perforated uteruses, which Gosnell would routinely stitch up without informing the women. Meanwhile, regulators ignored countless complaints against Gosnell who was not board-certified in obstetrics-gynecology.

The illegal abortion business made Gosnell a rich man. He made $1.8 million one year, according to the district attorney. Prosecutors also found $240,000 in cash during a search of Gosnell's home.

The district attorney has publicly blamed the state's lack of oversight for allowing such a  murderous practice to thrive.

Gosnell blames no one. He says he's innocent.