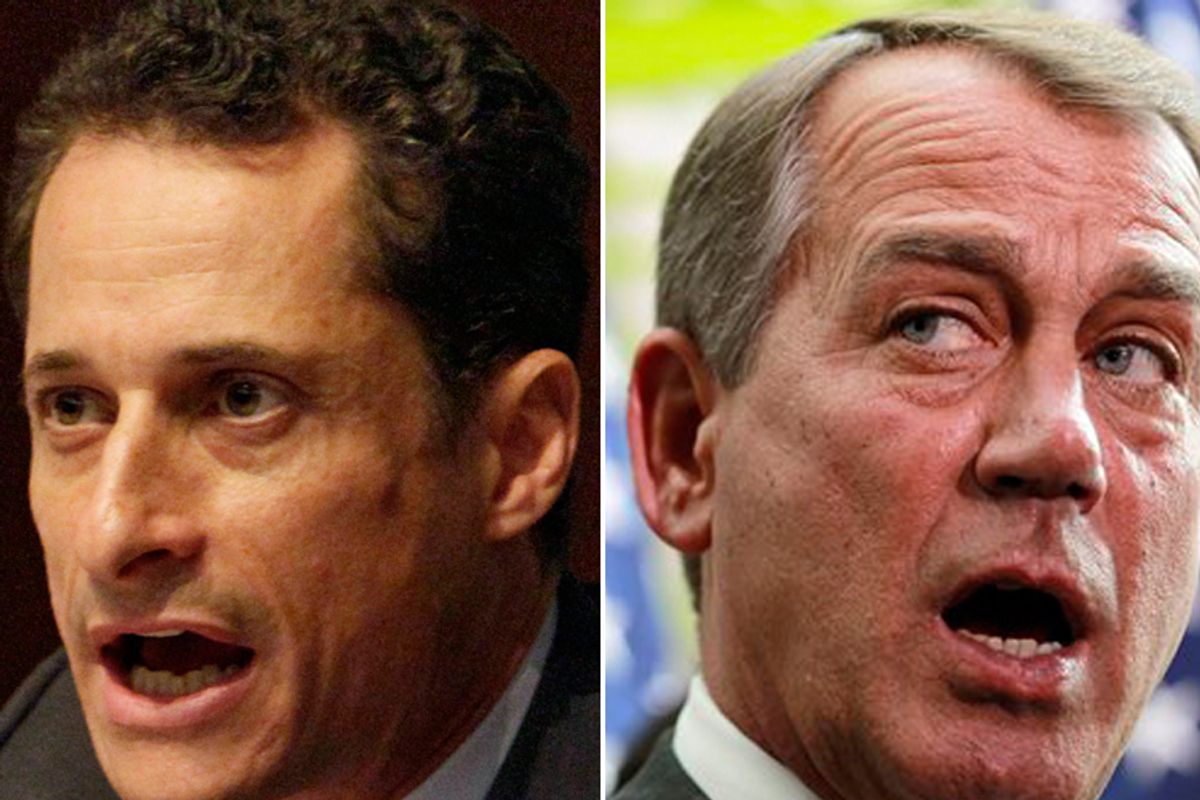 [Update 2: Repeal passed! 245-189. Three Democrats voted to repeal: Dan Boren of Oklahoma, Mike McIntyre of North Carolina, and Mike Ross of Arkansas. Even Heath Shuler voted against repeal. As Suzy Khimm notes, this means "10 House Democrats who voted against the original health reform bill refused to repeal it today. Now I guess the House will move on to repealing the president, and the Senate.]

Here are some stray impressions from watching hours of the House of Representatives debating the inevitable symbolic "repeal" of the Affordable Care Act.

Republican Dave Camp argued that we have to cut the government down like a tree that's in the way. Rep. Sander Levin seemed sleepy. Charlie Rangel seemed to be reassuring people watching the debate at home that their benefits won't go away after the GOP votes to "repeal" Obamacare.

Paraphrase of the statement of Sam Johnson, R-Texas: "I rise in support of freedom, and America, and free enterprise, and America. As you know, under Obamacare, the federal government forces freedom-loving Americans to hand over their hard-earned cash, to the government. Liberty liberty freedom."

Some representatives are still using the "job killer" talking point, but others switched it to the more sensitive "job destroyer."

Rep. Kevin Brady brought out that stupid chart that shows how complicated the reform bill is. Only this time he said the chart only covers one-third of the new government agencies that will socialize your medicine. He should've brought out three charts.

Democrat Earl Blumenauer, wearing a neon green clown bow tie and oversize bicycle lapel pin, bemoaned the unseriousness of the entire debate. Republican Charles Boustany said he gave a guy some sort of surgery a couple years ago that he needed, and then a few years later the guy died, and he wouldn't have given the guy the surgery if there had been Obamacare. I think that was the idea.

Aaron Schock warns that you -- yes, you! -- are about to lose your insurance. "Think the DMV, or FEMA, for your healthcare plan." What, the FEMA that's setting up prison camps everywhere, secretly? Seems like those are run pretty efficiently.

Anthony Weiner was there early in the debate, being all feisty. He suggested that viewers get drunk, in the middle of the day. (Why not, the government will just seize a job-creator's wealth to pay for your liver transplant!)

"You know, I want to advise people watching at home who are playing that now popular drinking game 'you take a shot whenever the Republicans say something that's not true,'" said Weiner. "Please assign a designated driver. This is going to be a long afternoon."

At 4:15, Speaker Boehner took the floor. He used his grown-up statesman voice. We all agree, he said, that "this reform needs improving." And: "If we agree that this law needs improving, why would we keep it on the books?" What a very good point. Whenever I want to improve something, I immediately throw it out. This soup could use some salt, I think to myself when cooking dinner, I'd better dump it out and start again.

California Republican Devin Nunes summed up the GOP argument when he said, regarding the bill's cost control provisions: "They cut funding from what is already the nation's largest unfunded liability, Medicare." (He added that Democrats are guilty of "anti-capitalist hate speech.") So, cutting funding from the unfunded liability is good, right? I mean, if you're not going to fund it, cut it! But no, apparently that is bad. Rep. John Shimkus made a similarly incoherent point earlier, as did many, many other Republicans. This government-run healthcare plan is bad because we are broke and it makes cuts in our broke government-funded healthcare plan.

The entirely pointless vote will happen at around 5:30. I'll let you know if there are any surprises.

Update: Oh, here's Michele Bachmann for a minute-and-a-half. Her entire statement was delivered in like two breaths, and also she literally said that she was going to "repeal the president."

A rough transcript: "Obamacare as we know is the crown jewel of socialism it is socialized medicine [breath] the American people spoke soundly and clearly at the ballot box in November and they said to us Mr Speaker in no uncertain terms [breath] repeal. This. Bill. And so today this body will cast a vote to repeal Obamacare. And to those across the United States who think this may be a symbolic act, we have a message for them: This is not symbolic, this is why we were sent here, and we will not stop until we repeal a president and put a president in the position of the White House who will repeal this bill until we repeal the current Senate put in a Senate that will listen to the American people and repeal this bill. Because what has been the result, Mr. Speaker, it has been this: It's been job loss, it's been increases on costs to the American people, I've seen everything from 26% increases on health insurance, to 45% increases on health insurance. This. Will. Break the bank. And we won't let that happen to our country. So make no mistake, Mr. Speaker, we are here to stay, and out resolve is firm. We will continue this fight until Obamacare is no longer the law of the land, and until we can actually pass reform that will cut the costs of healthcare, and I yield back."