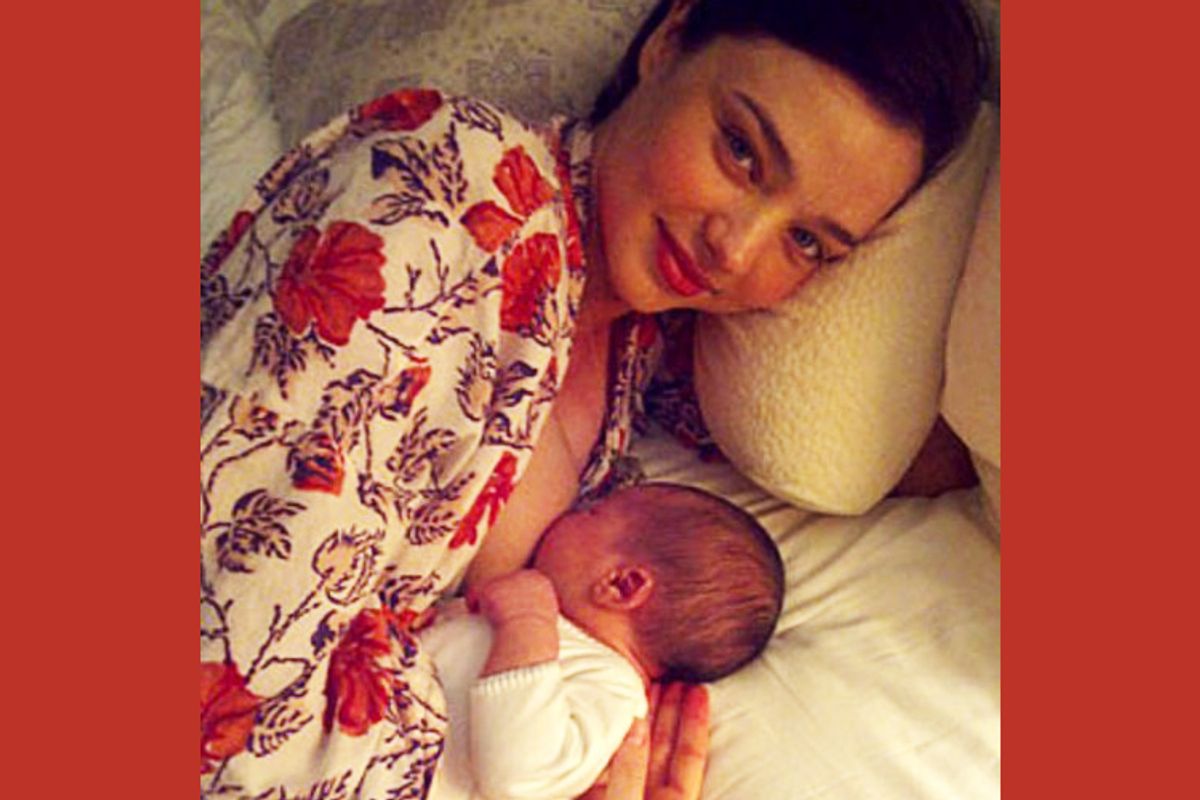 You don't have to look too far on the Internet to find images of Miranda Kerr showing some skin. She is, after all, a Victoria's Secret model.  But a fairly modest image of domestic bliss, shot by husband Orlando Bloom, is rapidly becoming the most buzzed-about image of the Australian beauty. In it, she smiles sleepily in bed, her robe partially open -- while infant son Flynn nuzzles contentedly at her breast.

That's right -- these things aren't just for filling out sweaters, slipping out at awards shows, and good times with close friends.  Though it's easy to forget in our cleavage-obsessed culture, breasts are what put the mamm in mammals. But while Kim Kardashian's bralessness is headline-making news and Olivia Munn's assets are the highlight of her talk show appearances, a woman using her rack for something other than an attention-getting accessory is often met with everything from discomfort to outright hostility. In 2007, Bill Maher famously ranted that "breast-feeding is an intimate act, and I don't want to watch strangers performing intimate acts." Earlier this month, Facebook found itself in the midst of yet another controversy regarding its absurd knee-jerk response to breast-feeding photos when it deleted -- twice -- the page for the Leaky B@@b support group for violation of terms of service. And the public appetite for stories about Natalie Portman's pregnancy or John Travolta's new baby or who looks like she's sporting a baby bump this week is damn near insatiable. But the beauty of breasts and their usefulness in parenting rarely cross paths in the public eye.

How lovely then not just that Kerr posted a blissful photo that sweetly evokes those magical early bonding days with a baby, but that the picture has been nonchalantly picked up by major entertainment news outlets with barely a hint of squeamishness. Both People and OK! posted the photo, along with Kerr's message from her blog that "I gave birth to him naturally; without any pain medication and it was a long, arduous and difficult labour, but Orlando was with me the whole time supporting and guiding me through it."

It wouldn't be the Internet if a few people didn't have negative opinions, summed with the classic, "I would NEVER breastfeed in public...we are humans not animals" and " it's a private thing...so let's keep it private!" Yet the outpouring of huzzahs for the beautiful photo, Kerr's honesty about drug-free childbirth and for the mainstream media for having the gumption to carry it suggests that maybe we're maturing culturally about breasts. As one reader gushed, "Wonderful to see a breastfeeding mother in People!"

It's true, breasts can be eye candy and baby food. They can fill out a Victoria's Secret push-up and inspire other nursing mothers. Yay, multitasking! Our bodies -- even the sexy parts -- aren't designed for just one purpose all the time, and the idea that breast-feeding was something to be hidden away from the eyes of the world was always a lot of hooey anyway. And if Miranda Kerr can proudly demonstrate that so beautifully, with such enthusiastic support, maybe there's hope someday for even Bill Maher.