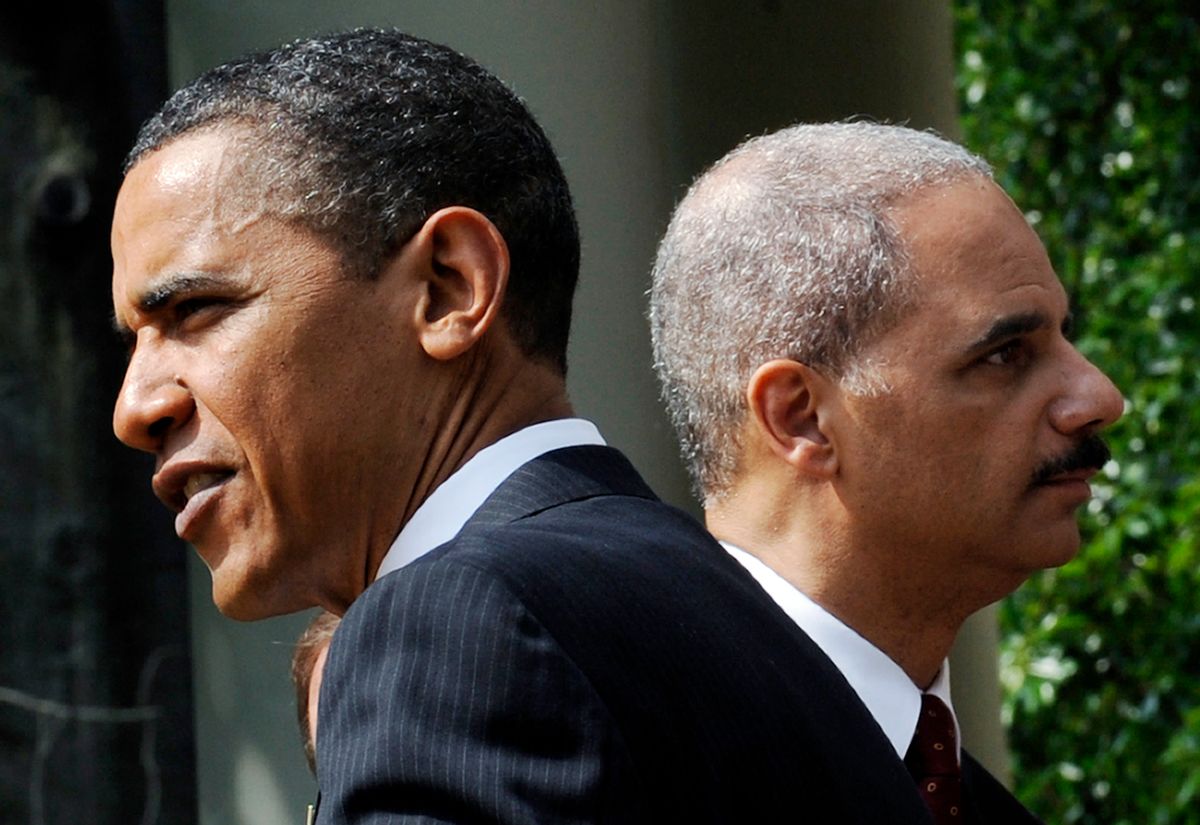 President Barack Obama and Attorney General Eric Holder in the Rose Garden of the White House in Washington while meeting with the 2010 National Association of Police Organizations award winners, Friday, May 14, 2010. (AP Photo/Susan Walsh) (Associated Press)
--

The Obama administration has issued new guidance on use of the Miranda warning in interrogations of terrorism suspects, potentially chipping away at the rule that bars the government from using information in court if it was gathered before a suspect was informed of his right to remain silent and to an attorney.

But the Department of Justice is refusing to publicly release the guidance, with a spokesman describing it in an interview as an "internal document." So we don't know the administration's exact interpretation of Miranda, even though it may have significantly reshaped the way terrorism interrogations are conducted.

The Miranda warning, which was created by a 1966 Supreme Court decision of that name, requires that police interrogators inform a criminal suspect of his rights before an interrogation. If the police fail to do this, statements made during the interrogation are not admissible in court. The rule, which was designed to prevent coercive interrogations, is rooted in the Fifth Amendment right against self-incrimination and the Constitution's due process clause.

Beginning after the failed Christmas day bombing in 2009, renewed attention centered on Miranda and the Obama Justice Department's use of the so-called "public safety exception" to the rule. The suspects in the Christmas case and the subsequent Times Square bombing case were interrogated for up to four hours before agents informed them of their Miranda rights. Attorney General Eric Holder cited the public safety exception to explain that delay; several law professors told me at the time that the DOJ appeared to be using an expanded interpretation of the exception.

The public safety exception was created by the Supreme Court in the 1984 Quarles case, in which police had asked a suspect where he hid a gun in a grocery store before reading him the Miranda warning. The Supreme Court allowed that statement to be used at trial, citing a "situation where concern for public safety must be paramount." One former federal prosecutor and FBI agent told me last year that questioning under the exception typically lasted a few minutes ("Where's the gun?"), not three to four hours as in the Times Square case.

Asked about the administration's current stance on Miranda, Justice Department spokesman Dean Boyd sent along this statement about the new guidance that was sent to "relevant agencies":

As demonstrated most recently after the attempted terrorist bombings last Christmas and in Times Square last spring, law enforcement has the ability to question suspected terrorists without immediately providing Miranda warnings when the interrogation is reasonably prompted by immediate concern for the safety of the public or the agents. Because of the complexity of the threat posed by terrorist organizations and the nature of their attacks -- which can include multiple accomplices and interconnected plots -- we have formalized guidance that outlines the appropriate use of the well-established public safety exception to providing Miranda rights. To ensure that law enforcement is aware of the flexibility that the law gives them in these circumstances, the guidance has been distributed to relevant agencies.

Again, it's hard to assess the administration's interpretation of Miranda without seeing the exact wording guidance. There's also the matter of how the policy is applied in future cases, says Stephen Vladeck, a law professor at American University who tracks legal issues in terrorism cases.

"In the classic public safety case, there are exceptional facts, where one kidnapping suspect might know where his accomplice is hiding a kidnapee," he says. "What's different here is the mentality that every terrorism case is the exception. The entire analytical justification for the public safety exception is that it's only applicable in the most extreme factual circumstances. Not every terrorism case fits that."

Last May, shortly after the failed Times Square bombing, Holder made the rounds on the Sunday shows and said the administration would seek congressional action to "make our public safety exception more flexible." At that time, Republicans were loudly arguing that Miranda should not be used in terrorism cases.

Since May, though, there has been virtually no public talk about a legislative push from congressional leaders or the administration. Instead, there is the new DOJ guidance, which is being kept secret.