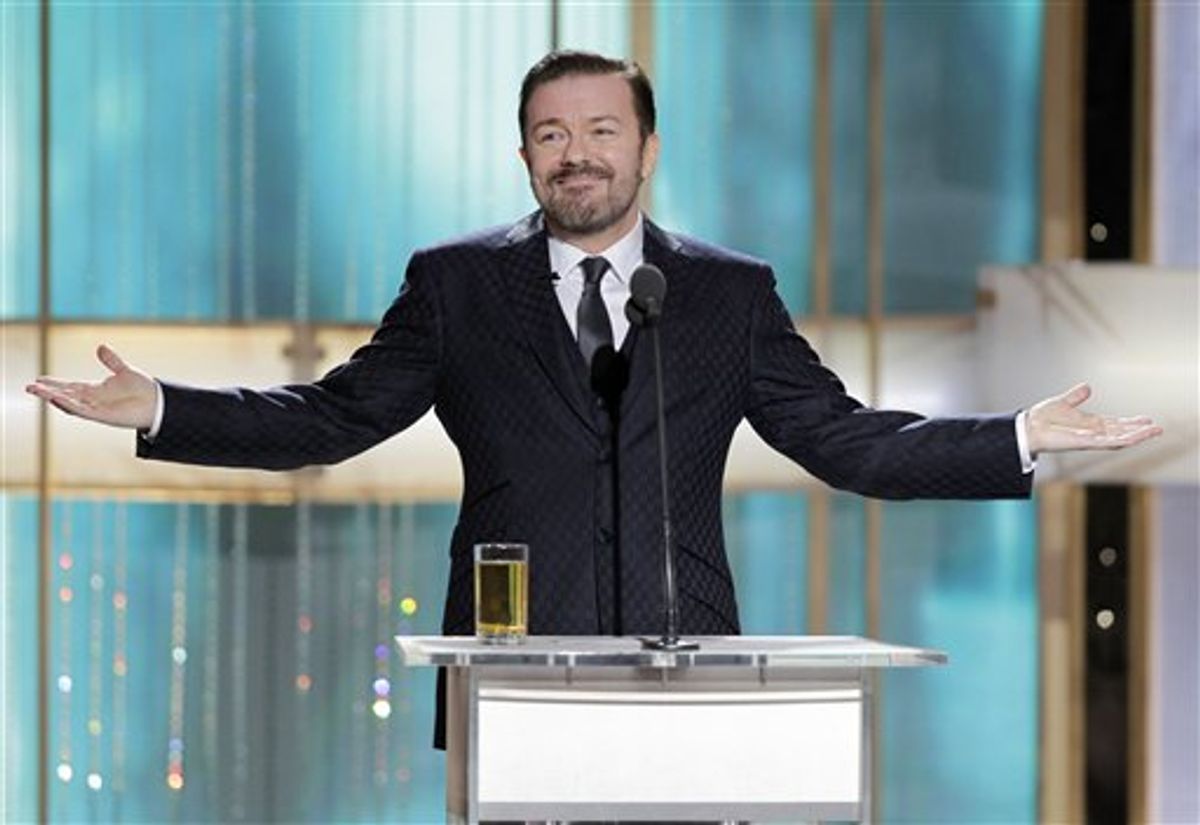 The British comedian was brash, profane and cruelly funny at Sunday's Golden Globes, delivering his trademark humor as promised for the Hollywood Foreign Press Association in his second go-round as host of the ceremony that has "butt-talking" appearances by Jim Carrey and Jack Nicholson in its history.

At its heart, pairing the right host with the right awards show is a delicate form of matchmaking. The relationship should be unpredictable but not self-destructive, capturing TV viewers and Nielsen ratings without alienating the stars who come to be celebrated.

More than a few brave hosts have discovered how daunting the brief affair can be. That includes David Letterman, who has yet to shed memories of his bumpy 1995 Oscar gig that included an oddball phonetics bit mocking the names of Uma Thurman and Oprah Winfrey.

"Ricky Gervais was the host of the (Globes) show -- very funny guy," Letterman said on his late-night CBS show Monday. "But there's already talk that he'll never be invited back, and I say, 'Hey, welcome to the club.'"

At the 2008 Emmy Awards, there was a misguided attempt to pay homage to reality TV by letting five of the genre's hosts, including Heidi Klum of "Project Runway" and Jeff Probst of "Survivor," share the emcee job. Their dull joint act bombed, with presenter Jimmy Kimmel dryly complimenting them for being "sufficient."

Gervais was anything but boring. Unlike last year, however, when he slyly mocked actors as a class by calling them "the most important people on the planet," he turned very personal.

His targets Sunday included Bruce Willis, the stars of "Sex and the City" and Robert Downey Jr., who retorted onstage, jokingly or not, "Aside from the fact that it's been hugely mean-spirited, with mildly sinister undertones, I'd say the vibe of the show is pretty good so far, wouldn't you?"

One of the sharper jabs was at the Golden Globes' own expense: Gervais joked about a lawsuit by a former publicist for the HFPA that alleges the group engages in payola schemes for nominations and awards.

Gervais initially struck a brave tone on his website, saying he "enjoyed the Globes more this year. I think I had better gags." He also rejected as "rubbish" the rumor that he was censored as the show progressed. But on Tuesday, he admitted verging on self-doubt in the face of criticism.

"Thanks to the twitterverse, the blogosphere, all the journos and the coolest stars for coming to my rescue," he said in a posting at rickygervais.com. "It was heartwarming to realise I wasn't losing my mind. Some reactions nearly had me believing I'd gone too far too. Nearly."

Among his boosters was Elizabeth Banks ("30 Rock," "W"), who tweeted, "I thought RG was hilarious. Actors can take it. We have thick skins."

"Have you noticed that nobody remembers the winners of the Golden Globes -- but they do remember Ricky Gervais," Regis Philbin said Tuesday on his daytime talk show (on which he also announced his retirement).

The HFPA largely stood by its man, issuing the merest squeak of official displeasure over Gervais zingers, which included, "It's going to be a night of partying and heavy drinking. Or as Charlie Sheen calls it -- breakfast." HFPA President Philip Berk also told The Hollywood Reporter that Gervais was not warned about his performance or kept off-air during the broadcast.

"We loved the show. It was a lot of fun and obviously has a lot of people talking," the association said in a statement, noting that Gervais is expected to deliver "in your face, sometimes outrageous material. Certainly, in this case, he pushed the envelope and occasionally went too far."

But the group, which said "overall" it was pleased and called the show "among the best we've ever had," said it hadn't made a decision about whether Gervais would be invited back next year. Also facing the HFPA in the months ahead is a decision on who will broadcast the Globes next year. Its contract with NBC expired with this year's show.

Meanwhile, the producers gearing up for the Jan. 25 Oscar nominations announcement and Feb. 27 Academy Awards broadcast have signaled plans for a far different ceremony.

Choosing co-hosts who are respected actors, non-comedians and include a potential nominee -- Franco for "127 Hours" -- makes a decorous evening likely for the film awards that remain Hollywood's main self-congratulatory event.

"We have the reputation of the predominant American art form to protect and spread the message to the world," said Don Mischer, who is producing the ceremony with Bruce Cohen. "This will be watched by billions of people when you put it all together, so you do feel that sense of responsibility."

Filmmaker Judd Apatow ("Knocked Up," "Superbad"), who will host the Producers Guild of America Awards on Jan. 22, took a friendly jab at Gervais online and started a Twitter campaign to gather better jokes for his gig.

"I thought Joan Rivers did a wonderful job hosting the Golden Globes tonight," Apatow joked in a post-show tweet. "Ricky Gervais should do an episode of Extras where he hosts the Golden Globes and is out of tune."

Calling "mean too lazy for RG," Apatow invited followers to post jokes better than Gervais' and promised the "winners" a shout-out at the non-televised awards show. The entries, he tweeted later, demonstrate that "it's hard to be funny and not vicious. Steve Martin is king."

Whether Gervais gets a third call to headline the Globes may be determined more by a number than his one-liners. The broadcast attracted nearly 17 million viewers, according to "fast-national" Nielsen figures released Monday, and was NBC's most-watched prime-time entertainment telecast among advertiser-favored young adult viewers since last year's Globes.