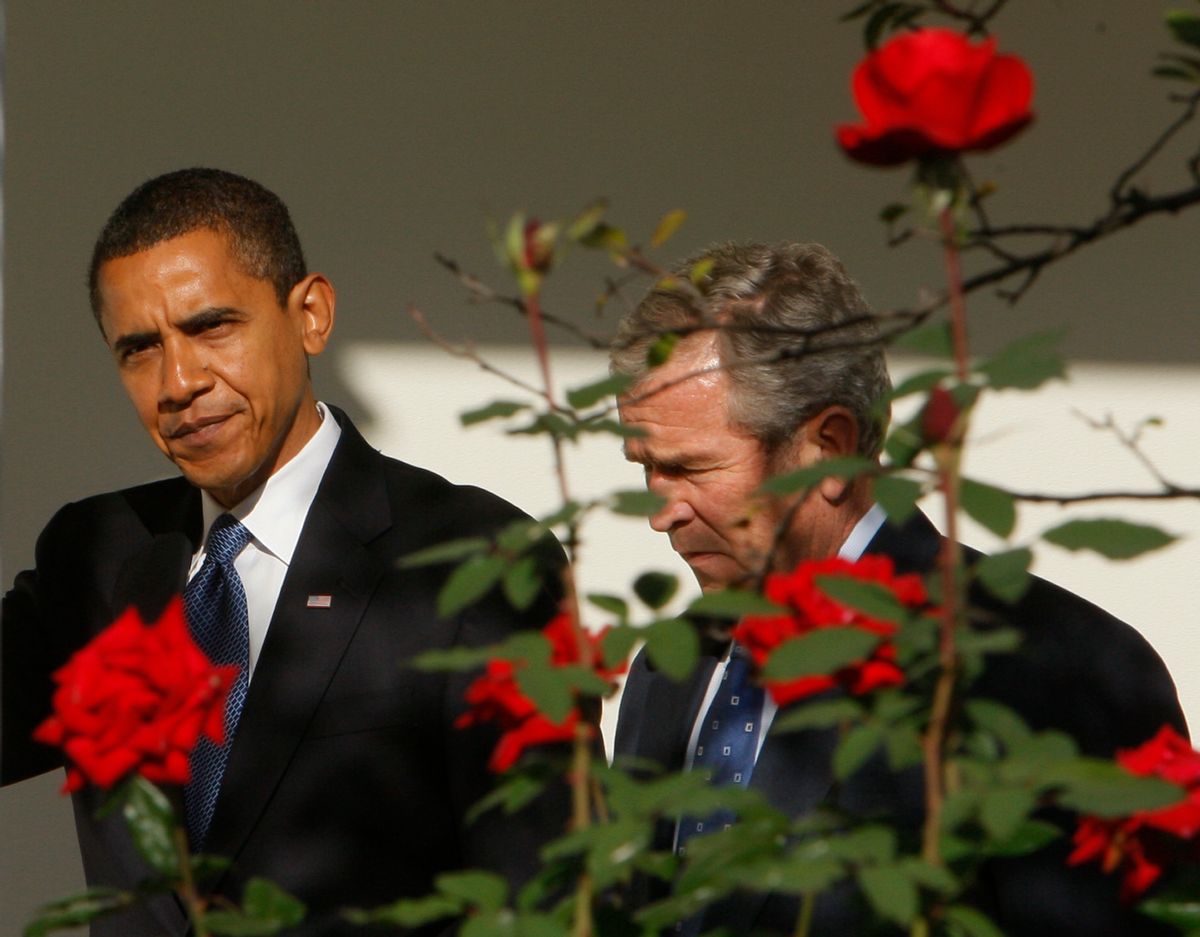 President Bush and President-elect Obama walk along the West Wing Colonnade of the White House in Washington, Monday, Nov. 10,2008, prior to their meeting. (AP Photo/Charles Dharapak) (Associated Press)
--

Whenever the U.S. Government wants to demonize a person or group in order to justify attacks on them, it follows the same playbook:  it manufactures falsehoods about them, baselessly warns that they pose Grave Dangers and are severely harming our National Security, peppers all that with personality smears to render the targeted individuals repellent on a personal level, and feeds it all to the establishment American media, which then dutifully amplifies and mindlessly disseminates it all.  That, of course, was the precise scheme that so easily led the U.S. into attacking Iraq; it's what continues to ensure support for the whole litany of War on Terror abuses and the bonanza of power and profit which accompanies them; and it's long been obvious that this is the primary means for generating contempt for WikiLeaks to enable its prosecution and ultimate destruction (an outcome the Pentagon has been plotting since at least 2008).

When WikiLeaks in mid-2010 published documents detailing the brutality and corruption at the heart of the war in Afghanistan, the Chairman of the Joint Chiefs of Staff, Adm. Michael Mullen, held a Press Conference and said of WikiLeaks (and then re-affirmed it on his Twitter account) that they "might already have on their hands the blood of some young soldier or that of an Afghan family."  This denunciation predictably caused the phrase "blood on their hands" to be attached to WikiLeaks and its founder, Julian Assange, in thousands of media accounts around the world.  But two weeks later, the Pentagon's spokesman, when pressed, was forced to admit that there was no evidence whatsoever for that accusation:  "we have yet to see any harm come to anyone in Afghanistan that we can directly tie to exposure in the WikiLeaks documents," he admitted.  Several months later, after more flamboyant government condemnations of WikiLeaks' release of thousands of Iraq War documents, McClatchy's Nancy Youssef -- in an article headlined:  "Officials may be overstating the danger from WikiLeaks" -- reported that "U.S. officials concede that they have no evidence to date" that the disclosures resulted in the deaths of anyone, and she detailed the great care WikiLeaks took in that Iraq War release to protect innocent people.

The disclosure of American diplomatic cables triggered still more melodramatic claims from government officials (ones faithfully recited by its servants and followers across the spectrum in Washington), accusing WikiLeaks of everything from "attacking" the U.S. (Hillary Clinton) and "plac[ing] at risk the lives of countless innocent individuals" and "ongoing military operations" (Harold Koh) to being comparable to Terrorists (Joe Biden).  But even Robert Gates was unwilling to lend his name to such absurdities, and when asked, mocked these accusations as "significantly overwrought" and said the WikiLeaks disclosures would be "embarrassing" and "awkward" but would have only "modest consequences."

Since then, it has become clear how scrupulously careful WikiLeaks has been in releasing these cables in order to avoid unnecessary harm to innocent people, as the Associated Press reported how closely WikiLeaks was collaborating with its newspaper partners in deciding which cables to release and what redactions were necessary.  Indeed, one of the very few documents which anyone has been able to claim has produced any harm -- one revealing that the leader of Zimbabwe's opposition privately urged U.S. officials to continue imposing sanctions on his country -- was actually released by The Guardian, not by WikiLeaks.

To say that the Obama administration's campaign against WikiLeaks has been based on wildly exaggerated and even false claims is to understate the case.  But now, there is evidence that Obama officials have been knowingly lying in public about these matters.  The long-time Newsweek reporter Mark Hosenball -- now at Reuters -- reports that what Obama officials are saying in private about WikiLeaks directly contradicts their public claims:

Internal U.S. government reviews have determined that a mass leak of diplomatic cables caused only limited damage to U.S. interests abroad, despite the Obama administration's public statements to the contrary.

A congressional official briefed on the reviews said the administration felt compelled to say publicly that the revelations had seriously damaged American interests in order to bolster legal efforts to shut down the WikiLeaks website and bring charges against the leakers. . . .

"We were told (the impact of WikiLeaks revelations) was embarrassing but not damaging," said the official, who attended a briefing given in late 2010 by State Department officials. . .

But current and former intelligence officials note that while WikiLeaks has released a handful of inconsequential CIA analytical reports, the website has made public few if any real intelligence secrets, including reports from undercover agents or ultra-sensitive technical intelligence reports, such as spy satellite pictures or communications intercepts. . . .

National security officials familiar with the damage assessments being conducted by defense and intelligence agencies told Reuters the reviews so far have shown "pockets" of short-term damage, some of it potentially harmful. Long-term damage to U.S. intelligence and defense operations, however, is unlikely to be serious, they said. . . .

However, shortly after stories about the cables first began to appear in the media, State Department officials were already privately playing down the damage, the two congressional officials said.

In response to Hosenball's story, Obama officials naturally tried to salvage the integrity of their statements, insisting that "there has been substantial damage" and that there were unspecified "specific cases where damage caused by WikiLeaks' revelations have been assessed as serious to grave."  But the only specific cases anyone could identify were ones where the U.S. was caught by these documents lying to its own citizens or, at best, concealing vital truths -- such as the far greater military role the U.S. is playing in Yemen and Pakistan than Obama officials have publicly acknowledged.

And this, of course, has been the point all along:  the WikiLeaks disclosures are significant precisely because they expose government deceit, wrongdoing and brutality, but the damage to innocent people has been deliberately and wildly exaggerated -- fabricated -- by the very people whose misconduct has been revealed.  There is harm from the WikiLeaks documents, but it's to wrongdoers in power, which is why they are so desperate to malign and then destroy the group.

Just as was true in 2003 -- when the joint, falsehood-based government/media demonization campaign led 69% of Americans to believe that Saddam Hussein participated in the planning of the 9/11 attacks (the Bush era's most revealing fact about American politics) -- this orgy of anti-WikiLeaks propaganda has succeeded, with polls reliably showing the American public largely against the group and even favoring its prosecution (citizens in countries not subjected to this propaganda barrage view the group far more favorably).  As has been demonstrated over and over, when the U.S. Government and its media collaborate to propagandize, its efficacy is not in doubt.  And as Marcy Wheeler notes, these lies were told not only to distort public opinion and justify prosecuting WikiLeaks for doing nothing more than engaging in journalism, but also to coerce private corporations (MasterCard, Amazon, Visa, Paypal) to cut all services to the group.

The case against WikiLeaks is absolutely this decade's version of the Saddam/WMD campaign.  It's complete with frivolous invocations of Terrorism, grave public warnings about National Security negated by concealed information, endlessly repeated falsehoods, a competition among political and media elites to advocate the harshest measures possible, a cowardly Congress that (with a few noble exceptions) acquiesces to it all on a bipartisan basis and is eager to enable it, and a media that not only fails to subject these fictions to critical scrutiny, but does the opposite:  it takes the lead in propagating them.  One might express bewilderment that most American journalists never learn their lesson about placing their blind faith in government claims, but that assumes -- falsely -- that their objective is to report truthfully.

UPDATE:  Kevin Drum, Dan Drezner and Daniel Larison all cite this report as evidence that the WikiLeaks disclosures have been insignificant.  They seem to equate a finding of "no harm to national security" with "nothing of significance," but not only are those two concepts not the same, they're hardly related.  Many revelations are very significant even though they do not harm national security.

When The New York Times revealed that the Bush administration was eavesdropping on Americans' communications without the warrants required by law, that revelation was extremely important even though it entailed no national security harm.  The same is true of The Washington Post's exposure of the CIA "black site" program, or David Barstow's exposé on the Pentagon's propaganda program, and countless other investigative reports.  The WikiLeaks disclosures -- like most good investigative journalism -- harm those in power who do bad things (by exposing their previously secret conduct), but do not harm the national security of the United States.  I'd be interested in hearing anyone who wants to argue that the WikiLeaks disclosures contain "nothing new" dismiss the actual revelations (here and here).

As for the comparison of this deceit to Saddam/WMD:  obviously, the magnitude of the consequences are not similar, but the misleading tactics themselves -- for the reasons I enumerated -- are.  Moreover, prosecution of WikiLeaks would hardly be inconsequential; it would likely be the first time in history that a non-government employee is convicted of "espionage" for publishing government secrets and, as such, would constitute one of the greatest threats to press freedom in the United States in a long time.