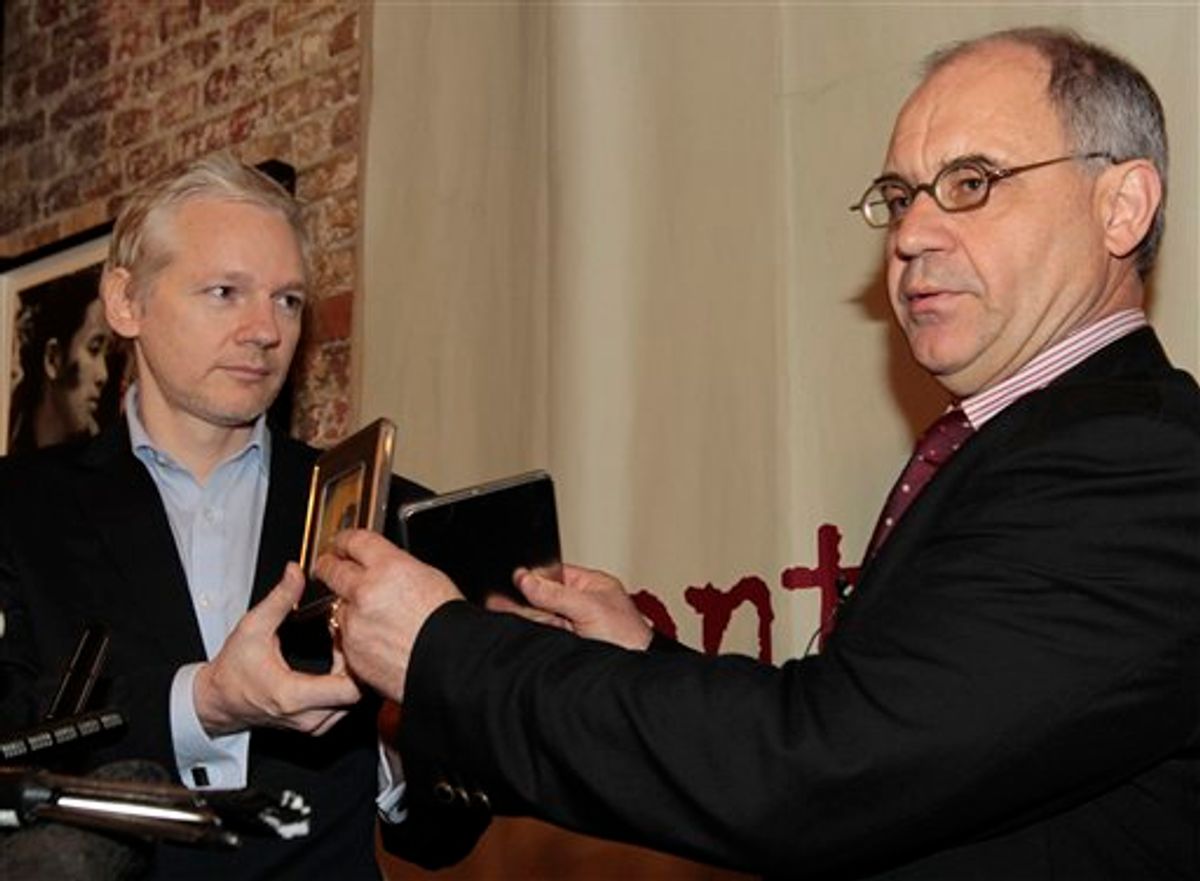 Former Swiss banker by Rudolf Elmer hands two CD cases full of files to WikiLeaks founder Julian Assange, left, following a news conference at the Frontline Club in London, Monday Jan. 17, 2011. Elmer blew the whistle on the conduct of Julius Baer Bank in the Cayman Islands for which he is set to stand trial in Zurich, Switzerland, on Jan. 19 for breaching Swiss bank secrecy laws. Accompanied by his lawyer Jack Blum, he will reveal more details of alleged abuses in the world of offshore financial centres. As he did back in 2007 he will pass the said documents and information to Wikileaks.(AP Photo/Lefteris Pitarakis) (AP)
--

A Swiss banker who claims to have handed WikiLeaks details of rich tax evaders has been found guilty of coercion and breaking Switzerland's strict banking secrecy laws.

Elmer claimed at the one-day trial in Zurich's banking capital Wednesday that he acted after being persecuted by his former employer Julius Baer.

He also claimed to have wanted to expose widespread tax evasion by rich businesspeople and politicians when he sent confidential banking files to tax authorities, media and later WikiLeaks.

ZURICH (AP) -- A Swiss banker who claims to have handed WikiLeaks details of rich tax cheats acknowledged Wednesday that he made mistakes in his effort to expose the world of offshore tax evasion.

Rudolf Elmer said his nine-year campaign against former employer Bank Julius Baer was marred by missteps, as he awaited sentencing before a Zurich court on charges of coercion and breaking Switzerland's strict bank secrecy laws.

"I made big mistakes, I admit that," he told reporters during a break before the verdict. "I wouldn't say I'm a hero, but also not that I'm a traitor."

Zurich prosecutors allege that Elmer stole client data after being fired from his job at the Cayman Islands branch of Julius Baer, and then tried to extort money from the Swiss-based bank and its senior executives.

Elmer claims he was being persecuted by the bank.

"I was in an extreme situation," he said. "It's logical that I developed a defense strategy."

Elmer said he was also trying to expose a widespread system of tax evasion by rich businesspeople and politicians.

The case has generated intense interest abroad because of the link to WikiLeaks, and in Switzerland, where bank client privacy has a special place in the national psyche.

Several Swiss banks including UBS AG and Credit Suisse Group have suffered embarrassing data leaks in recent years -- some at the hands of disgruntled employees.

Appearing before a single judge at Zurich's administrative court Wednesday, Elmer admitted sending threatening messages to some bank officials, but insisted he had done so after the bank fired him from his job as chief operating office on the Cayman Islands and then intimidated him.

He denied issuing a bomb threat against the bank, but admitted threatening to send details on its exclusive offshore clients to tax authorities in Switzerland, Britain and the United States. Elmer said the data would also be sent to Neo-Nazi groups "and other organizations which fight the capitalism (sic)," according to a prosecution statement.

Prosecutors say authorities have launched at least one tax evasion case after receiving the data.

The prosecution case against Elmer, who claims to have suffered physical and psychological illness as a result of his treatment by the bank, reads like a mix of farce and Jason Bourne novel.

Elmer was fired in 2002 after refusing to take a lie detector test on the Cayman Islands, where he had worked for the bank for eight years.

Prosecutors claim he spent the next few years moving between Switzerland, the Isle of Man, Germany, Austria and Mauritius. At times he is alleged to have offered to sell stolen data back to Julius Baer, at times he threatened to expose what he described as "unethical or even criminal behavior" by the bank's senior management.

"The more I rose professionally at Julius Baer, the more I became involved in illegal activities that were required of me," he told the court.

Elmer is alleged to have posed at times as a member of a Mexican drugs cartel, at others he used the name "Robin Hood."

"I wouldn't say it was revenge, but I defended myself," he later told reporters. "That's human nature."

"Elmer has been trying to portray himself as a whistleblower for a long time," said Daniel Thelesklaf, a transparency campaigner and head of the think tank Basel Institute on Governance.

Financial journalists and campaign groups have been wary of the files Elmer provided them, said Thelesklaf.

"Nobody wanted his information, which indicates the low quality of the data," he said.

Still, the case would help spur the discussion in Switzerland about why exactly the country's banks are setting up branches on Caribbean islands, if not to help clients exploit tax loopholes, said Thelesklaf.

Prosecutors asked the judge Wednesday to sentence Elmer to eight months in prison and a fine, citing his recent trip to meet WikiLeaks representatives in London as an example of his persistent efforts to illegally distribute confidential information.

On Monday, Elmer staged a dramatic ceremony in London, where he handed over two more data CDs to WikiLeaks founder Julian Assange. Elmer claimed the disks contained names of 2,000 wealthy account holders, but refused to give details of the companies or individuals involved.

"WikiLeaks should examine the CDs very carefully because they can't afford to put forged documents online," said Thelesklaf. "I wouldn't be surprised if they're never published."

Elmer actions have previously caused trouble for WikiLeaks. In early 2008, a U.S. judge shut WikiLeaks down for two weeks after a complaint by Julius Baer, marking the only time that the secrecy-spilling website has been forced offline for a significant amount of time.

A verdict is expected later Wednesday.