How "World of Warcraft" helped me through my divorce

My marriage was falling apart when my son begged me to play. Who knew a computer game could teach me so much? 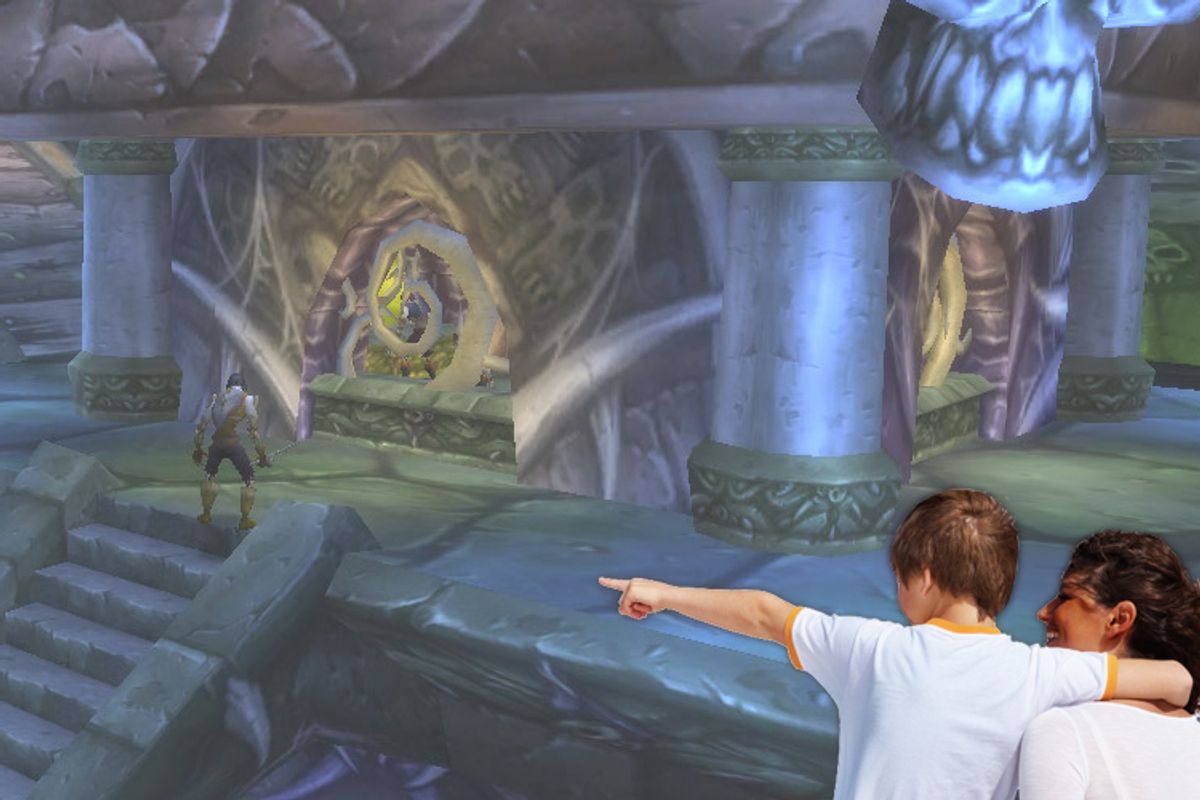 For those of you without boys underfoot: "World of Warcraft" is an online computer game where players log in to explore a world of grim forests, mountain ranges and jungles crawling with purple Undead, among other creatures. Quests earn treasure, skills and opportunities for ever-more-difficult quests. Death is frequent, but adds up to only a brief pause in play. "Resurrection" begins in the shadow of an angel hovering to spooky music. Then you run to the spot where you were slaughtered, click "accept," live again and play on.

"WoW," as it is known, is not for moms, especially ones who think computer-based games are only slightly less harmful than crack cocaine. It is not necessarily for people with jobs or old houses or novels-in-progress. Playing can suck up entire afternoons. At the end of a session, all I have to show for my time is a shoulder twisted by keyboarding and a virtual knapsack filled with ruined leather scraps (you can loot and skin your prey), copper coins and frayed pants, depending on my adventures.

"WoW" is definitely not for someone facing the end of three decades of marriage. Yet I am all of these things as well as a Darkspear Troll mage, with my home in the Barren Lands, a savanna populated with livid pink T-Rexes who wear blue necklaces and matching earrings. I am Level 21 (out of 70), just high enough to get out of the newbie playpen and die suddenly as I stray past cave bears or mega-spiders.

Beside an occasional game of "Pong" played when I waitressed as a college student, I am not a gamer. My son -- 9, intensely social, a reader of Greek myths and Marvel Comics and deprived of even a Game Boy -- is the one who proposed spending his allowance on a "WoW" installation disk and the monthly subscription necessary to play.

Another summer, I would have enforced the ban on computer-based games. Too many times, I've seen formerly healthy, interesting, friendly boys grow fat and sullen in front of a screen. My husband and I treasured our son's bright interest in the world, his delicious combination of bravado and intensity that makes little boys such delightful creatures.

Until my husband delivered the 10-minute fatwa: He wasn't happy, had never been and wanted (or already had) the younger girlfriend. Without warning, I joined a great and storied company: the Unwanted.

Summer had just begun. When my husband and I decided to have children and buy a house, we read all of the how-to books. Now, faced with divorce, I headed to the bookstore, struggling to map the terrain of lawyers and therapists and single parenthood.

At 14, my daughter is old enough to imagine life post-parent. But my son is still in that time (I remember it well) when you cannot imagine living without your mom and dad. That summer, my son forbid me to swim beyond the crest of the waves when we visited the beach. At night, he would sneak into my bed, pressing his feet into mine. He examined me for signs that I was falling apart.

So when he asked for "WoW," I surprised myself by saying yes. To play, you create an avatar from one of two factions: Horde or Alliance. The Alliance has more beautiful avatars; the Horde more interesting ones. I selected a Horde troll, since I could have tusks like a wild boar. Tusks, I reasoned, would be a useful feature to have in the life I found myself so unwillingly leading, as a divorced, almost 50 mother of two.

In many ways, "WoW" was weirdly evocative of what I faced in life. I was newly alone and, like my avatar, dependent on the skills I had, not the ones I wished for. At each turn, I seemed to be facing new dangers. Often, I died. But I rose again and again, finding within myself a bedrock strength that even this calamity did not erase.

My son and I learned "WoW" together. While he commandeered the keyboard, I sat beside him, to help him choose a path. "WoW" has rightly been praised as a game developers' masterpiece of landscape. The flat expanse of eastern Colombia, for example, is similar to the Barren Lands. Darnassus looks like a nighttime version of Muir Woods, if only someone had installed glowing purple lights and slime creatures.

My son has a generous, intuitive spirit. Though I've done my best to seem normal, like a weather vane he reads my moods. For weeks, I walked like the Undead through the routines of family life. I felt as gaping as the creatures in Undercity, a "WoW" metropolis, with their chests ripped open to expose neon-colored hearts. During the miserable months of August, I felt suffocated by the heat and loneliness, abandoned in some game cul-de-sac the developers had forgotten to populate.

Then my son would invite me to play, his voice shiny with intentional cheer. I would find myself with his arm curled around my neck like the tenderest, toughest vine. His fear of what was happening to us moored me to earth. The end of love is a voyage to an unknown land, with mysteries and dangers that I had to learn to navigate. No wonder explorers need to write accounts of their travels. If the story goes untold, then it is just a lot of pounding down unnamed trails, with no real reward.

So here are my "WoW" lessons, thanks to my son: Adversity earns experience that levels you up and gives you more power. I don't advise you to head heedlessly into an unexplored place; monsters can smack you down without warning. Read the rule book first. On the other hand, exploring can lead you to a particularly choice piece of treasure. Caution and adventure can be compatible, in other words.

Flying is always a good idea. Watch your health and mana, the "WoW" term for spirit and magical power. But do not conserve these endlessly, since spending some can lead to great rewards.

Repair your armor. Drink water. There is always a king at the center of the castle or the depths of a cave and it is a good idea to talk to him. Help other players when they are in trouble. If you are lucky, another player will help you just when you need it.

I hate seeing my children hurt. But I've also seen my son reveal gifts that had, until my "WoW" summer, been hidden to me. My son ministered to me, in his way and with his tools. Yes, it was via a computer game, that mixed bag. He sat with me and hugged me and helped me fire-blast Scarlet Hunters and retrieve crates stolen by Dustwind Harpies. Through these wild characters, all the gore and running, with the shrill shriek of Decayed Morlocks in my ears, I felt his love.

I was never, really, alone. On many afternoons, a little boy carried me.