Pick of the week: The amazing Paprika Steen in "Applause"

Pick of the week: The Danish star's riveting turn in "Applause" might not win big awards -- but it should 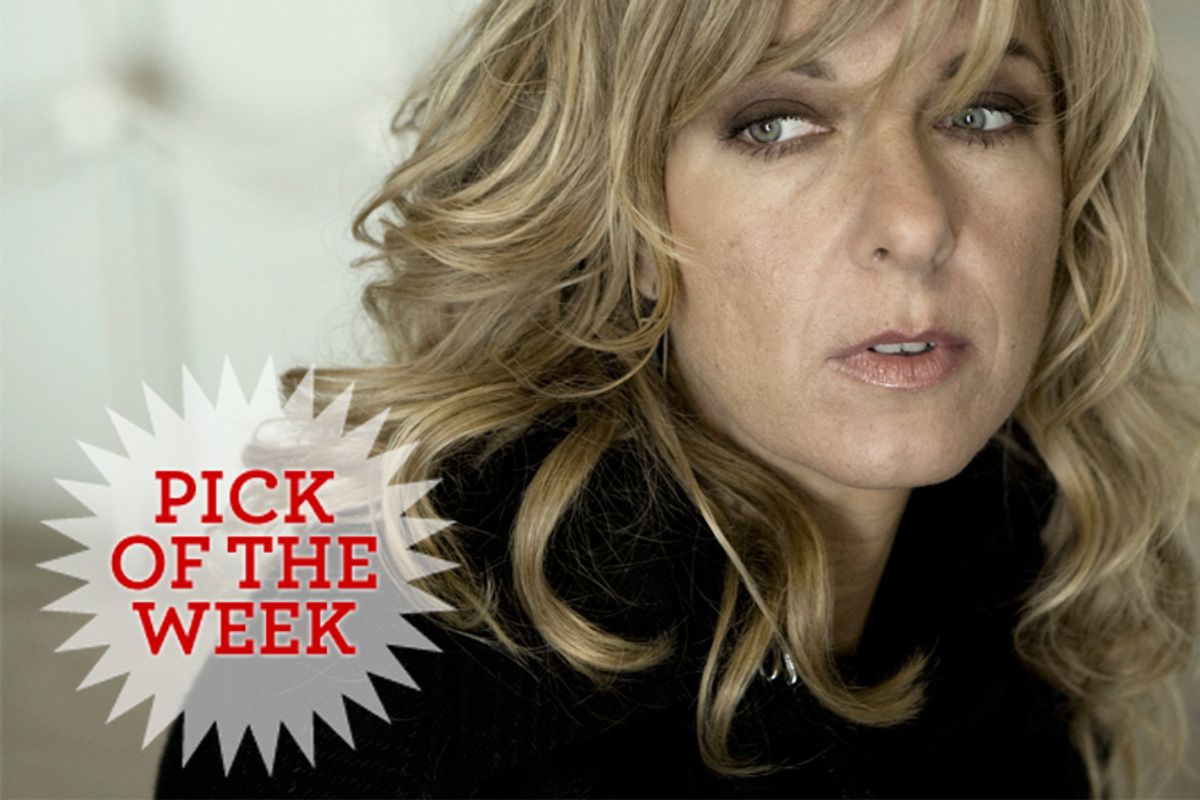 In the taut and daring Danish film "Applause," actress Paprika Steen comes out spitting venom, almost literally, even before we see her. What she says comes out of a black screen at first and sounds strangely familiar, even in another language: Full of the self-knowledge that comes from being drunk as a skunk, she's berating her husband, George, with that long-simmering mixture of contempt and love that defines a bumpy marriage. Wait a minute, we think -- George? Martha? What reality is this? Then we see Steen's character Thea for the first time, blowsy, sexy and middle-aged, in a backless, sleeveless dress, and it all falls into place. She's an actress, onstage, performing the Liz Taylor role of Martha in "Who's Afraid of Virginia Woolf?"

This probably doesn't matter while we're watching the film, but Steen really did play Martha on the Copenhagen stage in 2008, and what we see in "Applause" are authentic and electrifying video excerpts from those performances. This isn't quite some Charlie Kaufman-style postmodern gambit, though, and Thea is not an autobiographical portrait. Rather, director Martin Peter Zandvliet and co-writer Anders Frithiof August (son of the Oscar-winning Danish director Bille August) are using Steen's stage career as a realistic element in their low-budget, riveting fiction about an actress whose offstage life comes too close to her onstage theatrical role. This is a film rooted in old-school independent cinema -- maybe three parts John Cassavetes' "A Woman Under the Influence" to one part Bergman's "Persona" -- with a commanding central performance to match.

There's an under-the-radar publicity campaign aimed at garnering an Oscar nomination for the 46-year-old Steen, and if you think that sounds far-fetched (given that you've probably never heard of her, or this movie), you're right. But that's not the same thing as saying it's not deserved. Steen is in every scene and nearly every shot of "Applause," and she portrays Thea with pitiless courage. She's a not-quite-recovering alcoholic and a vicious prima donna, and she has surrendered custody of her two young sons to her ex-husband, Christian (Michael Falch), for reasons we can imagine but may not want to think too hard about.

Yet somehow, even playing a character most of us would feel lucky never to meet, Steen never entirely loses our empathy and compassion. She is damaged, difficult and selfish, but wishes no one harm. She loves her sons and (we suspect) still loves the battered, handsome Christian. In an early scene, she gives Christian's wife, Maiken (Sara-Marie Maltha), a composed and beautiful psychologist, an expensive espresso maker as a gift, and it's impossible to separate the desire for a normal adult relationship from the boundary-infringing, passive-aggressive assault. It would be far too easy to take Thea over the top into crazy-bitch ex-wife territory -- to have her become Martha at her worst, in effect -- but Steen and Zandvliet never go there. Thea still has some self-control and some vestiges of personal dignity, even when she's scrounging through the trash for non-empty liquor bottles or picking up strangers in dive bars.

You could say that not all that much happens in "Applause" -- Thea acts in "Virginia Woolf," quits drinking and then falls off the wagon, tries to work out a new relationship with Christian, Maiken and her sons -- but that's a little like saying not that much happens in "Anna Karenina" or "Madame Bovary." Steen shows us the interior landscape of a damaged, charismatic woman who has been deformed by fame and self-loathing but has not quite lost her capacity for love and decency. "Applause" may present as gritty European realism, but the struggle inside Thea is almost theological in scale, and worthy of Milton or Kierkegaard.

If indeed you have heard of Steen, it's either because you're Danish -- she's a big star at home -- or because you paid attention to the once-controversial Dogme 95 movement, in which she played an important role. (Steen appeared in the first three Dogme films: Thomas Vinterberg's "The Celebration," Lars von Trier's "The Idiots" and Søren Kragh-Jacobsen's "Mifune's Last Song.") That movement, with its deliberately silly "vow of chastity," has been officially defunct for years, and "Applause" would break its rules in any number of directions. But it's worth noting that Dogme, however easy it was to mock, launched a wave of taut, realistic cinema across northern Europe that's still going strong, and showed a generation of younger filmmakers that they could twist Hollywood convention to their own purposes.

There's nothing pretentious or overly difficult about "Applause"; it runs less than 90 minutes and features a bona fide star performance. Its subjects include divorce, parenting, alcoholism and show business, which covers at least half of Hollywood's so-called serious movies. But of course it's shot (by Jesper Tøffner) on intimate, hand-held video -- I don't mean ostentatious or nauseous shaky-cam -- largely in close-up and in unforgiving natural light. If it strikes many Americans as a breakthrough for its veteran actress and its young director, it should also remind us that the movie world is much wider and more diverse than we usually notice.

"Applause" is now playing in New York and Los Angeles, with more cities to follow.