How my hippie parents turned me into a consumer

Mom swore by composting and hand-sewed clothes, but I longed for the comforts of Kraft singles and brand-name shoes 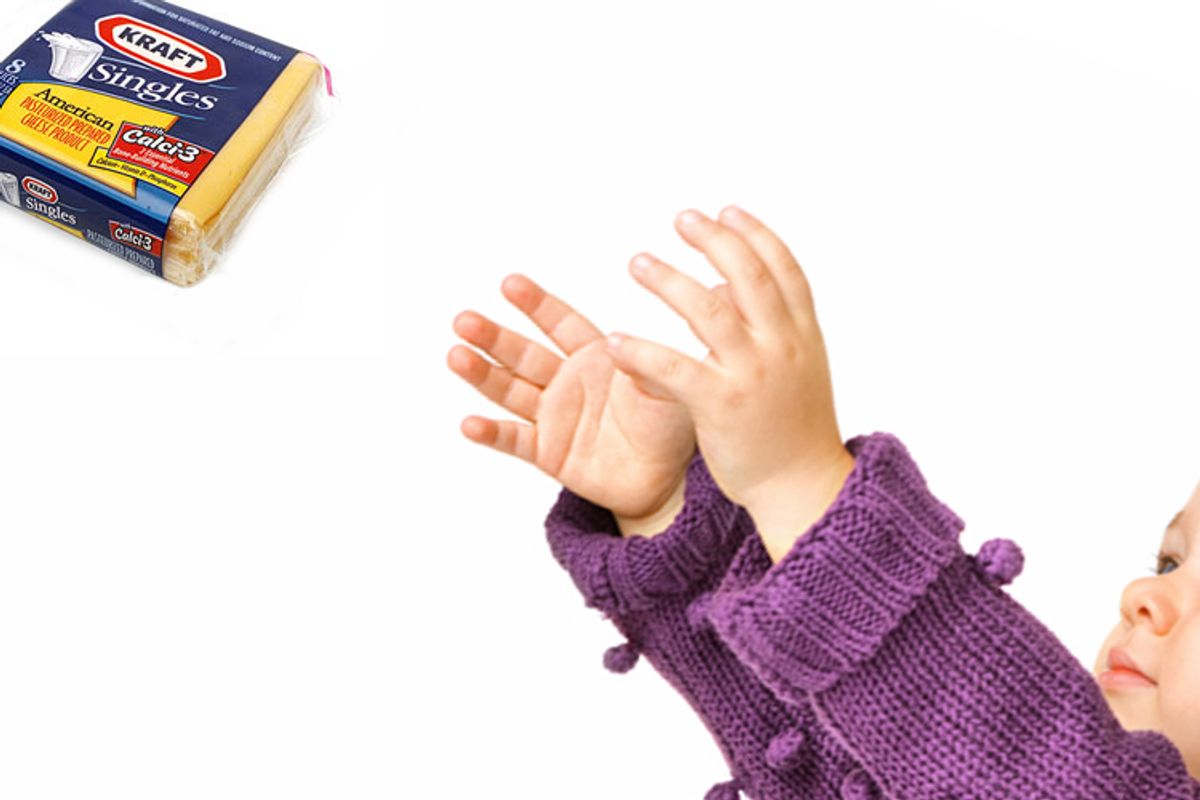 My mother pulls plastic bags out of our cart, like a magician pulling silk scarves from a hat.

My mom shoves a handful of used plastic sacks at the man, who dubiously unfurls a bag, discolored and greasy from months of use. I cringe. Behind us in line, a sour lady with glasses is buying double-ply Charmin, Downy, Wonder Bread, Kraft singles, Jif. In short, she is buying everything I want in this world: normalcy.

Most of my family's groceries are from the bulk section -- bulgar, granola, dried black beans, turmeric. We are also buying chicken marked with bright orange QUICK SALE stickers. ("I hate to buy this Styrofoam," my mom says, "but the idea of all this meat going to waste might be worse.")

Still, the worst is yet to come. My mother opens her wallet and counts out what looks like Monopoly money. I look back to see if the rest of the people waiting in line are watching her use food stamps. The sour lady with the glasses sniffs.

In my mind all of this leads back to the same thing: the shame of eccentricity and poverty. I wish, like I have wished a thousand times before, that we were normal. I wish that we lived in a white house with geraniums in planters and green shutters. I wish that my lunches were Kraft singles and baby carrots with ranch dressing, packed in authentic Tupperware containers. I wish that school shopping suddenly meant the same thing to my parents as it does to my schoolmates' parents, who buy packages of white athletic socks and miraculous Side-out T-shirts and Lisa Frank trapper keeper folders.

Instead, I wear hand-me-downs or Guatemalan-print dresses that my mother sews for me and I trail listlessly behind her as she kvetches over the shopping list of supplies my elementary school prints out each year: Didn't we buy you a binder last year? You can just use that one. And what happened to those erasers? You still have your eraser from last year, don't you? You don't need all of this crap. This is ridiculous. Consumerism!

When I whine for a pair of new "brand-name" shoes, my mom does her best Janis Joplin impression:

"Oh Lord, won't you buy me a Mercedes Benz ... My friends all drive Porsches, I must make amends."

And so I arrive to my fifth grade classroom in my handmade dress and my saggy purple socks and my China flats from last year, carrying my brown bag lunch with its recycled yogurt container full of snapper ala Veracruzana, clutching last year's binder to my chest as I fiddle with my nubby Pink Pearl eraser and silently curse my parents. I curse being poor too.

Though they moved "back to the land" in the '70s, my parents aren't textbook hippies. My mom wears a black rabbit fur coat (used, of course) and knows how to scam tickets to the opera. My dad listens to country music and says that organic food is overpriced and therefore elitist. But we are all ruled by a classic hippie mantra: reduce, reuse, recycle.

My dad goes treasure-hunting in Mexican dumps, and in the back room of our house (which is built with scavenged materials), he saves bits of wire and bent nails and rusty screws and plastic caps that he uses to repair our appliances and furniture and vehicles.

"Duct tape," he says, "holds the world together." And then he laughs the way dads do when they think they are being funny and original.

When plates break, my mother glues them back together and hangs them on the wall for decoration. Our dish towels are so old you can see through them. When we are camping (which is the better part of the year) we have to wash dishes in plastic tubs that have become greasy with age. As soon as you pour water into the tub, it swirls with a rainbow slick. But my mother hates "bringing more plastic into this world," so we eat off greasy dishes.

But probably worst of all, even worse than the bags, is my mother's obsession with compost. There is nothing she detests more than needlessly generating garbage, so she insists on keeping a compost bin, even when we are traveling. We drive around Mexico and Guatemala with a festering compost bucket in the back of the van. My mom is always in search of a pig. Sometimes she'll knock on the door of a strange house and ask the owner if he or she has a pig that might like to eat some slop. Of course, it's Mexico, so no one ever bats an eye. Except for me.

By the time I go to college it's the late '90s and I discover that growing up poor and eccentric is better currency than being a rich kid from the suburbs. I realize that my parents are cool. "Oh yeah, my dad helped write this book that's like a cult classic. And when I was 9 my parents took me on a peyote pilgrimage with these crazy Indians, the Huicholes. I pretty much grew up on the road," I tell my friends. "We used to go to the food bank when I was a kid," I say. Everyone is impressed.

But though I've gotten over being embarrassed about my parents' eccentricities, I'm still irritated with their hippie philosophies. Evergreen is a hippie university, and everyone is obsessed with compost and co-ops and fair trade and recycling. The religious zeal of the student body adds fuel to the flames of my annoyance. Yeah, yeah, I've heard it all before. I spend my student loan money at Target buying gloriously new clothing, and instead of recycling, I devise a way to bowl using empty Budweiser bottles as pins.

When I grow up, I buy Tupperware containers and boxes of Ziploc bags and spray bottles of 409 and roll upon roll of paper towels. When things get beat up, I throw them away. I become the embodiment of the rebellious child who has vexed so many parents throughout history: the staunch Republicans who raise liberal Democrats, the parents who shun TVs only to discover their children are obsessed with network programming. I become what my folks detest most: a proud consumer. As far as my parents are concerned, I might as well be Alex P. Keaton.

My boyfriend and I get married on the land where I grew up, and I clean the old house rigorously. I try to throw out my mom's collection of old yogurt containers, which take up an entire shelf in the kitchen. I wait till she's not around and sneak them into the recycling. My mom digs them back out.

"They don't even make containers like this anymore," she says.

Around this time I begin to realize that it was never about being poor. Yeah, we were poor, and the reason we could afford to travel was because my parents were crafty and extremely frugal. But even if we'd had money there was no way my mom would have bought me a new Pink Pearl eraser or given up her search for a pig.

As I get older, I start to care more: about my future, about other people, about the world. I listen to the news and I hear about the North Pacific Gyre, a continent-size garbage island that's growing in the Pacific Ocean. I start gardening and realize that composting is actually kind of cool. But like so many Americans from more mainstream backgrounds, it takes Al Gore and a dying polar bear to turn me into a concerned citizen: when my husband drags me to see "An Inconvenient Truth," 30 years of my mom's diatribes about consumerism click into place. My rebellion against my parents' way of life officially ends. When Seattle puts a measure on the ballot to charge people extra if they didn't bring their own bags to the store, I vote in favor. And I think about my mom, who was miles ahead of her time.

My mom decides to move to Mexico, and my husband and I move out to the Oregon coast range to live in the house my parents built. There's no garbage service in the woods, needless to say. You have to drive to the dump, which is about 45 minutes away -- definitely the sort of expedition that makes you think twice before buying throwaway items.

My mom shows me the system she has set up for the garbage. (She is the type of person who has a system for everything.) "These are burnables, which you can use for starting the wood stove," she says, pointing at a bin. "And then there's the compost, of course." The compost bin is a large yogurt container circa 1973. "And this basket here is the landfill garbage, which you'll have to haul to the dump when you take the recycling." She tells me, "It costs $5 for each load, but I usually only go twice a year." I stare at her.

"You only take out the garbage and recycling twice a year?"

She tells me she only generates two small bins of landfill trash a year. I am humbled.

I'm still nowhere near as good a conservationist as my mom: Sometimes when I encounter a plastic bag with bits of rotten lettuce stuck to the inside, I furtively throw it away. I still buy paper towels. I would never, in a million years, knock on someone's door to ask them if they want my bucket of compost. But I'm trying, and I finally forgive my parents for the years of torture. Meanwhile, my mother is somewhere in Mexico, in search of a pig.