"Portlandia": Can the left laugh at itself?

SNL's Fred Armisen dares to poke fun at organic food-eating, liberal culture in "Portlandia." But is it funny? 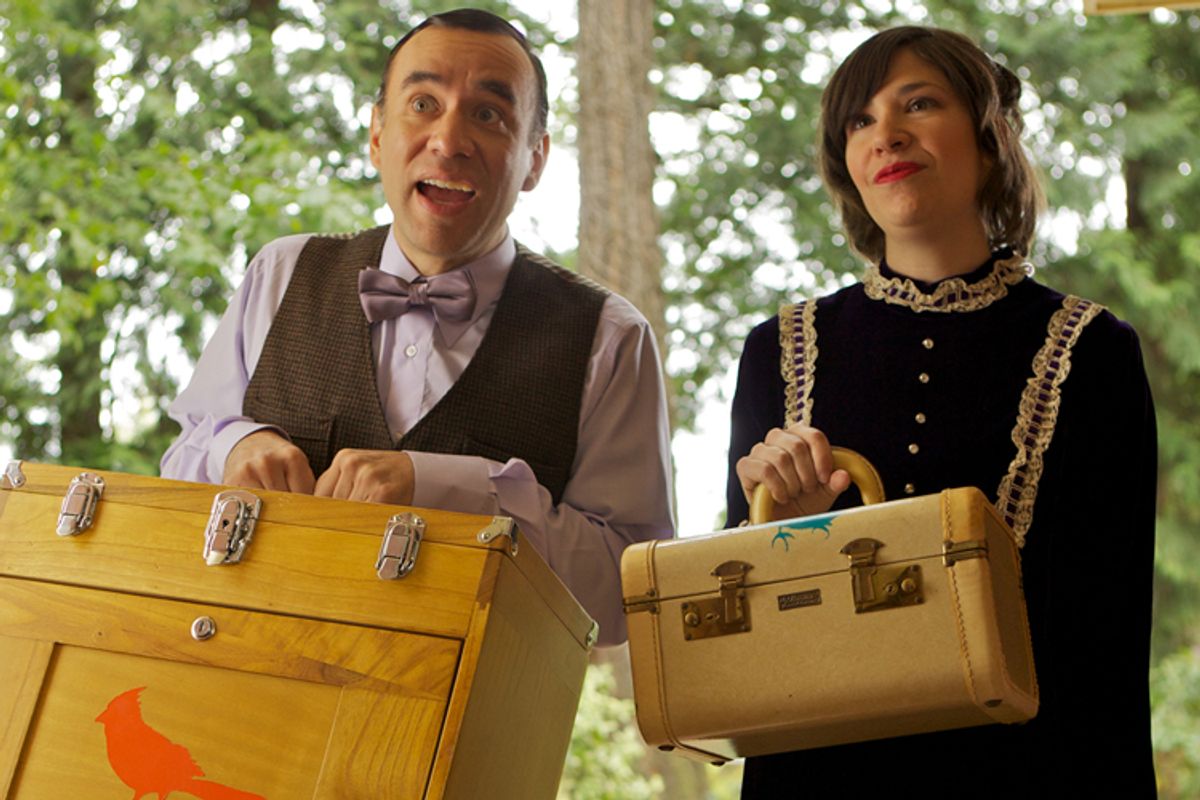 In a restaurant sketch on the new IFC series "Portlandia," a waitress approaches a man and woman at a table and asks if they’re ready to order. The woman says she’d like to know more about the chicken.

"The chicken is a Heritage Breed, woodland-raised chicken that’s been fed a diet of sheep's milk, soy and hazelnuts," the waitress replies.

"This is local?" man asks, leaning thoughtfully on his hand.

The questions get more intense and detailed, to the point where the couple sounds as though they’re doing a background check on a Supreme Court nominee. The waitress leaves for a moment, then returns with a dossier. "His name was Colin," she says. "Here are his papers."

IFC surely had to ask itself that question before bankrolling "Portlandia," a pet project of "Saturday Night Live" star Fred Armisen and Carrie Brownstein, a former guitarist and vocalist for Sleater-Kinney. The limited-run series, which premieres Friday night at 10:30 p.m./9:30 Eastern, is as subtle as an off-kilter, half-hour sketch series can be. Armisen and Brownstein play most of the characters, often with strange wigs and facial appliances (in one sketch, Armisen sports a mustache that seems to be made of black electrical tape), but unlike so many "SNL" creations, the performers don’t get up in your face and demand to be laughed at.

And yet the humor is still corrosive. Armisen and Brownstein are targeting a specific Pacific Northwest subculture, but their barbs should lodge deep in any North American neighborhood in which people patronize food co-ops and vegan restaurants and independent bookstores with stacks of homemade ‘zines on the checkout counter, then zip home on mountain bikes bleating little warning noises from a whistle and muttering, "Bike, bike, bike, bike coming through!" Kyle MacLachlan -- a Yakima, Wash., native and the star of the greatest Pacific Northwestern pop culture touchstone ever, "Twin Peaks" -- shows up in the second episode; he's ostensibly portraying the mayor of Portland, but he's actually doing a devilishly funny send-up of a relatively new type of politician that has inflitrated every layer of American government: the soft-spoken, smiling, beanbag-chairs-in-the-office, "No, tell me about you"-type; the executive alpha dog as loyal puppy. (Portland's real mayor, Sam Adams, plays the fictional mayor's assistant.) All these social types and many others get slow-roasted (organically) in the first couple of episodes of "Portlandia."

Series director Jonathan Krisel ("Tim and Eric Awesome Show, Great Job!") even identifies certain modern, IFC-approved filmmaking clichés and works them into the sketches. The payoff to the restaurant scene -- the couple's pilgrimage to the woodland commune where Colin was raised -- mocks the sensitive/eccentric post-collegiate visionary type of direction where, for example, two people who’ve just been introduced instinctively realize they have a Deep Connection, and the scene conveys this realization by shifting into slow-motion close-ups of the connected people staring into each other's eyes while the soundtrack blasts a morose/magnificent pop tune that sounds like New Order played at half-speed.

The series rather pointedly teases a core section of IFC's audience -- a portion that will watch Armisen and Brownstein's antics very closely, with an eye for accuracy, and then either roar with recognition and approval, or go on the Internet immediately and write a blog entry about how "Portlandia" doesn't get Portland or Oregon or feminist bookstores or urban bike culture. Armisen and Browstein’s masterstroke is showing how certain flavors of modern leftist sensitivity/engagement can seem (to outsiders) like passive-aggressive self-absorption laced with contempt for the unenlightened.

"He looks like a happy little guy that runs around," says the man in the restaurant sketch, glancing at a wallet-size photo of Colin. "Does he have other chickens as friends?"