To all the girls who envy my life

As an escort, I often hear from young women who want the things I have. Here's what they don't understand 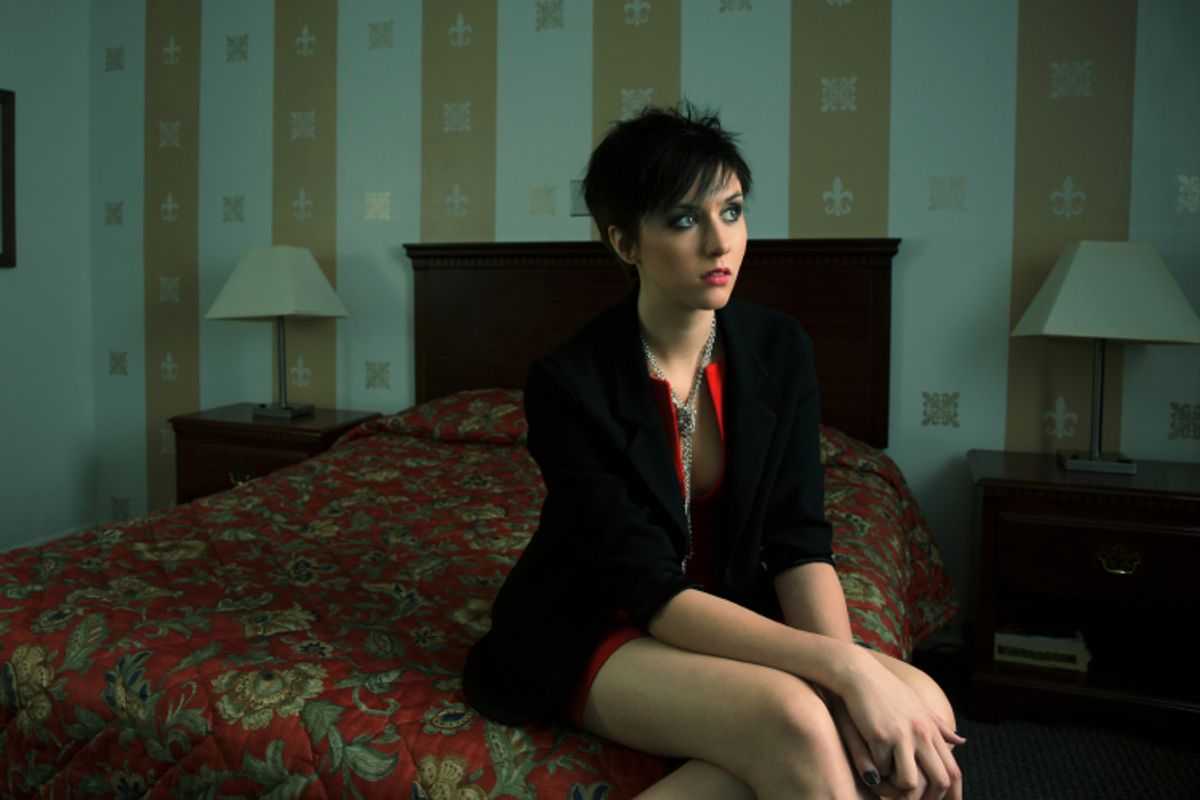 "I want your life," wrote the girl I'd never met before.

She isn't the only one. There have been periods when I can't go a week without opening an e-mail like this from a woman somewhere between the ages of 17 and 25. I'm not a celebrity, a trendsetter or an heiress. I am an escort.

For about three years, I've written honestly about my life as a prostitute on a modestly trafficked blog. I never intend to glamorize my profession, and I don't list expensive gifts I receive or lavish items I buy for myself. I avoid rhapsodizing about exotic vacations or name-dropping hotels. I never disclose my rates and I don't claim every encounter ends in mind-blowing orgasms -- or any orgasm at all. That type of sensationalistic hype is really only good for selling books or selling face time on TV shows, neither of which I'm interested in.

I use my space online to write as accurately as I can about the experience of having sex for money, mostly because I need that outlet for my own mental and emotional reasons, but also because the stories that usually reach non-sex-working audiences are too often two-dimensional and extreme -- focused on a white, "high-class" call girl finding happiness through her designer-label lifestyle, or drug-addicted and pimp-abused street prostitutes whose lives have been a series of degrading assaults. I do my best to not make my situation seem simplistic or easy to categorize. While I often write about clients whose company I enjoy, I also share my occasional fear, revulsion, violation and sadness. So why would some women want to duplicate my circumstances?

We could blame the usual scapegoats. "Secret Diary of a Call Girl" is a cutesy fantasy full of adventure and expensive fashion. One-time Eliot Spitzer date Ashley Dupre became known to the country as a tan, lanky beauty sporting designer accessories on a yacht. And so-called No. 1 Escort in New York Natalia McLennan recently released a memoir of her days making $2,000 per hour. But I think the causes are far more complex than a few pop culture artifacts. The glamour of prostitution can't be traced back to the 1970s "Happy Hooker" Xaviera Hollander or the unrepentant schlock of "Pretty Woman." It's the persistent symptom of a society that still insists sexual desirability is a woman's duty, and wealth is the most important hallmark of success. A young woman who is desirable is a young woman who wields power, and that power is often bestowed in the form of cold, hard cash.

Which isn't to say the women who e-mail me are power hungry. Rather, I think they are recognizing the ways their culture tells them to achieve. Girls aren't bombarded with messages telling them that their mental power is urgently needed to address issues like global warming or infectious diseases, or that their athleticism could be parlayed into a life as a professional athlete or coach. Instead, we're told over and over again that we earn a place at the table -- any table -- by being polished and well-dressed, with glossy hair and a slim figure. The girls who e-mail me are not lacking internal resources. They're educated, sensitive, observant, and they have the complex sentences and insightful wording to prove it. But they are living in a world where a woman's worth is constantly equated with her sex appeal. Is it any wonder that many women might find it compelling to take that equation to its logical end?

These women are also often insecure, which I recognize because I was (and am) insecure, too. When I first started working in the sex industry, I thought my motivation was purely curiosity, but I see now that while curiosity gave me courage, insecurity was wearing the spurs. I was so highly self-critical as a young adult that by the time I was 12 I vowed I'd have breast surgery. (I wanted a reduction, since natural large breasts meant I'd never look truly skinny.) I struggled with an eating and exercise disorder, both of which were so common among my peers that they were unremarkable. I talked my parents into paying for medically unnecessary braces to close the gap in between my front teeth, which was easy since most kids my age were having cosmetic orthodontic work as well. While I was sexually ravenous -- I was a teenager, after all -- I couldn't stand the thought of any boy seeing my body. So I was not quite a born natural when it came to selling myself for sexual consumption, but entering the industry quickly taught me that femininity is all performance, and it became a performance at which I was adept.

Practically speaking, envying someone for prostituting is like envying someone for eating at McDonald's. There are no bars to entry. You don't have to be beautiful, young or sexually skilled. Those aspects might help, but there's no entrance exam when it comes to sex work. You don't have to prove yourself to do it, and doing it proves nothing about you as a sexual being. Yet I'm often called "brave" by those who e-mail me, and this admiration is attributed to my perceived ability to shake off the constraints of polite society in pursuit of something stigmatized (and illegal). Most of this sentiment undoubtedly comes from the romantic quality bestowed on any taboo activity just by virtue of its being verboten, but I suspect a bit of the allure is drawn from the same masochistic curiosity that spawned sites like Hotornot.com. We're taught from an early age to keep an eternally vigilant (and critical) eye on our appearance, and it takes a strong, studied will to refuse to pose the questions many of us have had running in our head since puberty: Is she prettier than me? Does he think I'm cute? There's something almost merciful about finally having the clarity of a number, and once you're an escort, you've quite literally put a price on your sexual powers. That's an intimidating assignment for any young woman with a less than robust sense of self-esteem, but it can also be perversely satisfying: You've finally quantified your appeal.

Sex work may also appear to require some type of sexual precocity, a high sex drive or at least the willingness to jump headfirst into unpredictable intimate situations, qualities that all hold cachet for my generation. As Ariel Levy and others lamented, we'll be navigating the wake of "Girls Gone Wild" culture for some time, with its aggressive promotion of an anything goes attitude as the primary means to gender equality and sexual liberation.

Sadly, the national debate on prostitution could more accurately be described as a shouting match. Any sex worker's account of his or her own life that doesn't involve drug addiction, abuse and tragedy is often immediately derided as sensationalistic, dishonest and dangerously misrepresentative by those who are categorically opposed to the sex industry. Prostitution is denigrated as a soul-crushing, life-ruining choice, but it's simultaneously acknowledged to be deeply alluring. If these critics are to be believed, one positive story about hustling a businessman for some cash is so dangerous that virtually nothing will stop hordes of young women from shimmying into cocktail dresses and hitting hotel bars to taste that thrill for themselves.

And maybe the critics are right. Women are still burdened with astounding, disproportionate pressure to be both attractive and sexually willing, so they look for arenas in which to prove themselves as such. I don't think many of these curious women envision themselves prostituting for years or even a full 12 months. They don't think about lying to their parents and their friends, or telling their friends and suddenly feeling even more alone. They certainly don't envision the problems presented by trying to date while working or the necessary efforts they'll have to take to avoid law enforcement. They can only imagine those candlelit moments over pricey dinners when a well-dressed man slips them an envelope and they know for a moment that they are good enough.

There's something profoundly human about wanting to be sexually valued, and it transcends genders. More than one young man has told me he envies my life, too. I suspect these young men are hinting at the same longing for affirmation as the young women who e-mail me. We all want to know that we matter, and being paid is one way of knowing we have value. It may be inelegant and often impersonal, but because money is quantifiable, its message is indisputable. Where do you go for reassurance if you doubt your physical and sexual desirability? Talk is cheap, so you take cash instead.