Will CEO Jeffrey Immelt be another figurehead, or a real power broker? Workers might be hoping for the former 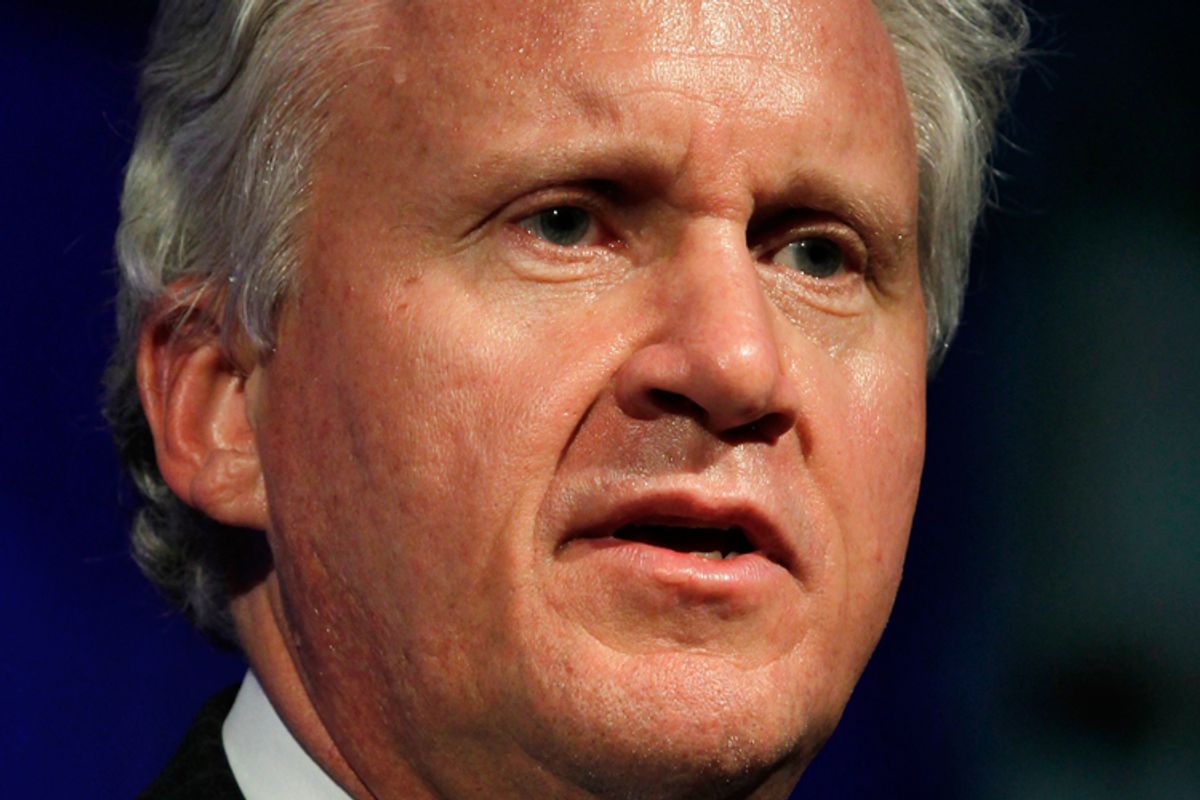 President Obama has chosen GE CEO Jeffrey Immelt to replace Paul Volcker as the head of his Economic Recovery Advisory Board, now reframed as a "Jobs and Competitiveness Council." According to Fox News talking head Noelle Nikpour, the appointment is yet another example of "Chicago-style politics payback." The new position is a reward, so her analysis goes, for NBC's "rooting" for Obama over the last two years.

Today's entry in Fox's through-the-looking-glass analysis of American politics would be funny if it wasn't so sad. The network that regularly hires Republican presidential candidates as paid pundits dares criticize NBC for favoritism? No one at Fox would have blinked an eye if George W. Bush had chosen the CEO of the United States' largest industrial conglomerate as an advisor. But if Obama picks him, it must be corruption!

Of course, the fact that Bush could just as easily have made the same pick has the left in an uproar. Jeffrey Immelt is an unabashed free trader who was warning as recently as July about the dangers of "over-regulating" the economy. Few American corporations have benefited more from globalization than GE. This is not the kind of guy who will make organized labor happy.

The irony, or agony, is obvious. In 2008, Obama went out of his way to trash the North American Free Trade Agreement while campaigning in Ohio. Meanwhile, over the last decade, GE has closed 15 factories in Ohio, and is under constant assault from progressives for moving green jobs to China.

How seriously we should regard this appointment depends in large part on how seriously we think Obama will rely on his new appointment for real advice. Many observers regarded the appointment of Volcker to the newly created economic recovery board as primarily for appearance's sake, and criticized Obama for not allowing the former Fed chairman to have more influence on policy. But the same underlying factors are responsible for Immelt's appointment. The White House wants to combat the perception that it is anti-business, but that doesn't mean anything fundamental is going to change (especially since any rational observer of the White House over the last two years is well aware that the anti-business accusation is complete malarkey!). If Volcker was a figurehead, so too, probably, will be Immelt.

The real question is what will increasing U.S. "competitiveness" mean, practically speaking, over the next two years? Investments in education and a strong safety net, à la northern Europe, do not seem to be on the table. Immelt's opinion piece in the Washington Post announcing his acceptance of the position is remarkably short on details, but you can get a pretty good idea of what his priorities are from the following passage.

We need a coordinated commitment among business, labor and government to expand our manufacturing base and increase exports. The assumption made by many that the United States could transition from a technology-based, export-oriented economic powerhouse to a services-led, consumption-based economy without any serious loss of jobs, prosperity or prestige was fundamentally wrong. But there is nothing inevitable about America's declining manufacturing competitiveness if we work together to reverse it. For example, we have returned many GE appliance manufacturing jobs to the States by collaborating with our unions and making our operations more efficient.

When CEOs like Jeffrey Immelt talk about "collaborating" with unions they usually mean forcing workers to accept cuts that lower their standard of living. If making the U.S. more competitive means taking concrete steps that exert downward pressure on U.S. wages and benefits so as to better compete with Chinese and Indian workers, then Obama will have completely betrayed what his party is supposed to stand for.