The peculiar ethics of the 2-year-old pole dancer

A magazine promotes family-friendly pole workouts, but the unsavory associations are hard to escape 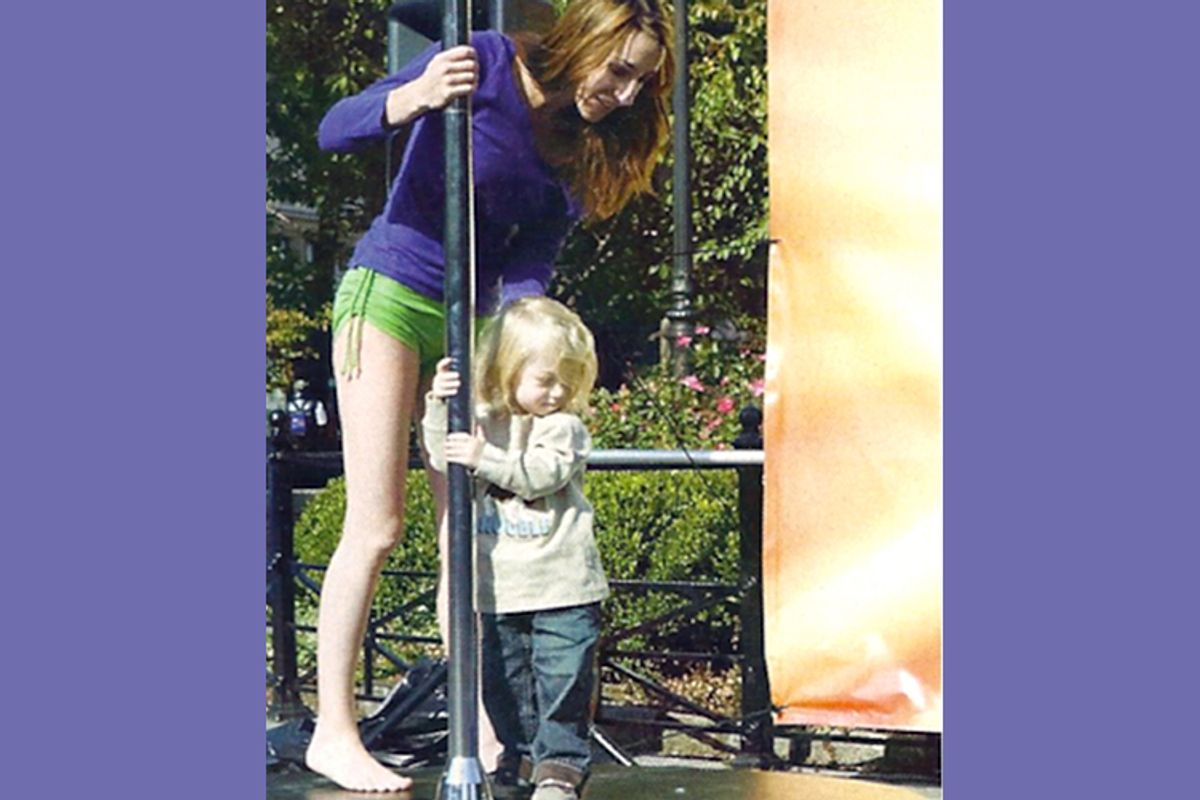 It used to be simple. Keep your boys off the pipe, keep your girls off the pole.  The pole, or as it's often more formally known, the stripper pole, is the item that makes a club a gentlemen's club, the zone generally regarded as the place the lady does her act when she's not confined to a patron's lap.

But despite its continued associations with Mötley Crüe classics and depressing Sofia Coppola movies, the pole is also a legitimate -- and challenging -- piece of exercise equipment, one used in plenty of dance and acrobatics routines that don't involve bills being stuffed into g-strings. But does any of that make it OK to put your girls on it now? Does it make it not weird that the new issue of Pole Spin, the "international pole dance and lifestyle magazine," features "the world's youngest pole dancer" and a family with four proud, pole-dancing teenagers?

Pole dancing has in recent years gained massive mainstream popularity. Pole dancers have petitioned to bring their skills to the field of Olympic competition, and you're as likely these days to find a pole at your health club as at a Bada Bing-themed bar. So it shouldn't come as a surprise that its instructional uses for anyone interested in dance and fitness -- male or female, adult or child -- would catch on, as evidenced by the Scottish dance studio that offers "pole fit" gymnastic classes to kids. And Pole Spin is certainly doing its bit to further destigmatize pole dancing: What could be less "Showgirls" than a cute 2-year-old dancer, except for the fact that the kid is a little boy?

The challenge then for everyone who sees the pole as something considerably more than just a prop for a runaway meth head to rhythmically lick to "Pour Some Sugar on Me" is how to broaden the public understanding of that fact. But for a magazine that featured a lithe, bikini-clad woman spread-eagled on its inaugural issue, Pole Spin seems uneasy with the dichotomy of the pole. With its wholesome features on a 6-year-old boy dancer and tips on "Family Pole Play," the magazine takes great pains to keep itself at several arms' lengths away from the world of exotic dancing, where, by the way, lots and lots of poles still exist. An August story sought to dispel the myth that "Pole Dancers Are Whores!" with the dismissive observation that "Pole dancing is not stripping. Anyone can shake their hips and take their clothes off." Just for the record, Pole Spin, not all dancers and burlesque performers just "shake their hips and take their clothes off" either, as legions upon legions of hardworking veterans of the scene will gladly attest.

Any number of physical activities can be as chaste or as intimate or as raunchy as the individual performing them makes them. They can be done with a bored shake of the hips or true virtuosity and pride. They can be as uncontroversial as a gymnastic child swinging on a piece of metal, as empowering as a healthy workout in a studio, or something done for money in a club. It's not the pole, it's the person working it. Even if it's your girl.