The Tea Party queen visits Iowa amid news she'll give a rogue SOTU rebuttal. Is she after Paul Ryan, or Obama? 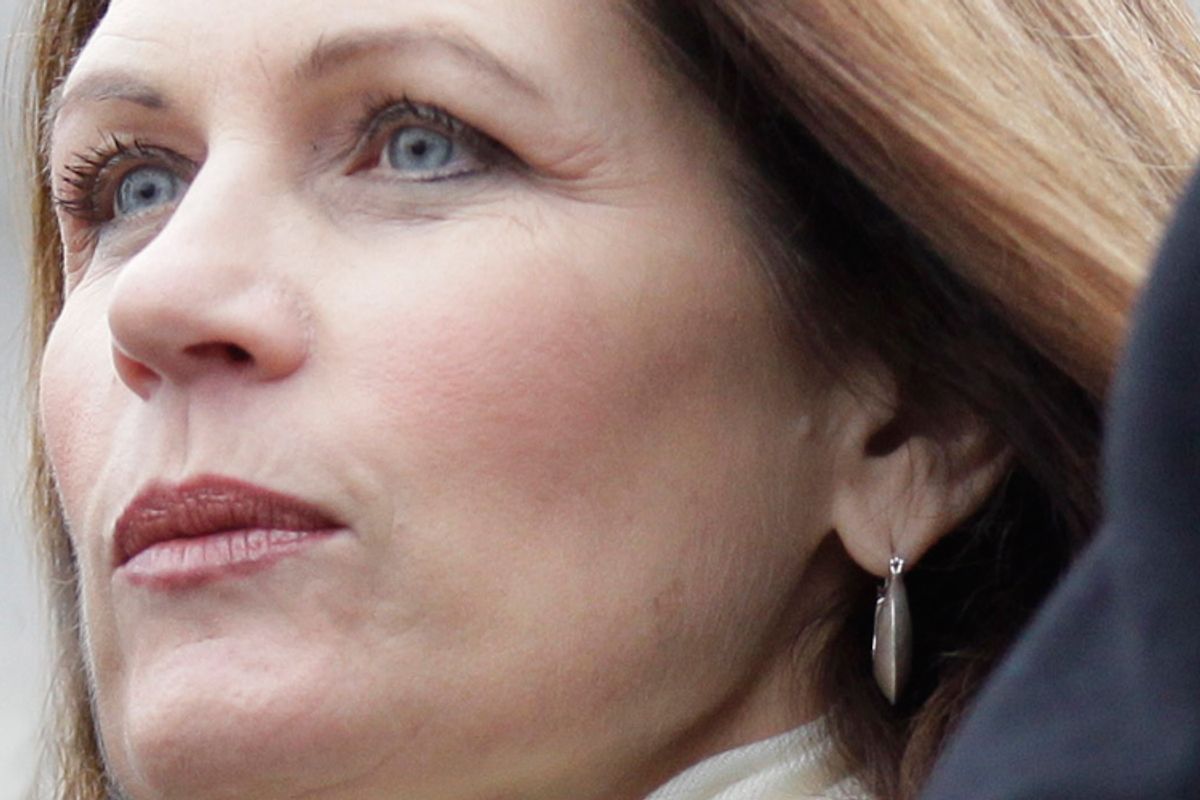 The only thing better for President Obama's reelection hopes than the GOP nominating Sarah Palin would be a Michele Bachmann candidacy. Ever since she became a public figure with a rambling McCarthyite tirade about how Congress should investigate its own "anti-American" members, on MSNBC's "Hardball" back in 2008, she's been one of the leading purveyors of Tea Party fear and division, leavened with a little bit of crazy.

The Minnesota congresswoman doesn't seem like exactly what the country needs in the wake of the Tucson, Ariz., shootings. She famously told her constituents to be "armed and dangerous" last year, and this week Bachmann urged her House colleagues to repeal not only the healthcare reform law, but to "repeal" President Obama as well. Let's give her credit: "repeal" is a little better than "reload," but we still have elections, and that's how we replace our presidents in the U.S. of A.

Will she try to replace Obama herself? Asked about a potential presidential run, a spokesman said "nothing's off the table" for Bachmann. Friday she's in Iowa, where she was born, to speak at a fundraiser for Iowans for Tax Relief. According to prepared remarks released to the Minneapolis Star-Tribune, she sees America under grave threat:

That is why I have come to speak to you tonight -- because the promise of America is under threat as never before. For twenty-one generations, the torch of liberty has been successfully passed from one generation to the next. And the question we need to ask ourselves tonight is: Will it end with us? Will we be the first generation to fail when it is our turn to pass the torch of liberty? Will we allow this great experiment in human liberty called America to end on our watch?

Exceptional! Sadly, we are in fact the first generation at risk of seeing our children do less well than we did; upward social mobility has declined dangerously in this country, but it's because of the radical redistribution of wealth and power upward that's been pushed by Bachmann and her GOP pals.

I have to say, though, I enjoyed the news Friday afternoon that Bachmann has decided to give her own rebuttal to Obama's State of the Union address Tuesday -- even though the GOP already picked designated rising star™ Paul Ryan (you can't type "Paul Ryan" without the modifier "rising star") to follow the president's address. Ryan was one of the first to oppose Bachmann's candidacy for House Republican Conference chair, and the feminist in me enjoys watching her hit back at one of her party's self-styled "Young Guns." (What grade are those guys in, anyway?) Although the Tea Party Express says it will broadcast Bachmann's SOTU rebuttal, I expect cable news to try to handle both Ryan and Bachmann -- and savvy producers may well flip to Bachmann for the entertainment value. (Ryan will find ways to say we all have to sacrifice and make budget cuts, without saying how, and definitely without revealing his plans to slash the popular Medicare program.) He's predictable; Bachmann will be must-see TV.