But will the fact that they don't even want to end the drug war end their love affair with the libertarian elite? 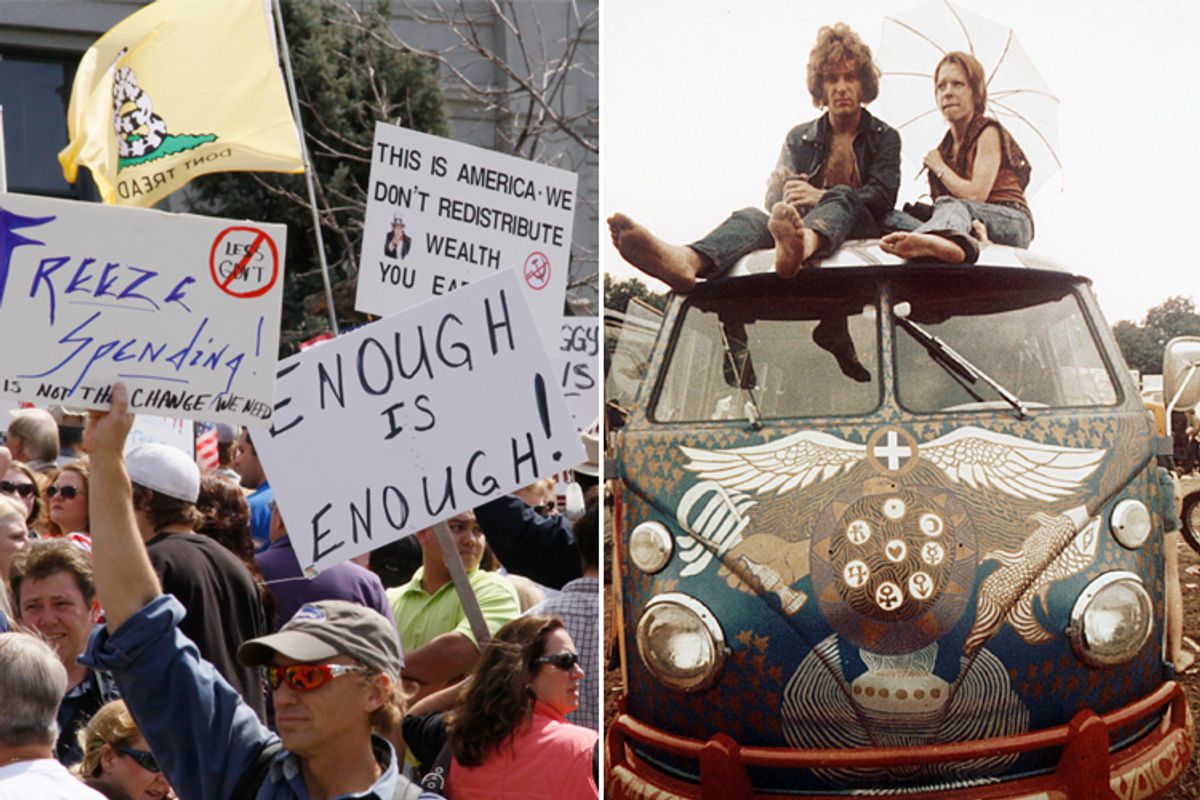 The Tea Party movement was largely embraced by institutional libertarians -- a small group, numerically, but a well-funded and influential one in Washington -- as proof of popular endorsement of their ideas about the federal government. The formerly fringey Ron Paul "outsider" shtick was suddenly much more marketable than traditional pious Republicanism, so it seemed, perhaps, that America had moved in a Randian direction.

The Cato Institute hosted a panel discussion last September with Dick Armey and Matt Kibbe about this wonderful new movement that "Establishment Democrats and Republicans" are too square to understand. According to Armey and Kibbe, "hundreds of thousands of Americans have turned out to protest the boundless growth of government spending, regulation, and debt, and call for the restoration of America's basic principles: individual liberty; fiscal responsibility; and, most important, limited constitutional government." (Emphasis mine.)

The fun part of the discussion is the beginning, when Cato's vice president for legal affairs explains why the institute is talking about a "political movement"/hawking a book by party hacks: Because the Tea Party movement is totally libertarian! Again, they love "limited constitutional government." At least, they say they do.

The Tea Partyers' fiery hatred of redistribution and resentment of societal "leeches" is certainly real, but it's apparent at this late date that most self-identified Tea Party supporters are libertarians in sound bite form only, and certainly no supporters of "liberty" as broadly defined by Reason magazine and the Cato Institute. The Tea Parties believe "liberty" means "not being governed by Democrats" -- a sentiment most libertarians would probably agree with -- but they don't seem to get the whole "live and let live" part of the deal.

Andrew Sullivan documented two examples of Tea Party illiberalism earlier this week. First of all, polling reveals that support for gay marriage is lower among Tea Partyers than among almost any group besides "conservative Republicans." Fifty-two percent of Tea Partyers don't support gay marriage or civil unions. That is not really the position of actual libertarian-leaning Republicans, let alone freewheeling libertarians.

But more damningly, various New Mexico Tea Partyers booed one of the movement's superstars for daring to suggest that a wasteful and -- let's just say it --tyrannical government campaign be ended. As reported at Ricochet:

I attended a Tea Party rally this morning in Santa Fe held on the steps of the state capital building. The keynote speaker was former Governor Gary Johnson who is rumored to be running for president. Gary is highly regarded in the state for his outstanding leadership during two terms as governor. He slashed the size of state government during his term and left the state with a large budget surplus. His speech brought enthusiastic applause from the sparse crowd. Governor Johnson should have stopped while he was ahead.

When Tea Party members were invited to ask questions, someone asked the governor if he supported legalization of marijuana. Gary responded that he did. His remarks brought a chorus of boos from the crowd. Gary went on to make the case for legalization based on the cost of incarcerating pot smokers, but the crowd wasn't having it. The boos erupted again. Some members of the crowd began to heckle the former governor. Lesson learned, I hope.

If ending the disastrous, expensive, immoral and racist drug war gets booed at a Tea Party rally in liberty-loving New Mexico, there is absolutely nothing remotely libertarian about the movement besides a visceral hatred of taxes and the conviction that undeserving Others are benefiting from them.

If the goal of both the Tea Parties and most D.C. libertarian institutions is simply to get Republicans elected, then no harm, no foul. If that's the case, the libertarians are almost embracing a traditional Republican tactic: ride into Washington with the support of the angry reactionaries, then govern on behalf of the money. All the while, Dick Armey and the various and sundry Koch-funded think tanks present the Tea Parties as the angry populists that a plutocrat can safely love, because they believe in the Constitution and they believe the Constitution considers oil and gas companies to be individuals endowed by their creators with certain inalienable rights.

News that real-life Tea Partyers -- and not Dick Armey's cartoon army of pissed-off middle-class soccer mom Antonin Scalias -- dislike certain important aspects of liberty will probably not be particularly surprising to smarter members of the libertarian elite. They already decided on the official stance of the self-aware libertarian toward the grass-roots movement of people in silly hats: They may be crazy, but as long as they hate the gubmint, we'll take 'em. So what if they also hate Muslims, homosexuals and dope-smokers?

(A post from the Cato Institute makes its cheerful willingness to abandon the non-economic planks of its platform explicit: "Candidates and representatives hoping to appeal to the Tea Party, we argue, need to focus on a unifying economic agenda that takes into account this strong libertarian undercurrent.")

Of course, there are limits. Reason's Michael C. Moynihan seemed appalled to discover that 9/12 rally participants were just as opposed to "free trade" as your average union worker. "Not one person I spoke with, in a crowd of people offering paeans to the free market, would offer an even qualified defense of free trade," he writes, "instead worrying that American industry was being 'shipped to China and India.'"

And that's the sort of thing that will actually break up the libertarian-Tea Party alliance. Being unconcerned about the world's largest prison population is one thing. Apostasy against Milton Friedman? That's serious.